Plastic bottles are the UK’s most commonly littered item by volume accounting for a QUARTER of all rubbish discarded on streets, parks and beaches, study shows

Plastic bottles are the UK’s most commonly littered item, accounting for a quarter of all rubbish discarded on streets, parks and beaches by volume, a new study reveals.

In total, 75 per cent of all litter by volume was drinks containers – not just plastic bottles but also cans, glass bottles, coffee cups and cartons.

Of the thousands of items of rubbish picked up by the charity, cigarette butts made up 66 per cent in terms of numbers.

The charity has called for new measures to tackle all types of littering, but especially drinks containers, including a comprehensive deposit return scheme.

Tackling litter is a priority for the public and for local government – in 2018 to 2019, local authorities spent £698 million on street cleansing, it said. 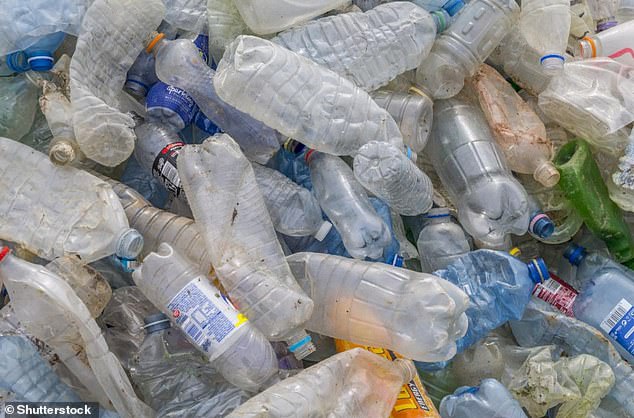 The most littered item, by volume, was the small plastic bottle (up to 750ml) for non-alcoholic drinks, which accounted for 24.4 per cent of the total, but these are joined by cans, larger bottles, glass bottles, coffee cups, takeaway soft drinks cups and cartons to create ‘a mountain of waste’ the charity said

‘It’s clear that our food on the go culture of convenience comes with real consequences, with food and drink packaging polluting our environment, which in turn costs millions to clean up and harms native wildlife and domestic plants,’ said Keep Britain Tidy deputy CEO Richard McIlwain.

For the report, commissioned by the government’s Department for Environment, Food and Rural Affairs, the charity sampled sites across the country in 2019, looking not only at the number of items dropped but at the volume of litter.

The sample comprised 3,360 sites, each made up of a square area around 160 feet across, in 14 local authorities in England.

The survey measured the presence of litter alongside six other indicators of cleanliness – detritus, weed growth, staining, graffiti, fly-posting and recent leaf and blossom fall.

The overall environmental quality of a site was clearly interrelated with levels of litter – sites with higher levels of graffiti, staining, and flyposting also had more litter present, it found.

The most littered item, by volume, was the small plastic bottle (up to 750ml) for non-alcoholic drinks, which accounted for 24.4 per cent of the total.

But these were joined by cans, larger bottles, glass bottles, coffee cups, takeaway soft drinks cups and cartons to create ‘a mountain of waste’, the charity said.

The brand items that make up the greatest proportion of litter in terms of total count are large household names, with McDonald’s emerging most frequently, followed by Coca-Cola, and Wrigley’s Extra chewing gum packaging.

Litter most likely to be dropped as opposed to placed in a bin was found to be the smaller and ‘more discrete’ items such as cigarette stubs and chewing gum packaging. 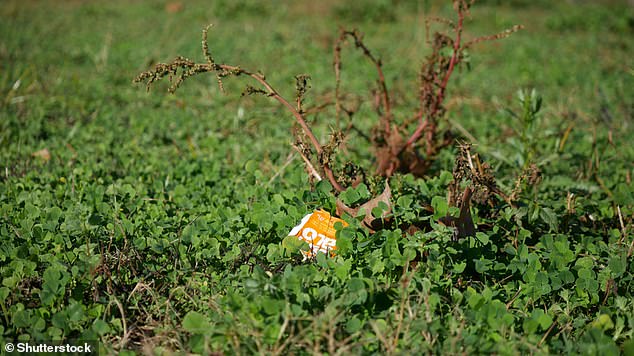 By brand, McDonald’s was the most common source of waste, accounting for coffee cups and discarded food packaging

As well as being consumed frequently on the go, these items have much ‘less stigma’ attached to them when dropped, compared with the bigger and more conspicuous items such as coffee cups.

Much like the charge on single-use plastic bags, introduced to the UK in October 2015, the charity is calling for charges on plastic-lined disposable coffee cups served at popular high street coffee branches.

Despite their eco-friendly appearance from the outside, these coffee cups feature a thin layer of polyethylene on the inside to make them liquid-proof.

For this reason, they’re often too expensive to process for many recycling plants and are usually classified as waste for landfill.

Keep Britain Tidy says the country needs a well-designed and comprehensive deposit scheme as soon as possible for all sizes of plastic, glass and aluminium drinks containers. 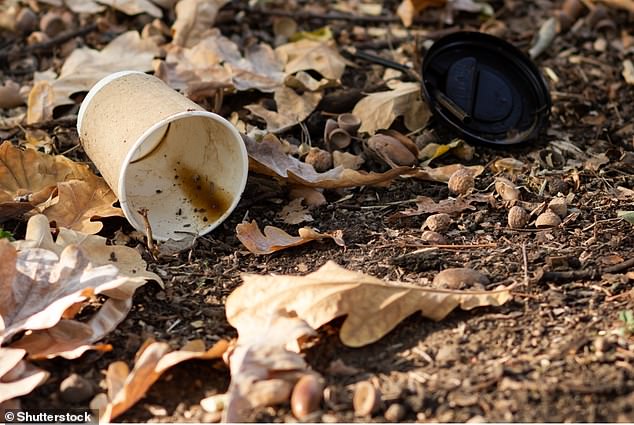 Keep Britain Tidy is calling for the introduction of a charge on single-use plastic and plastic-lined cups, including those use for take-away coffees and cold drinks

In South Australia, for example, there is a 10 cent deposit and refund on most beverage containers, including beer, as indicated on the label.

The UK government plans to introduce a deposit return scheme for drinks bottles and cans in 2023 and it ‘must ensure this timescale does not slip, Keep Britain Tidy said.

Elsewhere in the report, the charity reveals that cigarette butts are littered more than anything else, accounting for 66 per cent of all litter items dropped by number.

This was followed by ‘general litter’, other forms of paper, and smoking-related litter, excluding stubs . 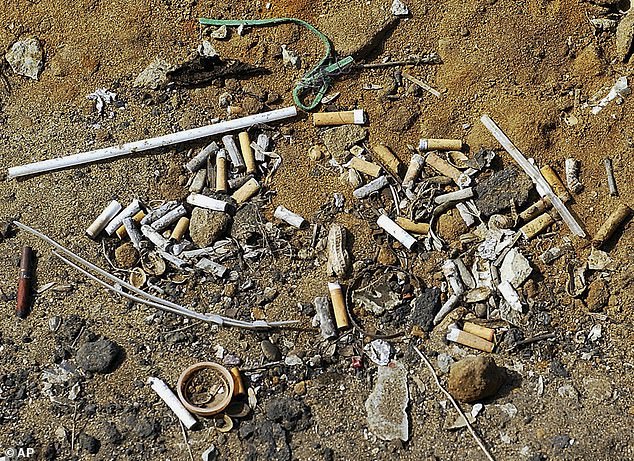 Cigarette butts on Fletcher Cove in Solana Beach, California. Cigarette butts are a dangerous contaminant and the most commonly collected form of plastic pollution

Government has already said it will introduce an ‘extended producer responsibility’ (ERP) system for packaging in 2023.

This will ensure brand owners and manufacturers take environmental responsibility for their products and the associated packaging when they become waste.

However, Keep Britain Tidy believes this needs to be extended to cigarette butts, which consist of the commonly orange-tinted filter.

Filters are made of type of single-use plastic called cellulose acetate, which means they aren’t biodegradable, and can transport the harmful chemicals in cigarettes to natural ecosystems.

‘Given the prevalence of cigarette litter we believe government should ensure that EPR is applied to the tobacco industry, not just for cigarette packing but for cigarette butts,’ said McIlwain.

Despite making up two-thirds of all littered items by amount, cigarette butts account for only 0.2 per cent by volume, the report said.