Archaeologists in Egypt have uncovered tools used in the worship of the fertility goddess Hathor, including a limestone pillar in her likeness.

Widely worshipped in ancient Egypt, Hathor was a sky deity associated with femininity, love, marriage and childbirth who was often depicted as a cow or hearing a headdress with cow horns.

The instruments were found earlier this month on the site of Buto, an ancient city in modern-day Kafr El-Sheikh, about 80 miles north of Cairo in the Nile Delta.

The tools include incense burners, a well for sacred water, a small birthing chair and the remains of gold scales used for gilding other objects.

‘It is one of the important discoveries because it includes the tools that were actually used in performing the daily religious rituals for goddess Hathor,’ Mostafa Waziri, secretary-general of the Egyptian Ministry of Tourism’s Supreme Council of Antiquities, said in a statement.

The discovery was made during the excavation of a temple at a site known as Tell El Fara’in, or ‘the Hill of the Pharaohs,’ where researchers also found inscriptions with the names of Egyptian kings who reigned more than 2,500 years ago. 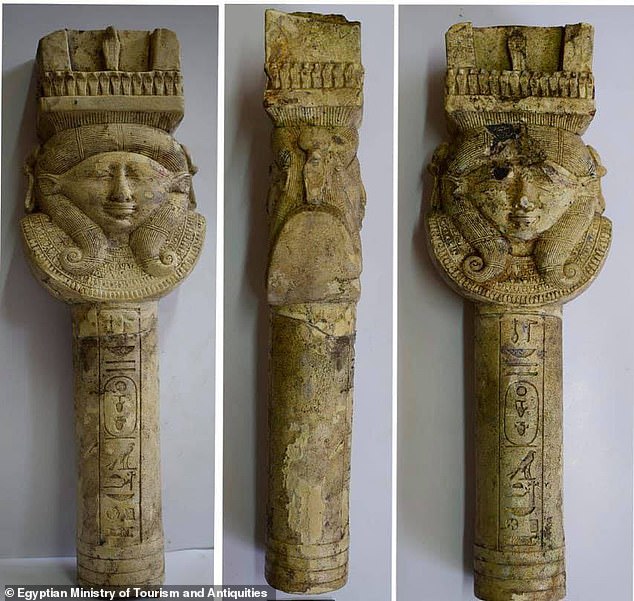 A limestone pillar depicting the fertility goddess Hathor was unearthed at the site of a temple dedicated to her worship in Kafr El-Sheikh, Egypt

Emerging in the third millennium B.C., Hathor was a major figure in ancient Egyptian religion, with more temples devoted to her than any other goddess.

She was also viewed as the ‘eye of Ra,’ a female counterpart to the sun god that could serve as his mother, sibling, daughter, or consort and who would wreak vengeance on his enemies.

A pure gold symbol of the eye of Ra was also found at Tell El Fara’in. Alternately known as a ‘wedjat eye,’ or ‘Eye of Horus,’ it was considered a talisman that bestowed health and protection on the owner.

The incense burners were made of faience pottery, a tin-glazed earthenware considered to be magical and ‘filled with the undying shimmer of the sun and imbued with the powers of rebirth,’ according to Metropolitan Museum of Art curator Carolyn Riccardelli.

‘This man-made substance allowed the Egyptians to make a wide variety of objects covered in shiny, bright blue glaze—a color that was closely linked with fertility, life, and the gleaming qualities of the sun,’ Riccardelli said. 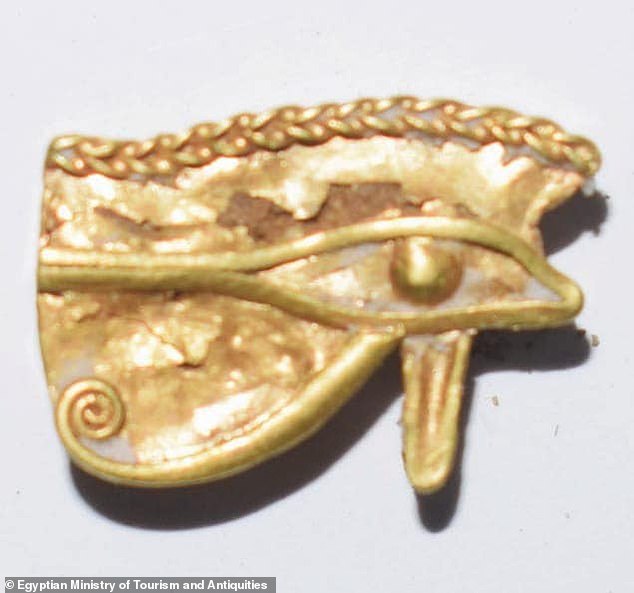 A solid gold Eye of Ra talisman was among the artifacts uncovered by archaeologists. The amulet is a symbol of Hathor, said to be Ra’s ‘eye,’ and was believed to bring its owner protection and good health 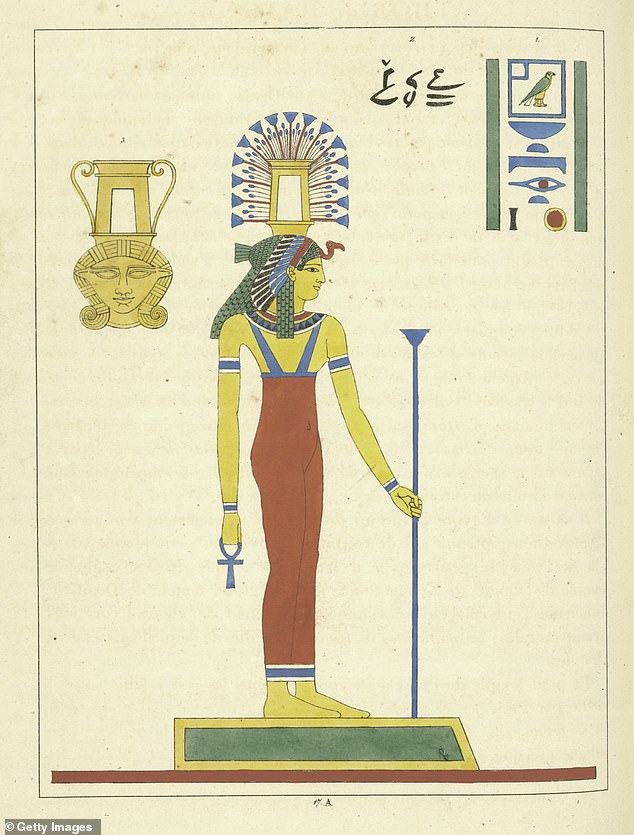 Hathor (depicted above) was a sky god associated with love and fertility and often depicted with cow horns. Emerging in the third millennium B.C.,  she became a major figure in ancient Egyptian religion, with more temples devoted to her than any other goddess

One burner depicts the falcon-headed god Horus, Hathor’s husband and the Egyptian god of war. 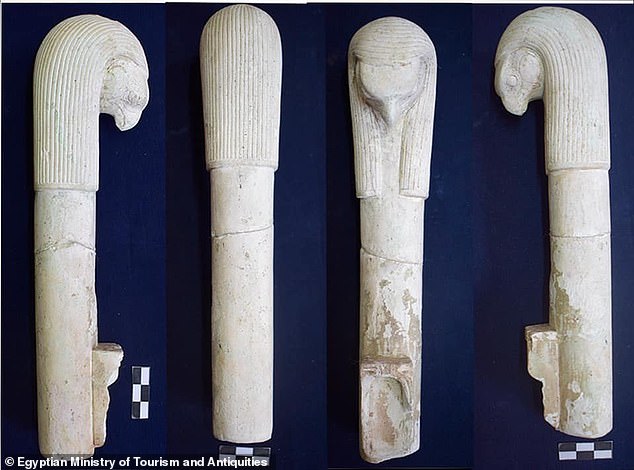 Incense burners made of faience pottery, a tin-glazed earthenware considered to be magical, were found on the site. Pictured: An incense burner depicting Horus, Hathor’s husband and the Egyptian god of war

Excavating the complex, known as the Temple of the Pharaohs, archaeologists also discovered a mud-brick bathing room with a small basin, a vessel for heating water, and a tub with a primitive plumbing system, according to Hossam Ghoneim, director-general of antiquities in Kafr El-Sheikh. 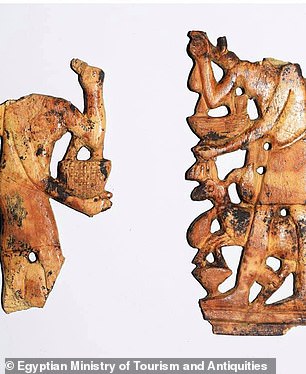 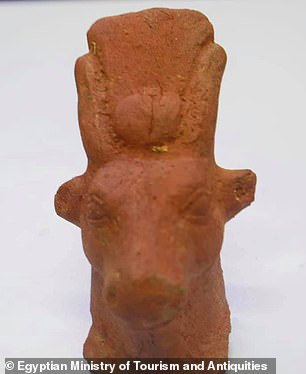 Other artifacts found at the temple include ivory reliefs carved with scenes of daily life, including women carrying offerings, and a small statue of Hathor depicted with a cow’s head

In addition to being Horus’ wife, Hathor was also considered the mother of pharaohs: A partially preserved painting at the site depicts an Egyptian king performing rituals at the temple.

Hieroglyphics found on the walls of the temple include the five titles of King Psamtik I, who ruled from 664 to 610 B.C., as well as the names of two other 26th dynasty pharaohs, Waha Ip-Ra and Ahmose II. 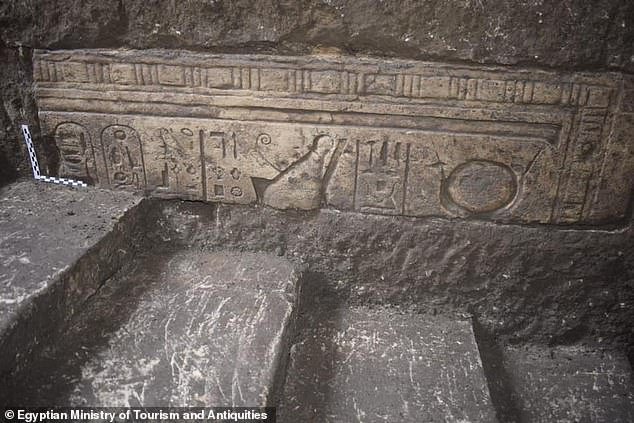 Hieroglyphics found on the wall include the five titles of King Psamtik I, who ruled from 664 to 610 B.C., as well as the names of two other 26th dynasty pharaohs, Waha Ip-Ra and Ahmose II

About 60 miles from Alexandria, Buto was called Per-Wadjet by ancient Egyptians and was the capital of Lower Egypt until it was unified with Upper Egypt around 3100 B.C.

The area has proven a wellspring for archaeologists, who have previously unearthed a palace dating to the Second Dynasty (2890-2686 B.C.) and six Greek bathhouses, according to Middle East new site The National.