A case for the iPhone 13 has been put through its paces, after it was sent hurtling down a zipline at 100 miles per hour with a £779 Apple phone.

Accessory brand Mous wanted to prove how protective their cases were, so sent a flagship iPhone in their new cases down the world’s fastest zipline in Bangor, Wales.

The stunt comes as Apple’s latest flagship phone, the iPhone 13, finally went on sale today – after months of speculation and anticipation from Apple fans worldwide.

Famed for their iPhone case stunts, Mous has previously conquered a helicopter drop and even a launch into space to prove they can keep the phone safe.

Most ziplining enthusiasts wouldn’t take their phone along for the ride, but Mous CEO and co-founder, James Griffiths, went hurtling over a quarry with a brand new iPhone 13 cocooned in the ultra-protective ‘Limitless 4.0 case’.

The phone, case and even the CEO survived the 100mph drop from the zipline onto the rocky path below, the firm exclaimed. 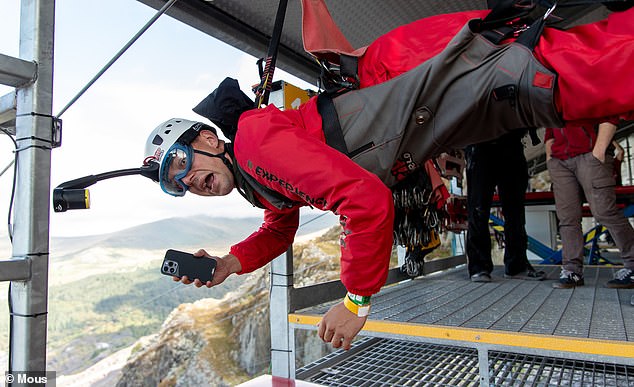 Most ziplining enthusiasts wouldn’t take their phone along for the ride, but Mous CEO and co-founder, James Griffiths, went hurtling over a quarry with a brand new iPhone 13 cocooned in the ultra-protective ‘Limitless 4.0 case’

Earlier this month, Apple unveiled four new phones that make up the iPhone 13 range – the mini, iPhone 13, the Pro and the largest model, the Pro Max.

They were announced along with a new Apple Watch and iPad mini.

The iPhone 13 includes a sleek design and ceramic front shield, an advanced dual camera system that captures 47 per cent more light and a hefty increase in battery life – 2.5 more hours than the iPhone 12.

With every new iPhone comes a new round of cases, although the iPhone 13 models use the same form factor as the previous generation.

Instead it includes subtle changes that improve performance and user experience, . for example, the Face ID notch is 20 per cent smaller than the iPhone 12 version.

The latest device is powered by Apple’s new A15 Bionic Chip, and includes an up to 50 per cent faster CPU and up to 30 percent faster graphics.

Despite there being no change in form factor, new cases are often released with a new phone, and that includes a new stunt from Mous.

‘Every year we do something seriously extreme to test our new iPhone cases and we always try something more daring than we’ve ever done in the past,’ said Griffiths. 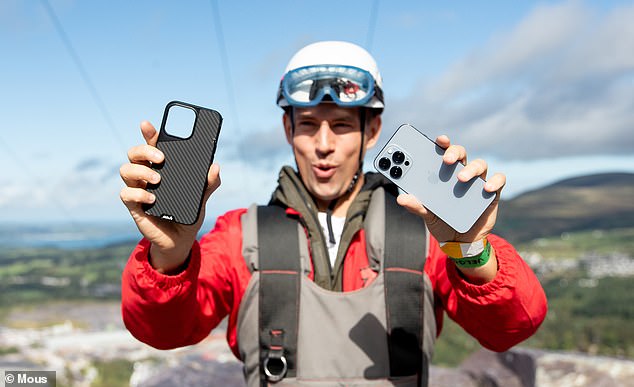 Accessory brand Mous wanted to prove how protective their cases were, so sent a flagship iPhone in their new cases down the world’s fastest zipline in Bangor, Wales, accompanied by CEO James Griffiths

‘It can be tough to think up more intense drop-tests but we think 100mph fits the bill,’ he said, while at the site of the zipline stunt in Wales.

Lucy Hutchinson, CBO and co-founder of Mous, said they have a policy of ‘show, not tell’ when it comes to promotion, and take it seriously.

‘We make really big claims about how protective our products are, but we’re also really serious about proving that those claims are true. I reckon that we’ve proven today that our cases are just as protective as we promise.’

The new iPhone 13 was dropped in the Limitless 4.0 case, Mous’s signature range, containing impact-absorbing technology from a drop or shock. 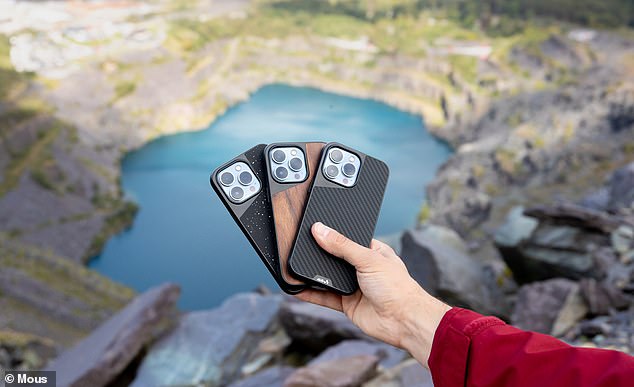 The phone, case and even the CEO survived the 100mph drop from the zipline onto the rocky path below, the firm exclaimed

This is designed to stop the energy from that shock going into the phone and damaging expensive technology, including the screen.

Mous was one of the first tech brands to respond to Apple’s MagSafe when Apple relaunched MagSafe last year for iOS devices.

Griffiths said, ‘We started Mous because we realised that your tech accessories could actually enhance and expand your day-to-day technology.

‘The whole idea is that you should be able to ask for more from your tech – especially the tech you use every day.’

Apple iPhone 13 review roundup: ‘Bigger battery’, ‘better camera’ and it even comes in pink – but is it worth the $799 upgrade?

The Wall Street Journal’s Joanna Stern said all four devices have ‘noticeable forward strides,’ including battery life, while highlighting the aggressive promotions from the carriers  (AT&T, Verizon and T-Mobile) to win customers.

However, Stern lamented that some of the camera and video improvements fell short of Apple’s promise in her eyes.

‘[T]he results weren’t drastic enough that someone with an iPhone 12 would need—or even want—a regular iPhone 13,’ Stern wrote.

‘It was only after looking at the photos side by side on my monitor that I could spot differences—better handling of city lights, reflections in the water. Compare it to an iPhone XR or iPhone 11, though? The difference is much clearer.’

CNet reviewer Patrick Holland was impressed with the Cinematic mode on the iPhone 13, especially on the Pro.

‘What makes the video compelling is that everything but your subject is out of focus,’ Holland wrote.

‘The iPhone can even execute a rack focus from one subject to another. The effect is dramatic and impressive.’

Holland was also impressed with Apple’s iOS 15 operating system on the Pro devices, noting it ‘adds a bunch of features but doesn’t mess with the status quo.’

The New York Times reviewer Brian Chen was ho-hum about the new models, calling it perhaps ‘the most incremental update ever to the iPhone.’

Chen noted that the newest iPhone is only 10 percent than the prior year’s models, while the higher refresh rate on the more expensive Pro and Pro Max models are ‘hardly a game changer.’

However, Chen also noted the cameras are better than the prior year’s models, especially in low-light.

‘The improvements in the new iPhone cameras were most visible in lowlight photos taken with night mode, which captures multiple pictures and then fuses them together while making adjustments for colors and contrast,’ Chen wrote.