Look up tomorrow night! Orionids Meteor Shower will peak on Friday evening – with up to 20 shooting stars flying overhead every hour

If you’re a fan of stargazing, make sure you’ve got an eye to the skies tomorrow night.

A ‘beautiful’ meteor shower called the Orionids will be visible with the naked eye when it peaks on Friday evening.

The Orionids occur every autumn when Earth passes through a stream of debris left by Halley’s Comet, filling the sky with ‘prolonged explosions of light’, NASA says.

This year, the annual shower will peak on the night of October 21-22 between midnight and dawn (Friday evening to Saturday morning).

During this period, there could be 20 shooting stars flying overhead every hour, each travelling at speeds of up to 41 miles (66 kilometers) per second. 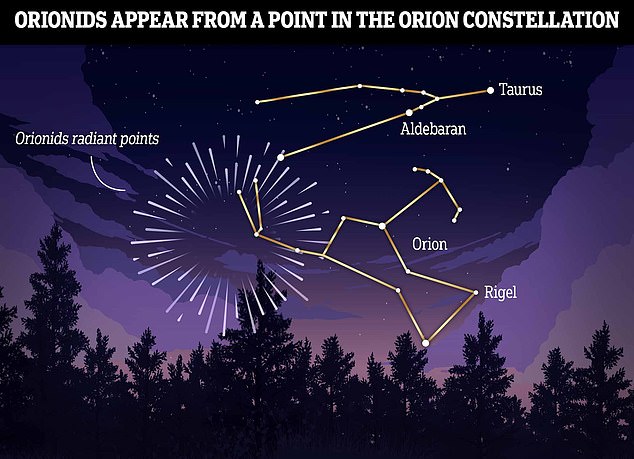 The radiant for the Orionids (the point in the sky the meteors appear to come from) is in the constellation of Orion, hence the name ‘Orionids’ 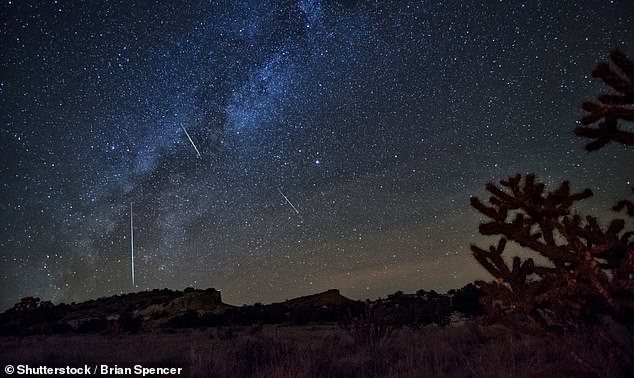 Described as ‘one of the most beautiful showers of the year’, the Orionids (pictured here in 2016) occur every autumn when Earth passes through a stream of debris left by Halley’s Comet

What is the Orionid meteor shower?

The Orioinid shower is made up from the remnants of Halley’s Comet. The comet itself was last seen in 1986 and is not due to brighten Earth’s skies again until 2061.

But each year in mid-to-late October, Earth passes through the comet’s dusty debris. When this happens the pre-dawn sky can light up with a stunning display of shooting stars.

People living in North America, Europe, most parts of Asia, and northern parts of South America can to see the meteor shower by looking towards the south-eastern sky.

Those who live in the southern hemisphere can see the shower by looking to the north eastern sky.

‘The Orionids, which peak during mid-October each year, are considered to be one of the most beautiful showers of the year,’ NASA says.

‘Orionid meteors are known for their brightness and for their speed. These meteors are fast – they travel at about 148,000 miles per hour (66 km/s) into Earth’s atmosphere.

‘Fast meteors can leave glowing “trains” (incandescent bits of debris in the wake of the meteor) which last for several seconds to minutes.

To find the Orionids, members of the public should find a spot away from streetlamps and other sources of light pollution.

The meteors can be seen with the naked eye so there’s no need for binoculars or a telescope, although a period of 20 minutes is advised to allow the eyes to adjust to the dark.

The radiant for the Orionids – the point in the sky the meteors appear to come from – is in the constellation of Orion, hence the name ‘Orionids’.

The Met Office told MailOnline that forecasts are looking good for the time of the meteor shower’s peak.

‘On Friday night, the best chance for seeing the Orionid meteor shower will be across England and Wales, where skies will become increasingly clear as the night wears on,’ said the Met Office’s senior operational meteorologist Dr Matthew Box.

‘Unfortunately, Saturday night looks set to be rather cloudy across much of the UK with far fewer breaks and so my recommendation would be for any budding comet-gazer to make the most of Friday night.’

According to Royal Observatory Greenwich, the Orionids is an ‘extra-special’ display that reliably produces shooting stars that are visible across the globe.

The Orionid meteor shower should be visible from anywhere on Earth, and can be seen anywhere across the sky.

Look for the shape of Orion the Hunter, and the meteor shower’s radiant will be near Orion’s sword, to the north.

To make sure you get the best view of the shower, get far away from light pollution – such as city lights.

The shower will be most visible at around 1:30am on the early morning of October 20 and 21 .

Experts recommend you let your eyes adjust to the dark for 20 minutes.

They’re viewable in both the Northern and Southern hemispheres in the hours after midnight.

The moon will also be at less than 20 per cent illumination, meaning moonlight shouldn’t dim our view of the shooting stars.

When comets come around the sun, the dust they emit gradually spreads into a dusty trail around their orbits.

Every year, Earth passes through these debris trails, which allows the bits to collide with our atmosphere where they disintegrate to create fiery and colourful streaks in the sky.

However, the events don’t pose a threat to humans as the objects nearly always burn up in our atmosphere before reaching the planet’s surface.

Halley’s comet, which left the sand grain-sized particles that produce the Orionids, comes around the inner solar system every 75 or so years.

In the meantime, we’re left with viewing the meteor shower that comes from its ‘comet litter’ as it flies through the atmosphere. 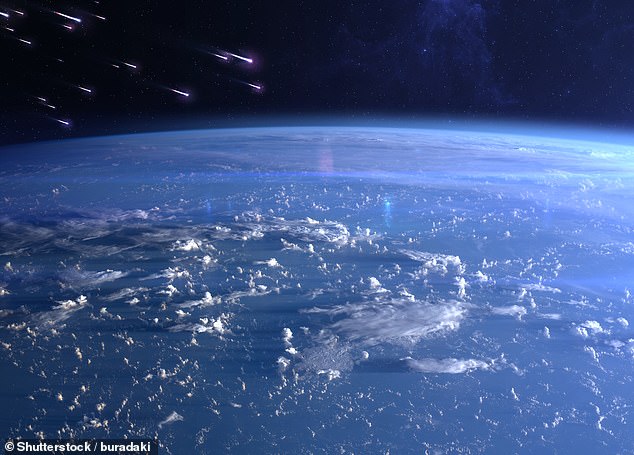 It is one of two showers created by the debris from Halley’s Comet; the other is the Eta Aquariids in May.

Following the Orionids, there’s a handful of meteor showers still set to take place this year, including what NASA calls the ‘best meteor shower of the year’, the Geminids.

Royal Observatory Greenwich says the Geminids gives up to 100 shooting stars per hour, and are thought to be intensifying every year.