If men are from Mars, women are from Venus, then Reddit men are from another galaxy completely. It’s the only explanation for how wild they treat other people in their lives, especially this dad. A mom of 2 posted about her husband — of 13 years!!! — spying on her through their home security camera, and it makes my skin crawl just thinking about it.

In the “Am I The A—hole?” subreddit, this mom of a 7- and 11-year-old kids posted about her husband’s insane reaction to her turning off their home monitoring device. First, some context.

“About 4 years ago when my husband of 13 years and I bought our house, we got a security system. Included in the bundle was an indoor-only camera,” she wrote. “While I liked the idea of having it monitor for movement when we weren’t home, my husband wanted it on all the time, even while we were home. This made me somewhat uncomfortable but I came around to the idea.”

So from the very beginning, the dad wanted the camera on at all times — weird right? Especially knowing that it made your wife uncomfortable and insisting on it anyway. But they found a good use for it because their kids were younger at the time.

The mom wrote that it was “almost like a baby monitor” to watch over their kids, who were 3 and 7 then. “Our 3 year old was non-verbal at the time and sometimes his older brother would craft up some crazy story as to how he got hurt 😅,” she wrote, adding that the camera also came in handy in other situations such as figuring out “what time we put the pizza in the oven if we forgot to start a timer, or to figure out who stole the cookies from the cookie jar.”

I mean, I get it. But at the same time, how often does stuff like that really happen? 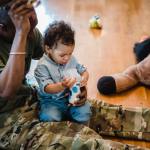 The wife felt like it was becoming a little unnecessary as her kids got older, so she did what any reasonable adult would do: turn it off.

“Fast forward to this August,” she said. “One day I’m chilling at home by myself while the kiddos were at school and I just kinda realized it’s weird to have a camera recording me chilling and watching shows. So I turned it off.”

NBD, right? But her husband reacted in a weird way. “This triggered something in my husband and made him very upset.”

Like? Why? How did he immediately know she turned it off? Why was he staring at her while she was at home alone watching TV? It’s giving serious stalker vibes.

“We’ve had multiple conversations about it,” she continued, which seems odd given that it should be as simple as saying, “Hey, I don’t like the camera on when I’m home it’s creepy,” to which he could respond, “OK.” Yet, she had to keep justifying why she wanted it off.

“I feel like the kids are old enough now that we dont need to monitor them like this anymore. And using a camera to prove/disprove their honestly is not the best parenting,” she continued. “But he wants the camera on 24/7…. even if we both are right there watching the kids.”

This is super weird! And this husband doesn’t care. The mom wrote, “I feel like that argument is an uphill battle. So I simply don’t want the camera recording me when I’m home alone or when it’s just me and our kids.”

It gets even more toxic from there.

“He claims that me not wanting the camera on is not respecting him as head of the household and he will repeatedly turn it on anytime I turn it off,” she added. “I feel like it’s weird and controlling. But I don’t have any other good reason for not wanting it on. He wants to still use it to monitor the kids and use to figure out what time something happened.”

And, the claws are coming out. He obviously is using the kids as an excuse to monitor and control his wife’s every move, which is so abusive. Redditors thought so too.

“NTA. And you should probably be paying more attention to the massive red flag that is ‘the head of household,’” one person wrote, and we couldn’t agree more. “Those are the words of someone that doesn’t value you as an equal partner in your marriage. Not sure what your work situation is, but the non-paid domestic work of women needs to be recognised and regarded equally with the financial contributions made. 🚩🚩🚩”

Another person commented, “A security camera for at night or when you’re away is fine. Using it to monitor people you’re in the house with is weird and controlling. The disrespecting him bit is an enormous problem. And the fact that he isn’t listening to her say she is uncomfortable is an enormous problem as well. If he doesn’t listen and work to make sure his wife is comfortable in her own home AND drop the head of house machismo shit she needs to leave. This is not ok.”

“If OP’s husband calls himself ‘the head of the household’, OP has bigger problems than a living room camera.” Couldn’t agree more! Head of household is outdated and misogynistic — there will be none of that here, thank you.

Sorry, what? That camera needs to be destroyed ASAP.

Someone added, “Also, you may want to just put something over the camera if he can turn it on remotely… like a business card for marriage counseling.” LOL — love that idea!

“Put a paper bag over it. And then get a divorce,” another person suggested.

“He’s probably using the camera to make sure she’s at home so he can be out with who ever and know where wifey is at,” another pointed out. “He can also see her calling him and what her body language says or how she’s acting. That camera would have an accident in my house.”

In another comment, the mom wrote, “Sooooo I’m working on deconstructing some unhealthy things I was raised to believe about relationships. I used to absolutely believe that as a woman, I was secondary. I believe in the beginning of our marriage 10+years ago, I probably was much more submissive and I definitely used to feel like he should have the final say on SOME family decisions. But I’ve come to realize that I’m not treated as equal and that I’m not always getting a say in things.”

We love that she is growing in self-esteem and realizing that the way her husband is behaving is not OK! She also revealed that he is extra suspicious of his wife because he himself has cheated on her in the past.

“I’m literally an open book and have always told him if a stranger hit on me or winked at my at a stop light or something,” she wrote. “And I literally go no where except work, church, and occasionally my best friends house (by my own choosing). I do wonder if it’s because he already has cheated in the past and thus he feels suspicious for nothing.”

Whoa. He sounds like he’s projecting his own behavior onto her, and/or still cheating and using the camera as a way to make sure he doesn’t get caught.

Even if none of that is true, the fact that she told him it made her uncomfortable and he demanded she leave the camera on anyway is enough of a red flag to know that the relationship is abusive. No one has to put up with that behavior!