Kiss me squeak: Orangutans communicate using a ‘language’ of 11 noises and various gestures to tell others to ‘climb on me’, ‘stop that’ and ‘move away’, study finds

Orangutans have a primitive form of language which they use to communicate, a new study claims.

Various sounds — including a ‘kiss squeak’, ‘raspberry’ and a ‘gorkum’ — have clearly defined meanings which are understood by the apes.

Researchers from the University of Exeter found that wild Borneo orangutans can instruct another to ‘climb on me’, and also request to ‘climb on you’.

‘Resume play’ was another one of the remarks made by the orangutans, the scientists said. 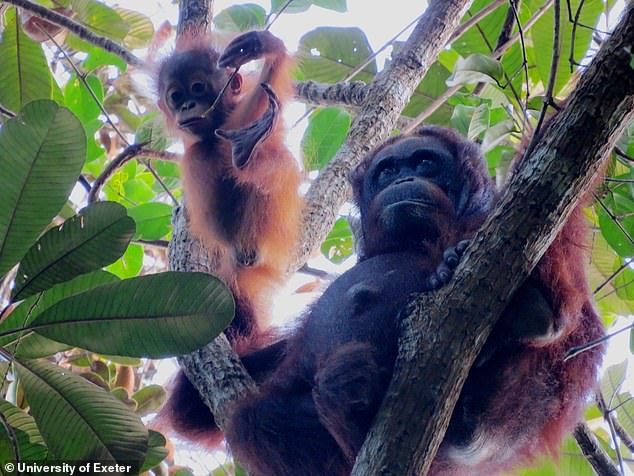 Various sounds — including a ‘kiss squeak’, ‘raspberry’ and a ‘gorkum’ — have clearly defined meanings which are understood by the apes. A ‘language’ of 11 vocal signals and 21 ‘physical gestures’ were spotted from video footage. Pictured, two apes studied in the research

WHAT SOUNDS DO ORANGUTANS USE?

A ‘language’ of 11 vocal signals and 21 ‘physical gestures’ was identified from video footage of 16 orangutans (seven mother-child pairs and a pair of siblings).

A grand total of 1,299 communicative signals – 858 vocal signals and 441 gestures – were seen, allowing the researchers to discern what they meant.

Vocalisations include a sharp kissing noise created while inhaling (kiss squeak), a low drawn out sound made during inhalation (grumph) and a kiss squeak followed by multiple grumphs – a sequence dubbed the gorkum.

The apes were highly responsive to gestures and noises, reacting either before the sound had finished or less than a second afterwards in 90 per cent of instances.

‘We observed orangutans using sounds and gestures to achieve eight different ‘goals’ – things they wanted another orangutan to do,’ said University of Exeter scientist Dr Helen Morrogh-Bernard, founder and co-director of the Bornean Nature Foundation (BNF).

The eight identified ‘goals’ of communication were: ‘acquire object’ (signaller wants something), ‘climb on me’, ‘climb on you’, ‘climb over’, ‘move away’, ‘play change: decrease intensity’, ‘resume play’ and ‘stop that’.

Dr Morrogh-Bernard adds: ‘Orangutans are the most solitary of all the apes, which is why most studies have been done on African apes, and not much is known about wild orangutan gestures.

‘We spent two years filming more than 600 hours of footage of orangutans in the Sabangau peat swamp forest in Borneo, Indonesia.

‘While some of our findings support what has been discovered by zoo-based studies, other aspects are new – and these highlight the importance of studying communication in its natural context.’

The research, published in International Journal of Primatology, found juvenile orangutans favour physical gestures of noises, whereas adults divvy it up equally.

Touching was more commonly used when communicating with an orangutan that was not paying attention.

Vocal communication increased when the other orangutan was out of sight.

WHAT ARE THE DIFFERENT SPECIES OF ORANGUTANS?

Until recently, scientists thought there were only two genetically distinct types of orangutan, Bornean and Sumatran.

But in 1997 biological anthropologist Erik Meijaard observed an isolated population of the great apes in Batang Toru, south of the known habitat for Sumatran orangutans.

Scientists began to investigate if it was a unique species.

Researchers studied the DNA, skulls and teeth of 33 orangutans killed in human-animal conflict.

They then concluded that they had discovered a new species, giving it the scientific name Pongo tapanuliensis or Tapanuli orangutan.

The newly discovered species numbers about 800 individuals and is critically endangered.