Orangutans instinctively know how to use hammers to crack nuts and do not need to be taught, study reveals

Scientists at Germany’s University of Tübingen have learned that orangutans living in zoos can use tools to crack nuts, becoming one of just a few species of primates with the capability of doing so.

Additionally, some of the orangutans did not observe the behavior from others, a fact that surprised the researchers. 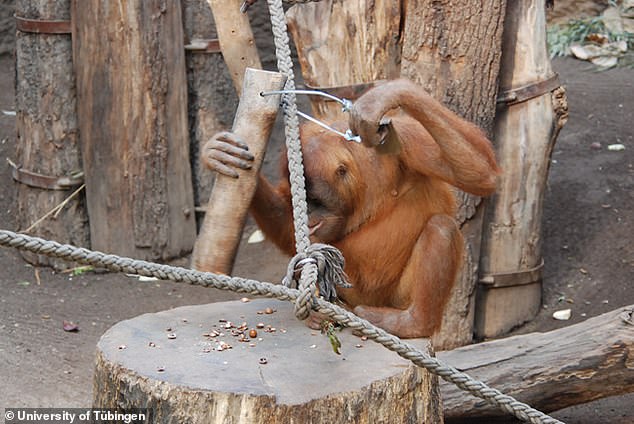 Scientists have learned orangutans living in zoos can use tools to crack nuts. Some of the orangutans did not observe the behavior from others, surprising researchers 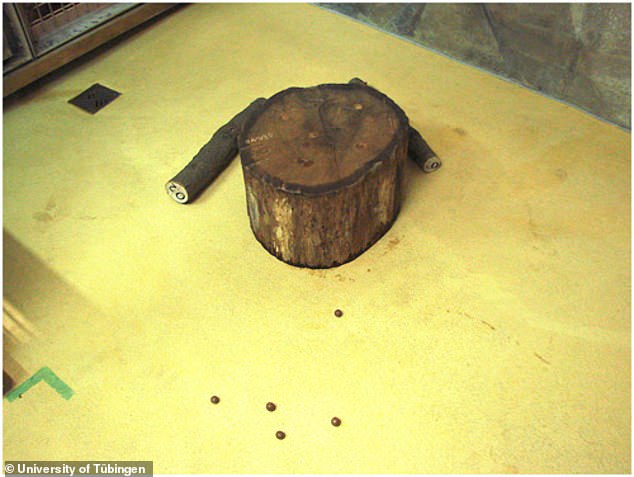 Of the 12 orangutans tested, four (one in Leipzig and three in Zurich) used the wooden hammers to spontaneously crack the nuts, despite having no experience at all.

‘The orangutans can even develop this complex behavior purely through individual learning,’ said the study’s lead author, Elisa Bandini, in a translated statement.

One orangutan tried to use an anvil (a tree root or stone) as a hammer, but when the anvil was fixed to the ground, the orangutan used the wooden hammer to get the nuts cracked.

The other three orangutans, all older, used their hands or teeth to help crack the nuts.

‘For those three larger animals, biting the nuts got them what they wanted,’ said study co-author, Claudio Tennie, in the  statement.

‘After chimpanzees, the orangutans are the great apes with the second largest repertoire of known tool use. So far, however, wild animals have not been observed cracking nuts,’ Tennie added in the statement.

Just a few species of mammals have been known to crack nuts in the wild – chimpanzees (which can also use tools without observing others), capuchins and macaques – long considered one of the complex behaviors of tool usage. 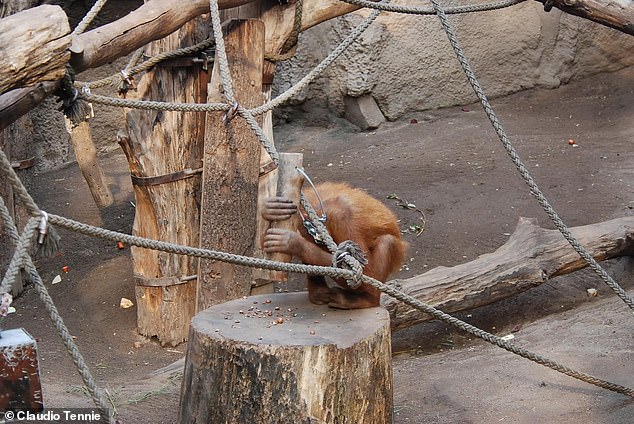 Of the 12, four used the wooden hammers to spontaneously crack the nuts, despite having no experience at all

Some researchers thought that this behavior required the ability to be learned, but that however, is not the case, Baldini explained.

‘Up to now, science had assumed the opposite assumption and had even expected that the skill would become extinct in great apes if it could not be passed on culturally.’

The study was published earlier this week in the American Journal of Primatology.

WHEN DID HUMANS START USING TOOLS?

It is hard for scientists to say precisely when humans started making tools because the more primitive remains look like a natural object rather than a human artefact.

The oldest-known instruments are the Oldowan stone tools from Ethiopia, which date back about 2.6 million years.

The Acheulean tool technology period – up to 1.76 million years ago – featured large stone hand axes made from flint and quartzite.

Towards the end of this period, the tools became more refined and then followed the so-called Levallois technique, which saw the creation of scrapers, slicers, needled and flattened needles.

About 50,000 years ago more refined and specialised flint tools were made and used by Neanderthals and it is believed it was at this stage tools were constructed out of bone.

As human culture advanced, artefacts such as fish hooks, buttons and bone needles were used.

Cut marks have found on animal bones that have been dated to be 3.4 million years old – around the time that a squat ape-like ancestor called Australopithecus afarensis – known as Lucy – roamed Africa.