As millions of Americans begin the long trudge from work-from-home back to work-at-actual-workplace, they confront a familiar, sometimes uncomfortable dilemma: What to wear on their feet.

High heels, wingtips, work boots, all manner of confining and constrictive shoe, even loafers, have moldered in closets and gathered dust under beds, no love lost. One, uh, friend has basically been barefoot for the past year, padding around the house confident that his toes, unbound, have rediscovered their splayed, prelapsarian selves.

This all has been terrible for the dress-shoe business, if somewhat less so for the shoe-media business, where the headlines have lately pivoted from the likes of “Shoe Repair Stores Used to Be a Good Way to Make a Living” to “Post-Pandemic Shoes: The Hunt.” But before you shell out for those Balenciaga stiletto Crocs or the new Isabel Marant wedge sneakers (“boulders of suede,” as a colleague helpfully described them), archaeology has some advice from the grave: Whatever shoes you choose, let them not be pointy.

Recently, researchers discovered that a “plague of bunions” had visited medieval England, evidently inflicted by the ridiculously pointy shoes fashionable at the time. The team inspected 177 skeletons in Cambridge dating from the 11th to the 15th centuries and found that 18 percent of them, all in the later centuries, showed signs of hallux valgus, a condition wherein the big toe points inward toward the others and the first joint becomes an exposed and sometimes painful protuberance — a bunion.

Hallux valgus is the most common foot deformity today, seen in roughly one in four people, and our shoes are typically to blame. “My grandmother had it, where her big toe was crossed over the top of her next toe and you had that really sharp angle,” said Jenna Dittmar, a paleopathologist at the University of Aberdeen and the lead author on the study. “She definitely wore heels. They weren’t particularly high, but she did wear heels until the day she died.”

In England, the likely culprits were poulaines, shoes with a narrow toe that could run two to a dozen or more inches long, like the bill of a marlin or something the Wicked Witch of the West might wear — only wickeder. They were more often worn by men than women, and they were poorly suited to walking or, it seems, even standing. Dr. Dittmar and her colleagues found that skeletons with funky toes were much more likely to have fractured bones on their wrists or arms, indicating a fall. (The clinical term is FOOSH — “falls on outstretched hand” — injuries.) 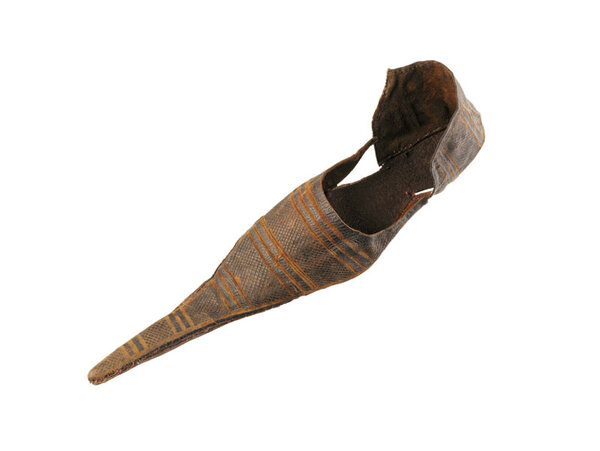 “What we found in the in the archaeological record mirrors very closely what we’re seeing in the clinical literature today,” Dr. Dittmar said. “Individuals, usually older adults, that have hallux valgus are much more likely to fall than are people of the same age who don’t have hallux valgus.”

Pointy shoes had been kicking around continental Europe since at least the 11th century, signifiers of idle luxury, their impracticality a middle toe to the concept of manual labor. At a time when garments ran long and even a glimpse of male ankle was deemed erotic, a long-toed shoe made a pronounced statement. In the early 12th century, Orderic Vitalis, a Norman monk, railed against wearers of “shoes like scorpions’ tails,” which he considered “a fashion typical of their corrupt morals.” (He also disliked that these men “grew long and luxurious locks like women” and wore “long, over-tight shirts and tunics.”)

One also could not easily kneel, or pray, in such shoes, which were sometimes known as “Satan’s claws.” In 1215, Pope Innocent III prohibited clergy members from wearing, among other things, “shoes with embroidery or pointed toes.” The edict was unsuccessful enough that Pope Urban V tried again in 1362.

Poulaines swept into England in the 14th century, ostensibly on the feet of Anne of Bohemia, the 16-year-old bride to the 15-year-old Richard II, but perhaps even slightly earlier. (Poulaines, a French term, refers to Poland; the shoes were also sometimes called crakows, after the Polish capital.) In Dr. Dittmar’s study, the bunions were more common on wealthy individuals, but they appeared even on skeletons from a charitable hospital. “It does seem that these types of shoes became fairly popular with everyone,” she said. Poulaines tapered off the scene sometime after 1465, when Edward IV banned from England any shoe with a toe more than two inches long.

It was neither the first nor last time that humans have forced their bodies to fit the vogue; foot-binding began in China in the 10th century and lasted a millennium, overtaking the Victorian corset. No doubt future paleopathologists, wiser and barefoot, will scoff at the many ways — earth shoes, cowboy boots, Air Jordans, brogues, Chukkas, Uggs — we’ve found to sell our soles to the devil.

“It certainly is something,” Dr. Dittmar said. During the pandemic lockdown, she wore her running sneakers to the lab, which she has largely to herself, and is not particularly looking forward to what comes next: “Every time you go to a conference and you put on your high heels, I think, This is so bad, why do we do this? But it’s fashion, isn’t it?”

A hoard of 1,200-year-old silver coins in Poland, possibly part of a ransom paid to Vikings who threatened to sack Paris.

A 6,000-year-old throwing dart, recovered from melting ice in northwest Canada, bearing traces of beaver castoreum, perhaps as a preservative, an adhesive or a colorant.

The Indigenous settlement of Sarabay, in Florida, which had been mentioned in French and Spanish documents from the 16th century.

After 22 years, Denise Grady, a reporter on the Health and Science desk and our beloved colleague, is retiring today from The Times. Celia Dugger, our desk editor, writes:

“Denise has pursued the truth without compromise, written with clarity about complicated science and treated the subjects of her stories with respect and kindness. Almost a decade ago, she wrote about Emma Whitehead, a charming girl with advanced leukemia who was the first child saved by an experimental cancer immunotherapy.

“She followed a team of American surgeons to Rwanda, where they only had the resources to operate on a small number of desperately sick young people who had rheumatic heart disease, caused by untreated strep infections that could have been cured with cheap antibiotics. And in this unprecedented pandemic year, Denise’s decades of experience have been indispensable in our coverage of the coronavirus and the chase for vaccines to combat it.

“Denise has been a mentor not just to up-and-coming reporters, but to her editors. She is allergic to hype of any kind. She has vetted the medical science of countless stories written by her colleagues across The Times. She also happens to have a wicked sense of humor. We will miss her company greatly.”