A fossilized creature stretching just one-inch has been deemed the oldest remains of a salamander to be discovered.

The ancient amphibian, called Triassurus sixtelae, lived in Russia approximately 230 million years ago and is 90 million years older than any other found in history.

The skeletal fossil was unearthed at the Madygen Romation in Krygzstan and includes shoulder bones, a mouth and some extremities.

Researchers have also found evidence that this salamander species lived both on land and in shallow water, and is ‘a missing link’ to the evolution of frogs. 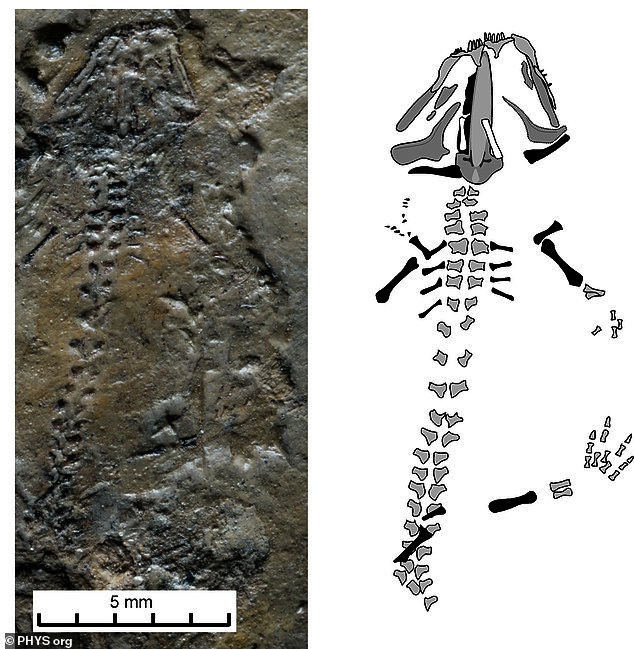 German researcher who uncovered the fossil shared their findings in the Proceedings of the National Academy of Sciences: ‘The gap between salamanders and other lissamphibians, as well as Paleozoic tetrapods, remains considerable.’

‘Here we report a new specimen of Triassurus sixtelae, a hitherto enigmatic tetrapod from the Middle/Late Triassic of Kyrgyzstan, which we identify as the geologically oldest stem-group salamander.’

‘This sheds light not only on the early evolution of the salamander body plan, but also on the origin of the group as a whole.’

The fossil dates back 230 million years ago and is now the oldest remains of a salamander to be uncovered in recorded history.

The creature, named Triassurus sixtelae (T. sixtelae), is about one-inch long and the fossil includes its shoulder bones, head and parts of its extremities. 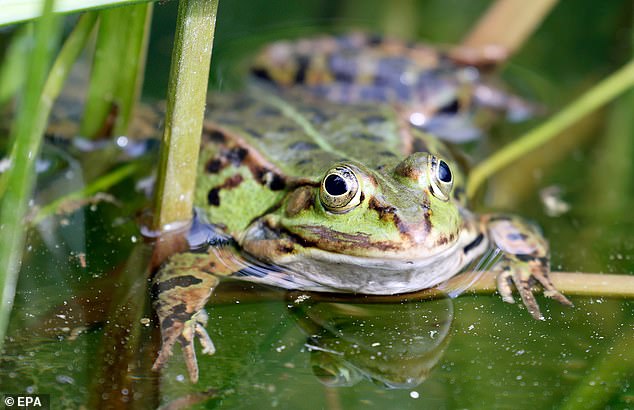 The team also found the fossil showed T. sixtelae had some differences from tetrapods that put it above temnospondyls on the evolutionary tree, in a group called batrachians, which includes salamanders and frogs in modern times

The team discovered the remains several years, but was incomplete until recently when they uncovered more of the fossil.

So far, the researchers are certain that the T. sixtelae was similar to many salamander species currently living in parts of Asia.

It would have lived on the foothills of the Krgyszstan and on both land and surrounding shallow waters.

The team also found the fossil showed T. sixtelae had some differences from tetrapods that put it above temnospondyls on the evolutionary tree, in a group called batrachians, which includes salamanders and frogs in modern times.

The researchers suggest the find represents a bridge between the very oldest known salamanders and those that are still alive today.

And the location of the find suggests that salamanders may have originated in Eurasia, and then dispersed widely from there, in some cases following land bridges that existed during the Triassic Period.