Netflix will now allow its users to remove films and television shows that are ‘clogging up’ the Continue Watching section of the homepage.

This is a long requested featured, allowing users to get rid of a list of half watched movies, TV shows they sampled but didn’t enjoy, and boring documentaries.

The new feature has already been made available across the Netflix web, mobile and TV apps, with users simply selecting the offending item in the Continue Watching section, then scrolling down to a new ‘Remove from Continue Watching’ button. 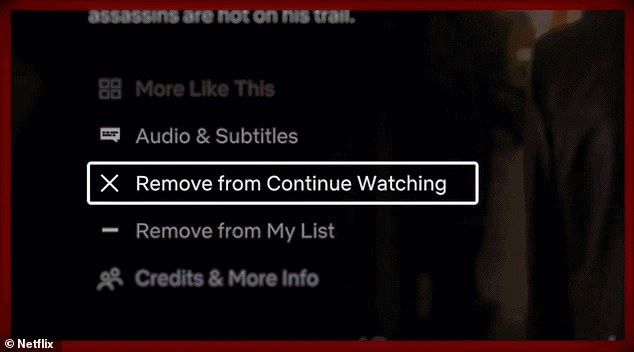 Netflix described the calls for this feature as being like ‘inbox zero’, which is where people attempt to have dealt with all the emails in their mailbox each day.

‘Inbox zero might be hard to achieve on email, but why can’t you bring that same enthusiasm to your ‘Continue Watching’ row,’ a spokesperson for Netflix said.

‘We heard you, and that’s why we’re introducing a new way for members to give your ‘Continue Watching’ row a fresh start.’

The firm says the feature will allow users to keep the row fresh, for new shows they are sampling or re-watching – making it easier to find what they want. 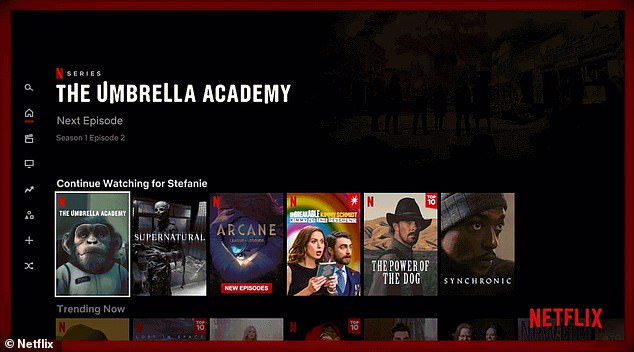 This is a long requested featured, allowing users to get rid of a list of half watched movies, TV shows they sampled but didn’t enjoy, and boring documentaries

HOW TO REMOVE ITEMS FROM NETFLIX ‘CONTINUE WATCHING’

A common complaint aimed at Netflix was the inability to remove shows fro the Continue Watching section of the website.

This is an area that shows viewers episodes of shows, or movies they have clicked on recently – or someone else using their profile has clicked on.

There have been numerous calls for the ability to remove an item from this list, in part to ‘clean it up’ and potentially to hide embarrassing viewing habits.

You can remove TV shows or movies from the Continue Watching row when watching on computers, TVs and mobile devices with the Netflix app.

It isn’t the largest change to the Netflix user interface, but it is an important feature, that is a central way users find what they are watching.

Continue Watching is among the first things you see when you open Netflix, whether it be on a mobile device, TV or in a web browser on a computer.

This is why Netflix worked to add this new remove feature, giving its users a ‘little more control’ over how they use the service.

‘Whether you’re deleting a new pick you’re not feeling, an old favorite you’ve rewatched too many times or Marie Kondo-ing your whole row, this new button lets you constantly keep your ‘Continue Watching’ row fresh and filled with the shows and movies you can’t wait to watch,’ Netflix wrote in a blog post.

‘We are always working to improve the Netflix experience so our service is quick and easy to use. How will you tidy up your ‘Continue Watching’ row?’

In a blog post writing about the feature, Netflix linked to a tweet by user @RAC2040, saying ‘we heard you’.

In the tweet the user asks for a ‘remove from’ option, to remove suggestions from various lists, not just the Continue Watching section.

The user suggested having the ability to remove items already watched, or that they have no intention of watching, would improve the Netflix algorithm. This would allow them to better tailor the suggested videos to the individual user.

In response to the news from Netflix, @RAC2040 wrote: ‘It’s a good start, but it needs rolling out to other rows. e.g. on my Action-Sci Fi, I’ve seen the 1st 9 suggestions.

‘It’d be great to be able to remove those, so alt content can be suggested. Amazon have a “Hide” function that basically serves that purpose.

‘It’s frustrating to be constantly suggested content across the rows that you’ve already seen, so it gives the false impression of a lack of new content.’ 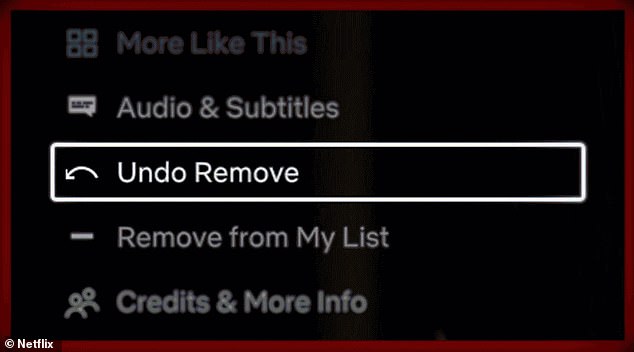 The news comes just two weeks after Netflix raised its monthly subscription price by $1 to $2 per month in the United States depending on the plan, to help pay for new programming to compete in the crowded online streaming market.

The standard plan, which allows for two simultaneous streams per account, now costs $15.49 per month, up from $13.99, in the United States.

The US price of Netflix’s premium plan, which enables four streams at a time and streaming in ultra HD, was increased by $2 to $19.99 per month.