Neolithic fisherman who died 5,000 years ago, and was found in a mass grave in Northern Chile ‘drowned in saltwater’, a new advanced forensic test revealed

A neolithic fisherman who died 5,000 years ago, and had been buried in a mass grave in Northern Chile, ‘drowned in saltwater’, a new advanced forensic test found.

Researchers from Southampton University in England used a modern forensics technique, used to determine the cause of death, on the ancient remains.

They confirmed saltwater drowning as the cause of death for the fisherman, closing a 5,000-year-old cold case, and opening up new possibilities for assessing the remains of our prehistoric ancestors using modern techniques.

The technique tests for diatoms, a group of algae found in oceans, freshwater and soils, inside the bones of victims.

Finding them suggests the person drowned. This is because if they had died before entering the water, they would not have swallowed any saltwater.

The team hope it will help archaeologists understand more about past civilisations in coastal regions, and the human stories behind the remains they discover. 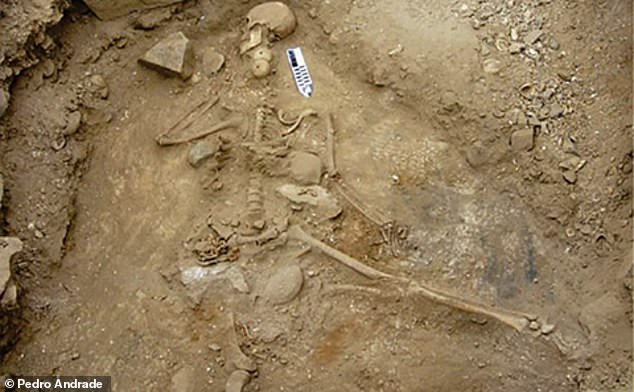 This is the first time diatom tests have been used to determine drowning in saltwater on prehistoric human remains, the team explained.

As well as those tests, the researchers carried out a range of microscopic analysis of the bone marrow they expected from the 5,000-year-old remains.

This allowed them to search for a greater range of microscopic particles that could provide more insight into the cause of his death.

Through the more detailed study, they found a variety of different marine particles, including fossilised algae, parasite eggs and sediment, which would not have been detected by the standard diatom test.

Professor James Goff, who led the study said: ‘mass burials have often been necessary after natural disasters such as tsunamis, floods or large storms.

‘However we know very little about whether prehistoric mass burial sites near coastlines could be the result of natural disasters or other causes such as war, famine and disease. 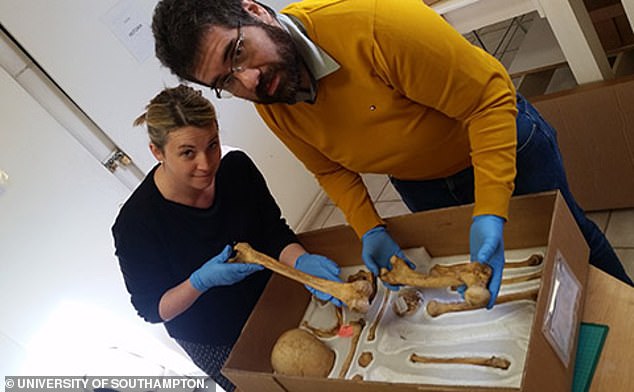 Genevieve Cain, Prof Pedro Andrade and the fisherman. Researchers from Southampton University in England used a modern forensics technique, used to determine the cause of death, on the ancient remains

Researchers applied modern techniques used to determine the cause of death in forensic science, to study a 5,000-year-old skeleton.

They found the fisherman, between the age of 35 and 45, died in a fishing accident, drowning in salt water.

Skeletal remains of a 5,000 year old fisherman in a coastal mass burial.

‘This gave us our light bulb moment of developing an enhanced version of a modern forensic test to use on ancient bones.’

At the start of the study, Prof Goff and Professor Pedro Andrade of the Universidad de Concepción in Chile, looked through archaeological papers for records of mass burial sites near coastlines.

Prof Andrade had previously studied an archaeological site known as Copaca 1, which is 18 miles south of Tocopilla on the Chilean coastline, containing a grave with three well preserved skeletons.

They selected this site, and the individual they studied out of the three was a male hunter-gather aged between 35 and 45.

The condition of his bones suggested he was a fisherman as there were signs of frequent harpooning, rowing and harvesting of shellfish.

This made him the ideal candidate to study for signs of drowning and for evidence of the event that led to his death.

‘By looking at what we found in his bone marrow, we know that he drowned in shallow saltwater,’ Prof Goff said.

‘We could see that the man swallowed sediment in his final moments and sediment does not tend to float around in sufficient concentrations in deeper waters.’

The team believe that the man died in a simple maritime accident, rather than a major catastrophic event, such as a tsunami or mass flood, due to the fact the bones of the other people in the grave didn’t contain marine particles.

The team said that if they tested other human remains on the site, outside of these three, as well as look for geological evidence of natural disasters in the area, they’d be able to shed more light on his cause of death. 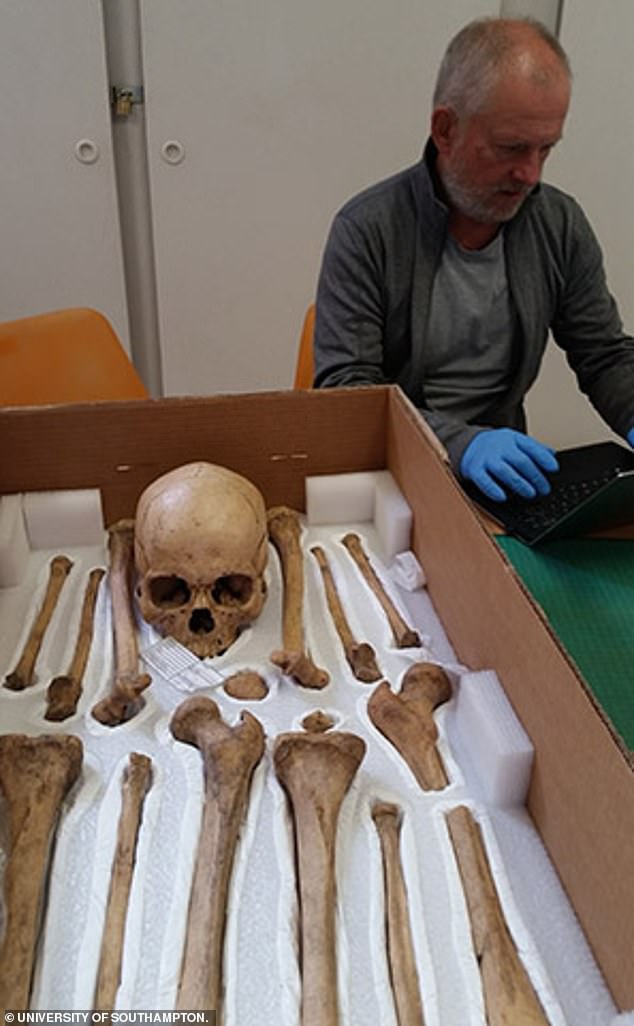 Prof James Goff and the fisherman. They confirmed saltwater drowning as the cause of death for the fisherman, closing a 5,000-year-old cold case, and opening up new possibilities for assessing the remains of our prehistoric ancestors using modern techniques

Most importantly, the scientist believe this new technique can be used for ancient mass burial sites around the world to get a richer picture of the lives of people in coastal communities throughout history.

‘In taking more time over the forensic technique and testing for a broader range of beasties inside the prehistoric bones, we’ve cracked open a whole new way to do things,’ Prof Goff explained.

‘This can help us understand much more about how tough it was living by the coast in pre-historic days – and how people there were affected by catastrophic events, just as we are today.’

‘There are many coastal mass burial sites around the world where excellent archaeological studies have been carried out but the fundamental question of what caused so many deaths has not been addressed. Now we can take this new technique out around the world and potentially re-write prehistory.’

The findings were published in the Journal of Archaeological Science.