Nearly half a MILLION newborn babies around the world died from air pollution in 2019, report finds

Air pollution led to the death of nearly half a million newborn babies across the globe last year, the ‘State of Global Air 2020’ report has found.

Two-thirds of the deaths of young infants appear associated with the use of solid fuels — such as wood, charcoal and animal dung — for cooking.

Overall, household and outdoor air pollution contributed to more than 6.7 million deaths worldwide in 2019 via such conditions as diabetes, stroke and lung diseases.

This makes air pollution one of the highest causes of death among health risks, experts said, behind such factors as poor diets and smoking.

The study reported that the most polluted regions — which include South Asia and Africa — have seen little progress in lowering particulate levels in the last decade.

Areas with high levels of air pollution could also contribute to the severity of COVID-19 cases during the present global pandemic, experts have warned. 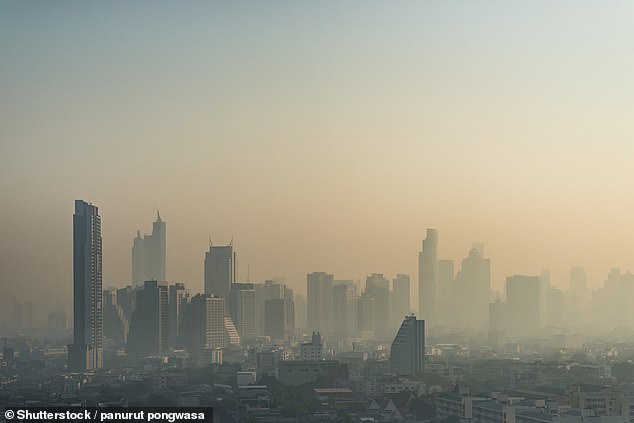 Air pollution led to the death of nearly half a million newborn babies across the globe last year, the ‘State of Global Air 2020’ report has found. Pictured, pollution over Bangkok city, Thailand

The State of Global Air 2020 report found that:

‘An infant’s health is critical to the future of every society and this newest evidence suggests an especially high risk for infants born in South Asia and sub-Saharan Africa,’ said Health Effects Institute president Dan Greenbaum.

‘Although there has been slow and steady reduction in household reliance on poor-quality fuels, the air pollution from these fuels continues to be a key factor in the deaths of these youngest infants.’

Despite a reduction of 11 per cent over the last decade, some 3.8 billion people are still exposed to household air pollution from cooking each year.

According to the researchers, 20 per cent of infant deaths in the first month after birth are attributable to both ambient and household air pollution.

The findings in the report were based on the recent Global Burden of Disease analysis published in the medical journal The Lancet, which evaluates the impact of 286 causes of death and 369 diseases across 204 countries.

Public health expert Christopher Murray of the University of Washington — who led the Global Burden of Disease research — has warned of the increased risk arising from the interplay of air pollution and the coronavirus pandemic.

‘The interaction of COVID-19 with the continued global rise in chronic illness and related risk factors — including obesity, high blood sugar and outdoor air pollution — […] has created a perfect storm, fuelling COVID-19 deaths,’ he said.

While the full links between the novel coronavirus and air pollution are not clear, air pollution is known to lead to a rise in the incidence of heart and lung disease — two conditions which make individuals more susceptible to severe cases of COVID-19.

Experts are particularly concerned that the high levels of pollution seen across much of East and South Asia could serve to exacerbate the impact of SARS-CoV-2.

While China has made progress in beginning to lower its air pollution levels, elsewhere in Asia — such as in Bangladesh, India, Nepal and Pakistan — ambient levels continue to be high.

China and India alone saw more than half of the global deaths attributable to air pollution — of some 2.3 million people — last year, the report concluded.

‘As countries plan for the post-COVID recovery, it is crucial that air pollution is considered as an important pillar in policymaking.’ 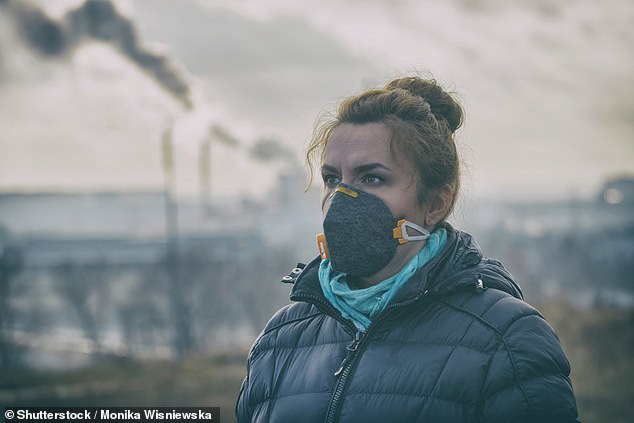 Public health expert Christopher Murray of the University of Washington — who led the Global Burden of Disease research — has warned of the increased risk arising from the interplay of air pollution and the coronavirus pandemic Pictured, a women wears a facemask in the smog

‘I think it is so important that the Global Burden of Disease project is addressing air pollution and low birthweight/preterm birth,’ said neonatologist Susan Niermeyer of the University of Colorado, who was not involved in the present study.

‘It hasn’t been brought into focus for health professionals and policy makers in a meaningful way,’ she added.

The full findings of the report were published on the State of Global Air website.