NASA’s Orion capsule captured a stunning ‘blue marble’ image of the Earth nine hours into its epic journey to the moon – marking the first time a human-rated craft has seen this view since the last moon mission nearly 50 years ago during the 1972 Apollo mission.

The image shows the round planet we call home filled with swirling white clouds and blue oceans surrounded blackness of space, along with parts of the orbital maneuver system and solar array wing attached to Orion.

The capsule was nearly 200,000 miles away from the moon when it snapped the historic selfie, but is expected to reach Earth’s natural satellite around November 22, when it will come within 60 miles during a flyby towards its final orbit.

Orion launched aboard the world’s most powerful rocket, the Space Launch System (SLS), just before 2:00 am ET from Kennedy Space Center in Florida, and is the first stage of putting human boots back on the moon. 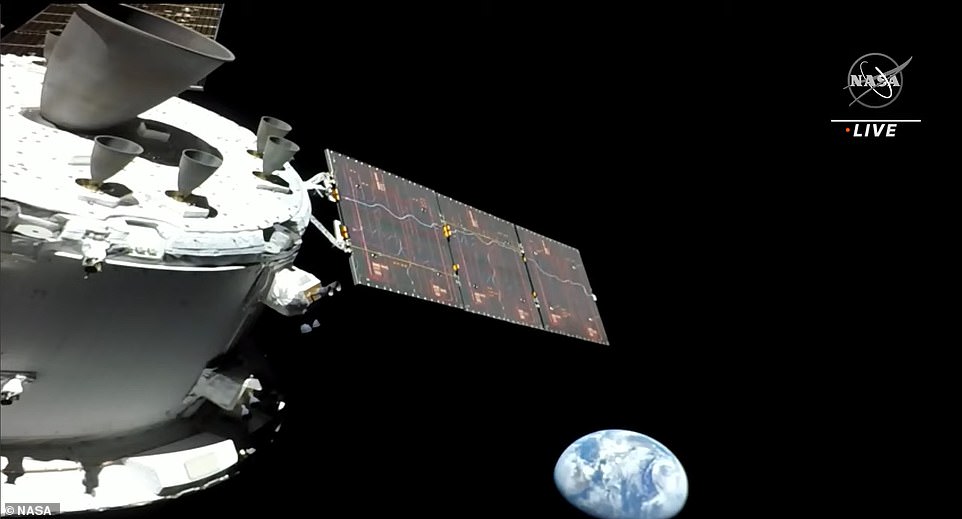 NASA’s Orion crew capsule snapped its first image of Earth as it ventures to the moon. This is the first time since 1972 that a human-rated craft has captured a view of our planet 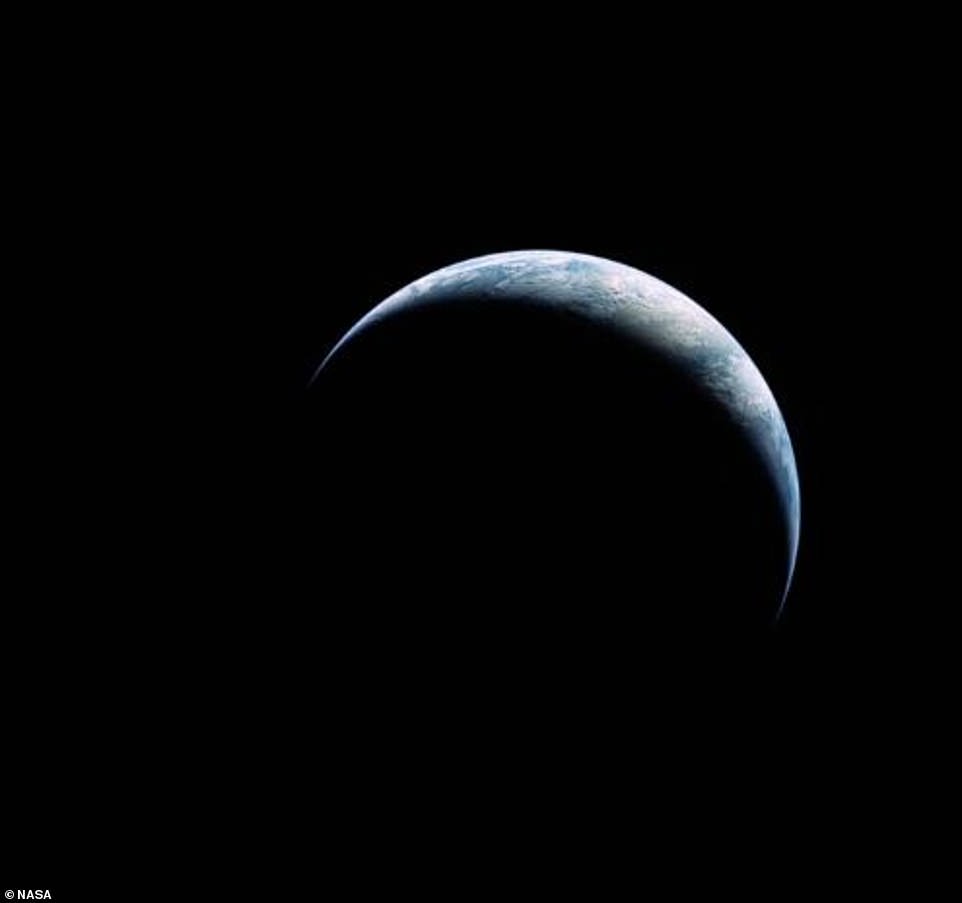 Although Orion is an uncrewed test flight, three mannequins are riding inside the craft – one of which is donning an Orion crew survival suit that is being tested in space to ensure its safety for human astronauts.

The orange was chosen in the event astronauts have to dive into the ocean from the capsule – the color is bright enough for rescue teams to see.

Astronauts will also receive touch screen gloves to use the displays inside the capsule and the suits are also flame retardant.

The mannequin – or moonikin – was named Campos in honor of Arturo Campos, who was an American electrical engineer at NASA and a key player in bringing the failed Apollo 13 mission home. 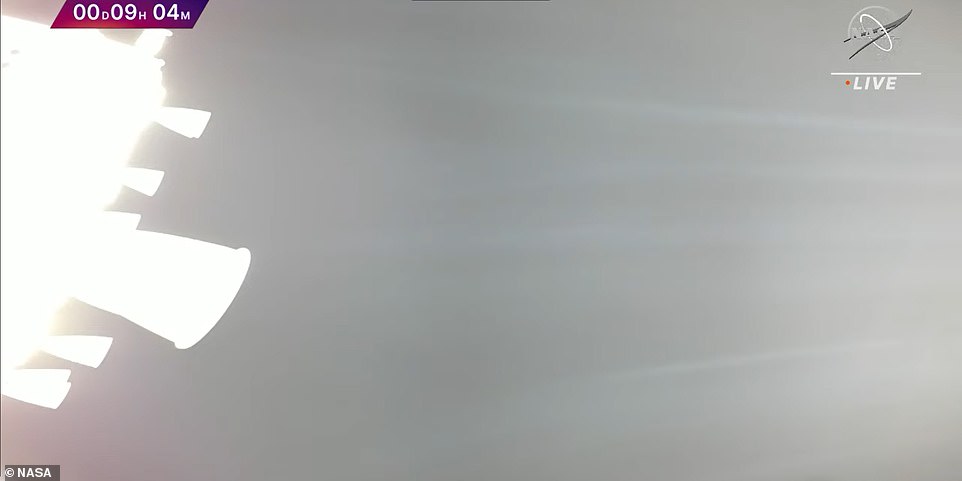 NASA hosted a live briefing at 10:45 am ET, anticipating the images of Earth to be released, but also showed the first image of Orion in space just a little more than nine hours since launch 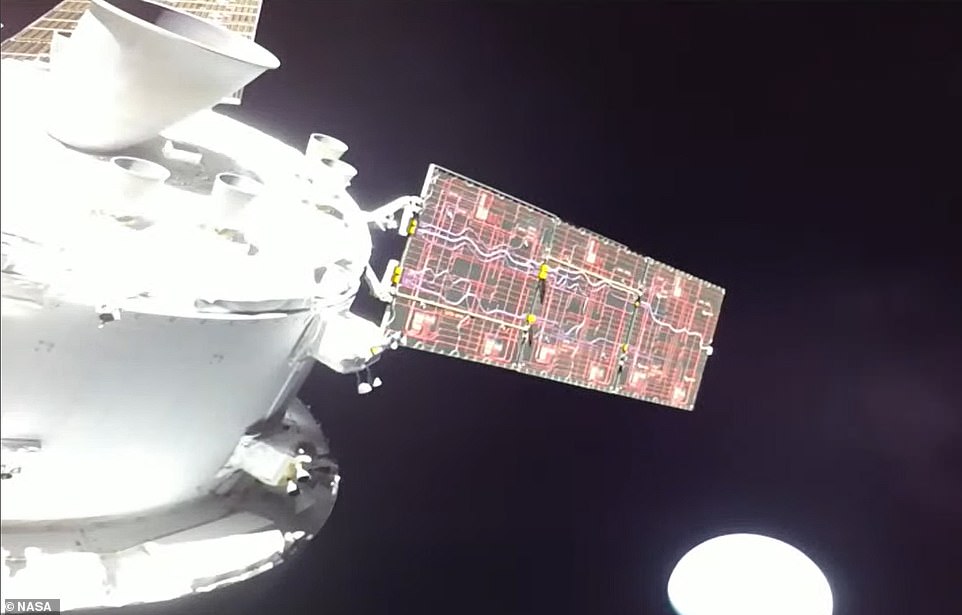 NASA shared the livestream as the Earth was coming into view, but also showing the orbital maneuver system and solar array wing attached to Orion. Earth is still out of focus, appearing as a glowing orb in space 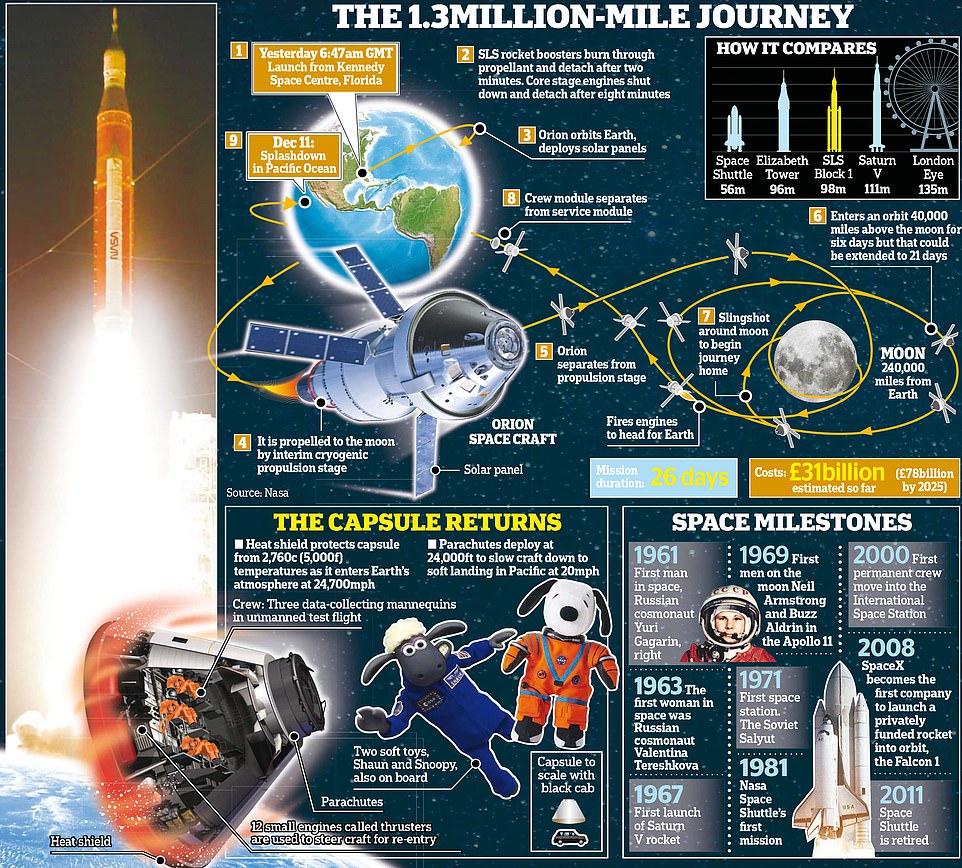 NASA’s most powerful rocket finally launched. This is the first phase needed to put human boots back on the moon

NASA also shared a look inside the craft, showing a small window to the right that will be used by the first woman and person of color that will eventually land on the moon.

This is a historic launch that signals the first stage of the US space agency’s goal to return people to the lunar surface for the first time in half a century.

If successful, the mission will be followed by a human trip around the moon in 2024 and could lead to the first woman and first person of color following in Neil Armstrong’s footsteps the year after.

The stumbling block to this has been the numerous delays NASA’s new mega moon rocket has faced, with its maiden launch date repeatedly pushed back since August.

However, after enduring fuel leak concerns, engine issues and escaping the clutches of not one but two hurricanes, the $4 billion SLS finally blasted into orbit.

And NASA’s efforts have paid off, as it is getting the first epic images of the journey.

There are 24 cameras in total on both SLS and Orion, four on the capsule that captured the epic selfie of the capsule with Earth – and these will also capture images of the moon. 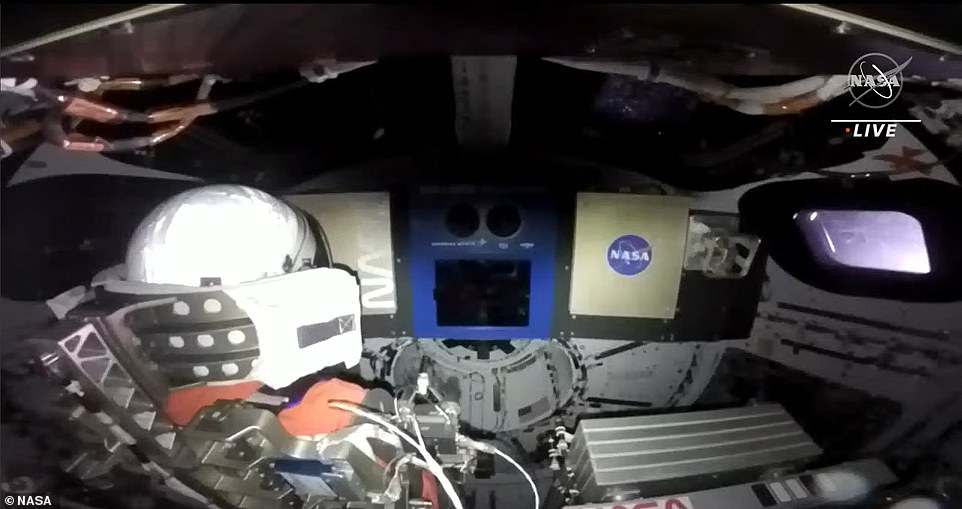 NASA shared a look inside Orion, showing a small window to the right that will be used by the first woman and person of color that will eventually land on the moon. Seated to the left is a mannequin donning an Orion crew survival suit that is being tested in space for the first time

The four cameras on SLS sit on its engine and are pointing up toward Orion.

The rocket also has two cameras at the intertank by the top of boosters that captured booster separation and two cameras on the launch vehicle stage adapter, that snapped core stage separation.

The eight cameras cycled through a preprogrammed sequence during launch and ascent.

On Orion, an external camera mounted on the crew module adapter will show the SLS rocket’s ascent, providing the ‘rocket cam’ view the public often sees during launches.

Four cameras attached to the spacecraft’s solar array wings on the service module will help engineers assess the overall health of the outside of Orion.

David Melendrez, imagery integration lead for the Orion Program at NASA’s Johnson Space Center in Houston, said in a statement: ‘A lot of folks have an impression of Earthrise based on the classic Apollo 8 shot.

‘Images captured during the mission will be different than what humanity saw during Apollo missions, but capturing milestone events such as Earthrise, Orion’s farthest distance from Earth, and lunar flyby will be a high priority.’ 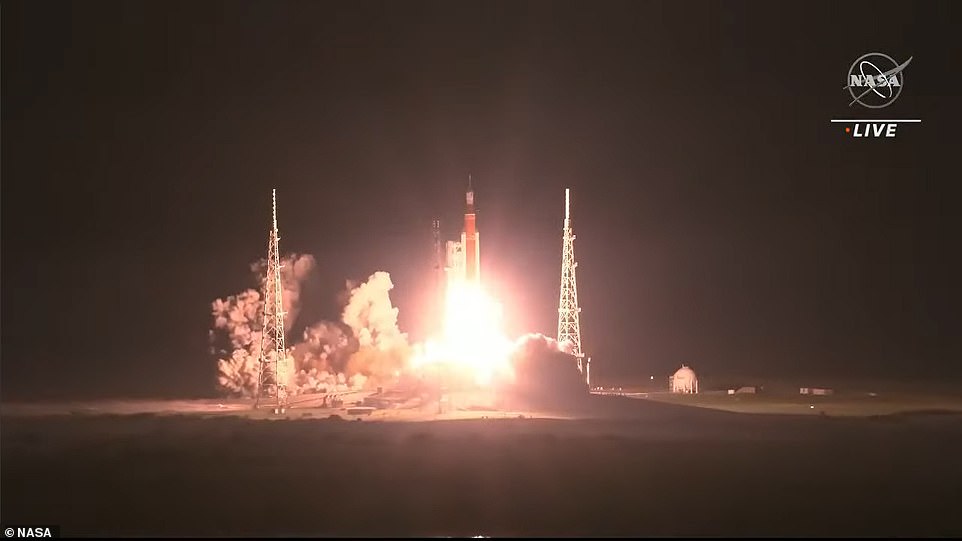 If successful, the mission will be followed by a human trip around the moon in 2024 and could lead to the first woman and first person of color following in Neil Armstrong’s footsteps the year after

Despite its ultimate success, this launch was not without drama, as in the final few hours before lift-off, a ‘red team’ of engineers was sent out to the launch pad to tighten some bolts and stop a fuel leak.

However, at 01:47 EST (06:47 GMT), the rocket’s four main R-25 engines and two boosters exploded into life, pushing the 32-storey rocket into the sky over Florida with 8.8 million pounds of thrust.

‘We rise together, back to the moon and beyond,’ said NASA’s official commentator as the rocket took off.

About ten minutes later, the engines of the SLS rocket powered off and the core stage separated, as Artemis entered the Earth’s orbit.

Then, at 3:42 am , NASA announced that Orion had completed its 20-minute ‘trans-lunar injection maneuver’ that accelerated it to more than 22,600 mph and propelled it towards the moon.

Artemis’ launch director Charlie Blackwell-Thompson told her cheering colleagues: ‘You are part of a first – it doesn’t come along very often, once in a career, maybe.

‘We are all part of something incredibly special: the first launch of Artemis. The first step in returning our country to the moon and on to Mars. What you have done today will inspire generations to come.’

Blackwell-Thompson added in a statement: ‘On behalf of all the men and women across our great nation who have worked to bring this hardware together to make this day possible, and for the Artemis generation, this is for you.’