‘Perseverance got us to Mars. With Ingenuity, we soar higher’: NASA’s Mars helicopter successfully flies on the Red Planet marking the first time a powered flight has been completed on another planet

NASA’s Ingenuity Mars helicopter has become the first craft to complete a powered flight on another world, according to NASA, after waiting three hours for the data to travel the 180 million miles from the Red Planet.

Taking off earlier this morning, Ingenuity flew for just under 40 seconds, travelling up 10ft into the Martian air before landing successfully on the surface.

The space agency had originally planned the flight for April 11 but postponed it over a software issue that was identified during a planned high-speed test of the aircraft’s rotors. The issue was soon resolved.

NASA JPL tweeted after the data successfully came in, confirming the helicopter took off, hovered above the surface and landed: ‘Perseverance got us to Mars. With Ingenuity, we soar higher.’

‘The #MarsHelicopter made history today by being the first craft to achieve controlled, powered flight on a planet beyond Earth.’

The first image to come back from Ingenuity on Mars showed the shadow of the helicopter on the surface of the planet in black and white. It was taken by the navigation camera mounted under the 4lb rotorcraft.

MiMi Aung from the Ingenuity team described the flight as the ‘Wright Brothers moment,’ in reference to the first powered flight on Earth, achieved by the Wilbur and Orville Wright in 1903 in Kitty Hawk, North Carolina.

She said ‘we know from history Wilbur and Orville got straight back to work,’ adding we ‘must take a moment to celebrate this moment but after that ‘lets get back to work with more flights.’ 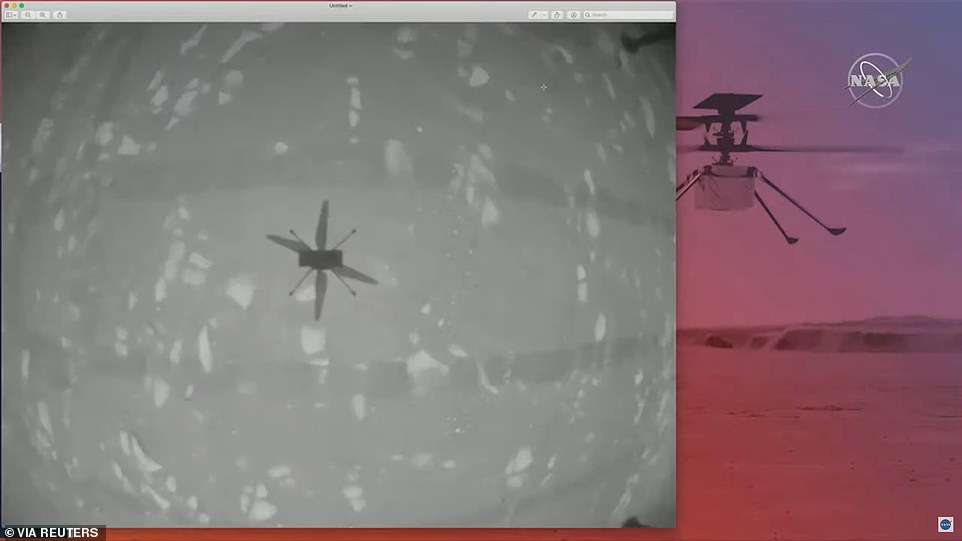 The first image to come back from Ingenuity on Mars showed the shadow of the helicopter on the surface of the planet in black and white. It was taken by the navigation camera mounted under the 4lb rotorcraft 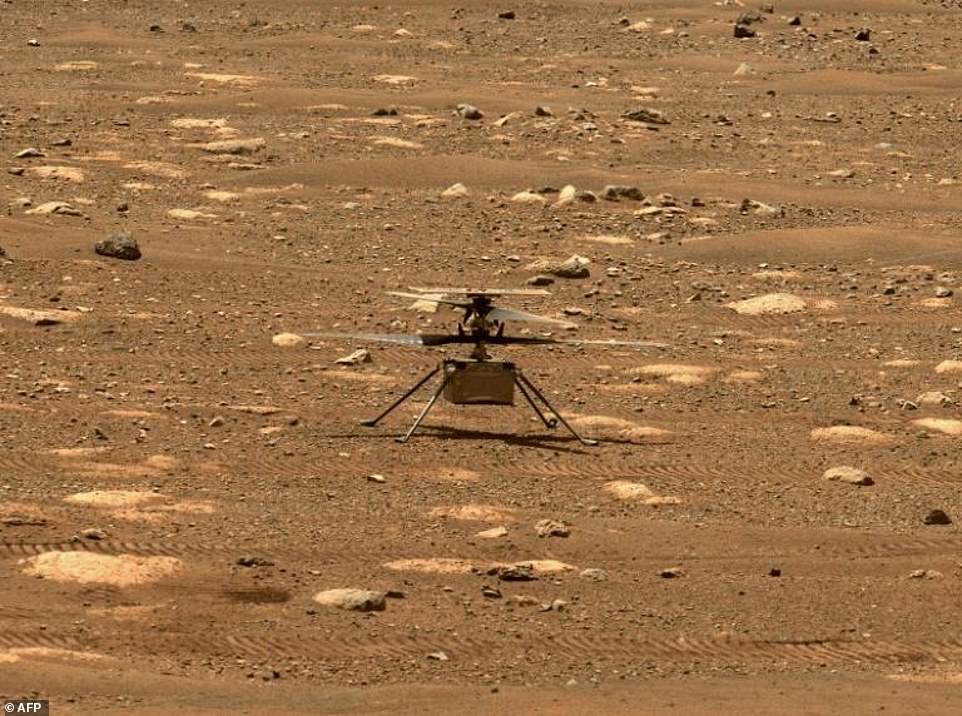 Ingenuity as seen on Mars on April 7, 2021 in a photo taken by the rover Perseverance. If the 08:30 BST flight is a success then it will become the first powered, controlled flight to take off and land on another planet, giving NASA their own ‘Wright Brothers moment’ 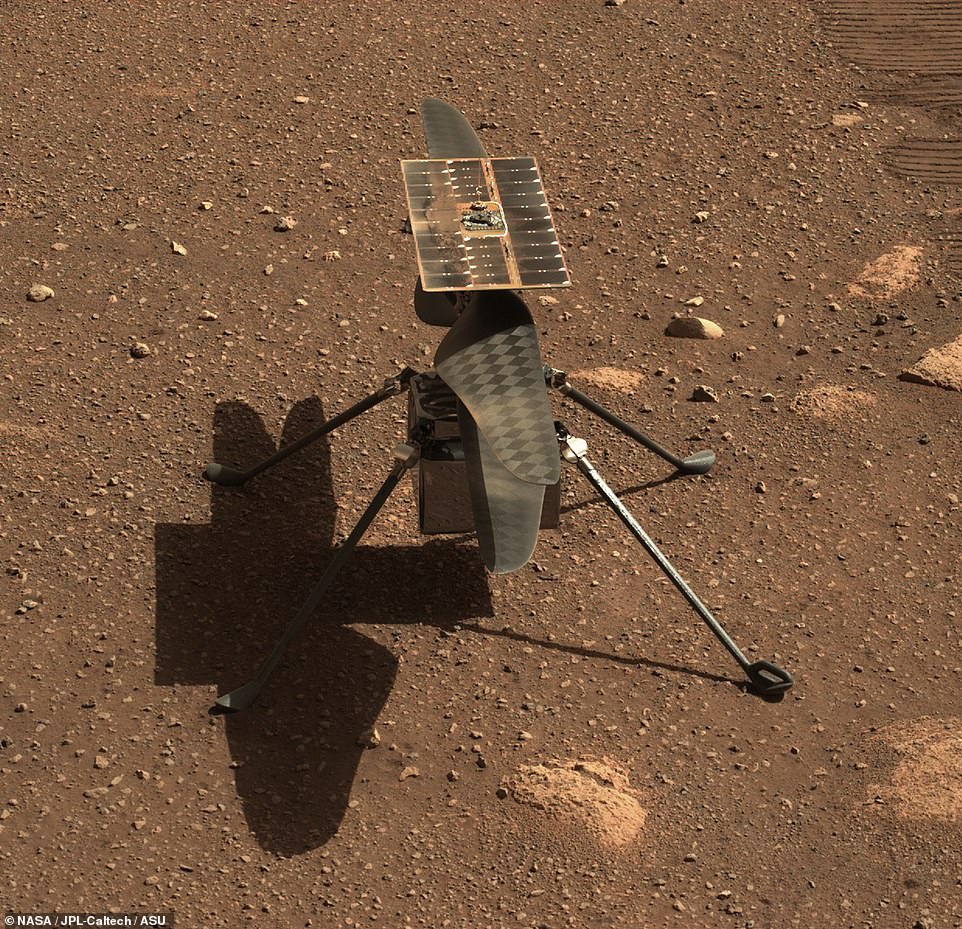 The issue has since been resolved after engineers uploaded an update to the four-pound (1.8 kilograms) drone that required it to be powered off and started up again while on the frozen Martian surface

NASA is set to fly where no one has flown before – Mars’ atmosphere.

Named Ingenuity, the craft will fly at an altitude that is similar to 100,000 feet on Earth, allowing it to gather geology data in areas the rover can’t reach.

NASA is comparing this mission ‘to the Wright brothers moment,’ as it will be the first time in history an aerial vehicle has flown on another world.

It will first spend up to 60 days charging strapped to the Perseverance rover, before being released.

If it survives the hard -90C Martian night, NASA will make the first flight attempt within 30 days.

‘Since the Wright brothers first took to the skies of Kill Devil Hills, North Carolina, December 17, 1903, first flights have been important milestones in the life of any vehicle designed for air travel,’ NASA said in a statement

Getting data back to Earth from Mars relies on a number of different pieces of technology, including the Perseverance rover and orbiting satellites know as the NASA Deep Space Network.

This first flight was a ‘very basic one’ designed to send it up for 40 seconds, take a couple of photos and land.

It was completely autonomous with flight signals sent from Earth which triggered a series of pre-programmed commands.

Ingenuity itself will analyse its position with respect to the Martian surface and all of that data is sent to Earth.

After the flight, Ingenuity sent Perseverance technical data on what it has done, and that information was transmitted back to Earth.

‘One of the great things about this helicopter is that it has a very powerful processor giving us a lot of data, it is 100 times as powerful as the one on the rover.

‘As the data begins to arrive from the data centre on Earth it will include a vast amount of information on how the flight went in stages, which will be used to verify if it was a success,’ explained Tim Cannon, Ingenuity Operations Lead.

The helicopter traveled to Mars attached to the underside of the rover Perseverance, which touched down on the planet on February 18 on a mission to search for signs of extraterrestrial life.

Information on the survival of the small helicopter, which is 19 inches tall but with 4ft blades took nearly four hours to return to Earth after the 08:30 BST flight on the Red Planet – due to the time to get data 180 million miles, as well as the 14 minute light time delay between Earth and Mars, according to NASA. 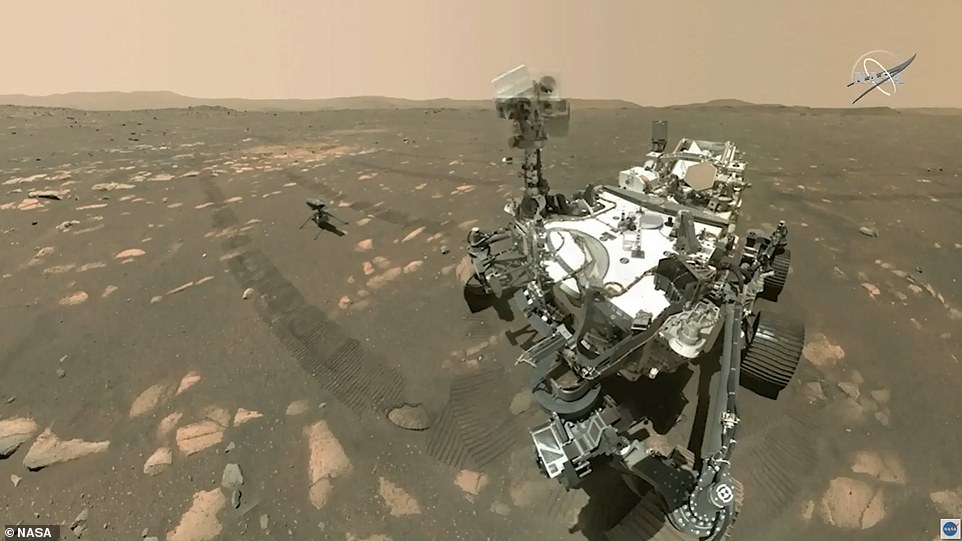 The flight will be autonomous, pre-programmed into the aircraft because of the 15 minutes it takes for signals to travel from Earth to Mars

The goal of the Ingenuity mission is to prove a flying vehicle can operate on Mars. I won’t contribute to the wider science mission this time, but if a success will be a base for future science missions on other worlds.

Ingenuity will pave the way for future flyers that will dramatically change our exploration of celestial bodies because they can reach areas that rovers can’t go, and travel much faster.

Bailey said ‘sending an aerial vehicle is really important as it elevates the next stage of space exploration and opens up new science as it can go to areas the rover can’t.’

Ingenuity won’t share any science this trip, but will be sending back images taken during its flight on Mars.

This will include a black and white photo of the Martian surface that Ingenuity is programmed to snap while flying, and once the batteries have charged later int he day, a colour photo of the horizon will be sent to Earth.

The most spectacular images are expected to come from the rover Perseverance, which will film the flight from a few feet away. Perseverance will also relay data to Earth from Ingenuity on its flight operations.

Shortly after filming, six videos of 2.5 seconds each will be sent to Earth. NASA hopes at least one of them will show the helicopter in flight. The entire video will be sent over the following few days.

NASA Jet Propulsion Laboratory, responsible for the mission, announced the flight by tweeting ‘Mars Helicopter, you are cleared for takeoff. Flight commands are being sent.’

This prompted Arnold Schwarzenegger to pull out one of his many famous movie lines, this time from Predator, telling NASA to ‘Get to the Chopper’!

‘This is fantastic, you are all celebrating having the first helicopter take off on Mars, I can’t wait to see what the footage looks like,’ Schwarzenegger said.

NASA JPL has science tweeted that the helicopter is ‘all spun up’ ready for the live stream showing the results of the flight coming back from the Red Planet to the Earth at about 11:30 BST. 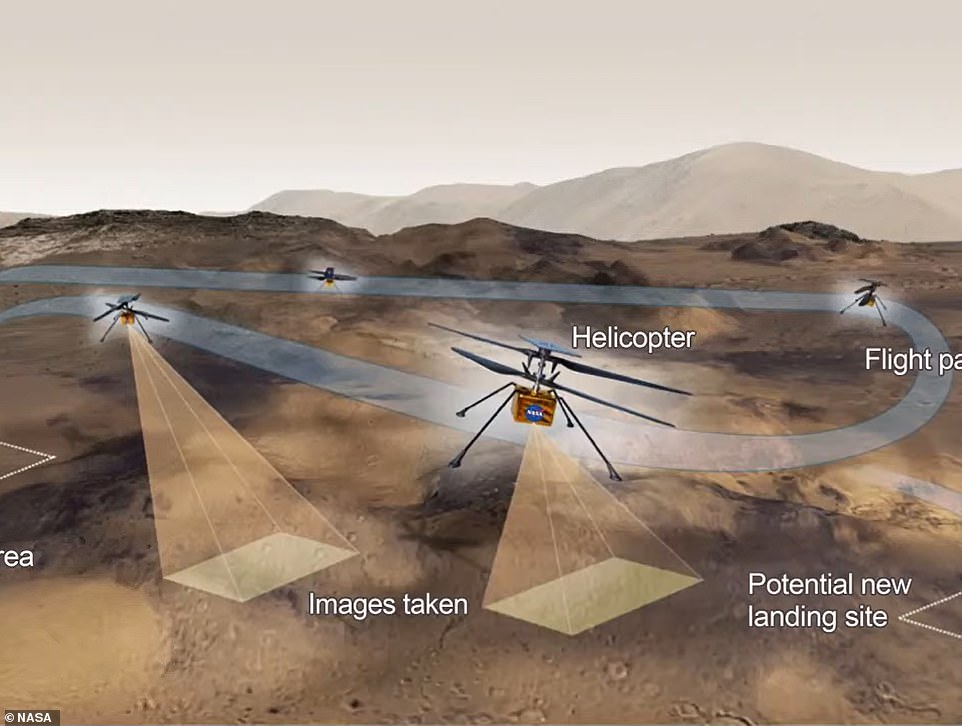 Ingenuity’s trip, which is to be the first-ever powered, controlled flight on another planet, is set for Monday April 19 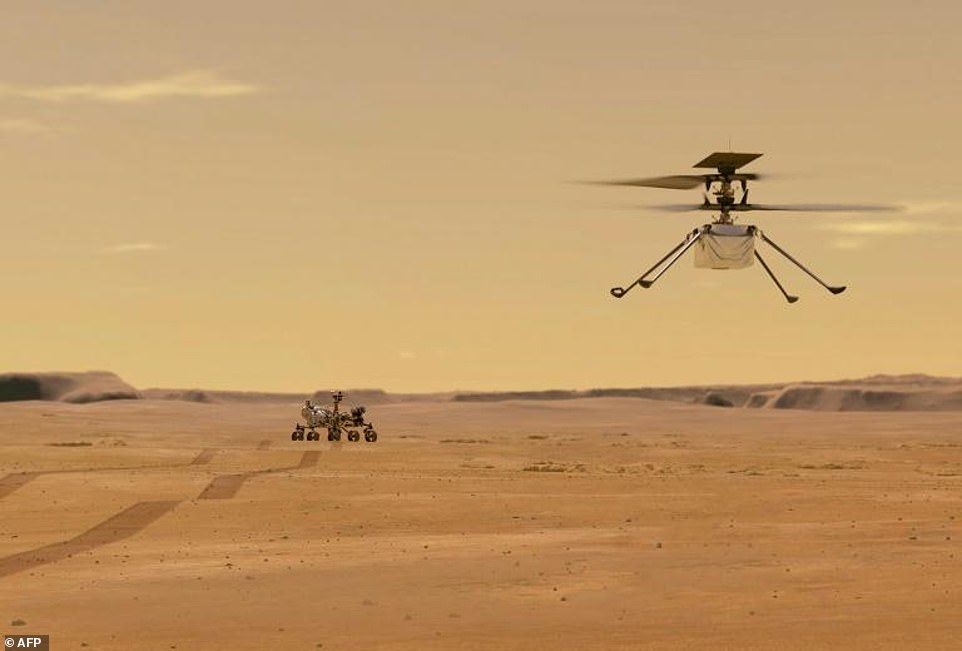 A NASA illustration of the small helicopter Ingenuity, which will attempt the first-ever powered flight on another planet

‘There will be surprises, and you will be learning about them right at the same time that we will. So let’s all get the popcorn,’ said Elsa Jensen, who oversees the cameras on the rover.

If the flight is a success, NASA plans another no more than four days later. It plans as many as five altogether, each successively more difficult, over the course of a month.

NASA hopes to make the helicopter rise five meters (16 feet) and then move laterally. Ingenuity’s ‘lifetime will be determined by how well it lands’ each time, said Aung – meaning whether it crashes.

‘Once we get to the fourth and fifth flight, we’ll have fun,’ she said. ‘We are going to take very bold flights and take high risk.’ 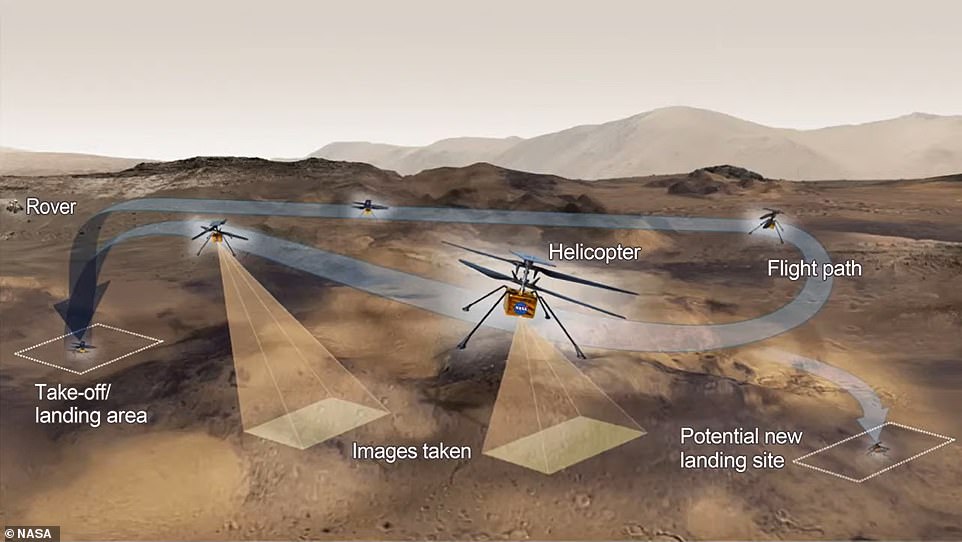 The issue has since been resolved after engineers uploaded an update to the four-pound (1.8 kilograms) drone that required it to be powered off and started up again while on the frozen Martian surface

NASA’s Mars 2020 mission will search for signs of ancient life on on the Red Planet in a bid to help scientists better understand how life evolved on Earth.

Named Perseverance, the main car-sized rover will explore an ancient river delta within the Jezero Crater, which was once filled with a 1,600ft deep lake.