NASA’s next generation lunar backpack could give astronauts the ability to create a 3D map of the surface of the moon, as they walk across the regolith.

The Kinematic Navigation and Cartography Knapsack (KNaCK) is a mobile lidar scanner, worn as a backpack that uses light and lasers to measure range.

NASA researchers and industry partners developed the device that can not only aid astronauts in the airless wastelands of the Lunar South Pole, but also on the Earth.

One suggested use is for a mountaineering expedition in an unchartered environment. The hikers can create a real-time map for others in the party, as well as other hikers that might come after them – all from a simple backpack.

Using KNaCK during rover excursions on the moon, as well as when traveling on foot, astronauts could precisely map the topography of the landscape, including deep ravines, mountains, and caves. They can even tag important sites for follow-up.

The first woman and first person of color will land on the moon in 2025, as part of the NASA Artemis program, that will eventually land humans on the surface of Mars. 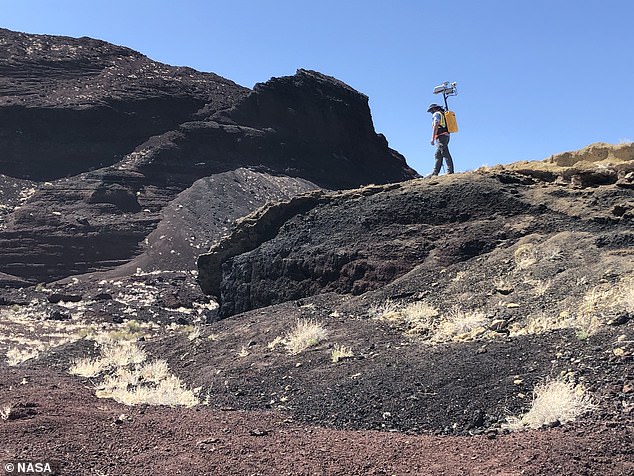 NASA’s next generation lunar backpack could give astronauts the ability to create a 3D map of the surface of the moon, as they walk across the regolith

Donned like a hiker’s backpack, KNaCK makes use of an innovative type of lidar called frequency modulated continuous wave (FMCW) lidar in order to provide Doppler velocity and range for millions of measurement points per second.

These measurement points instantly create a real-time navigation system, delivering to the explorer a 3D ‘point cloud’ or high-resolution map of the surrounding terrain.

It is like a super powered version of laser range finders that are used by surveyors, or a highly sensitive proximity alarm that lets smart cars avoid collisions.

Planetary scientist Dr Michael Zanetti, who leads the KNaCK project, said the sensor is a surveying tool for navigation and science mapping over unusual terrains.

‘[It is] able to create ultra-high-resolution 3D maps at centimeter-level precision and give them a rich scientific context,’ Zanetti said.

‘It also will help ensure the safety of astronauts and rover vehicles in a GPS-denied environment such as the Moon, identifying actual distances to far-off landmarks and showing explorers in real time how far they’ve come and how far is left to go to reach their destination.’ 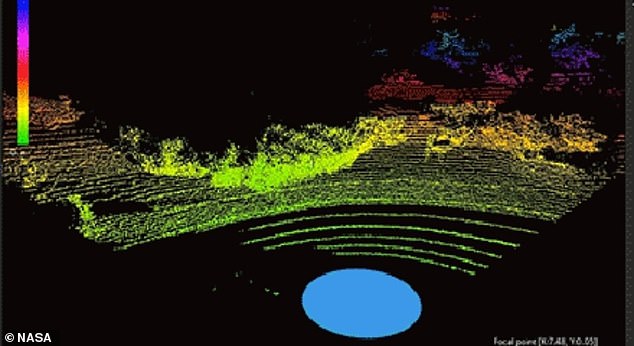 The Kinematic Navigation and Cartography Knapsack (KNaCK) is a mobile lidar scanner, worn as a backpack that uses light and lasers to measure range

LiDAR (light detection and ranging) is a remote sensing technology that measures distance by shooting a laser at a target and analysing the light that is reflected back.

The technology was developed in the early 1960s and uses laser imaging with radar technology that can calculate distances.

It was first used in meteorology to measure clouds by the National Center for Atmospheric Research.

The term lidar is a portmanteau of ‘light and ‘radar.’

Lidar uses ultraviolet, visible, or near infrared light to image objects and can be used with a wide range of targets, including non-metallic objects, rocks, rain, chemical compounds, aerosols, clouds and even single molecules.

A narrow laser beam can be used to map physical features with very high resolution.

This new technique allowed researchers to map outlines of what they describe as dozens of newly discovered Maya cities hidden under thick jungle foliage centuries after they were abandoned by their original inhabitants.

Aircraft with a Lidar scanner produced three-dimensional maps of the surface by using light in the form of pulsed laser linked to a GPS system.

That’s a key challenge as Artemis-era explorers prepare to undertake the first modern missions to the Moon, and the first ever to its South Pole.

The Sun never rises more than 3 degrees above the lunar horizon in that region, leaving much of the terrain in deep shadow.

That makes distances to various points of interest difficult to eyeball – requiring maps and data to help astronauts as they plan future bases.

Initiated in 2020 with funding by NASA’s Early Career Initiative, the KNaCK project has partnered with Torch Technologies of Huntsville to develop the backpack prototype and associated navigation algorithms.

These algorithms will permit accurate mapping across a planet without GPS.

Lidar even works in pitch blackness, relieving astronauts of the need to haul cumbersome lighting rigs everywhere they go.

‘As human beings, we tend to orient ourselves based on landmarks – a specific building, a grove of trees,’ Zanetti said.

‘Those things don’t exist on the Moon. KNaCK will continuously enable explorers traversing the surface to determine their movement, direction, and orientation to distant peaks or to their base of operations.

‘They can even mark specific sites where they found some unique mineral or rock formation, so others can easily return for further study.’

This is vital for astronauts who will be working to a tight deadline, with excursions limited by the oxygen supply in their suits.

The team previously put the KNaCK system through its paces at that ancient volcanic crater – estimated to be 25,000-80,000 years old – in November 2021.

They also used it recently to conduct a 3D reconstruction of the 6-mile-long sea barrier dunes at NASA’s Kennedy Space Center in Florida. 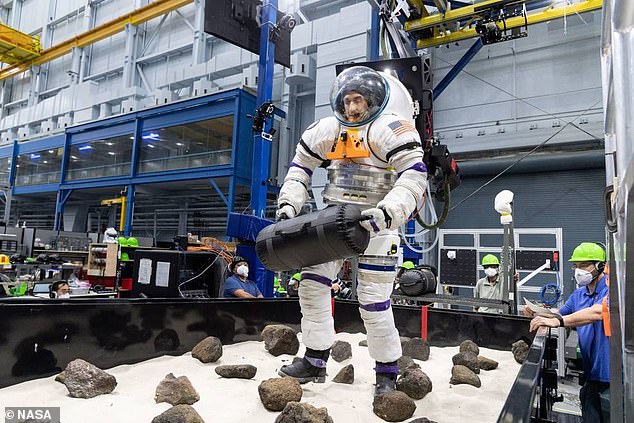 NASA researchers and industry partners developed the device that can not only aid astronauts in the airless wastelands of the Lunar South Pole, but also on the Earth 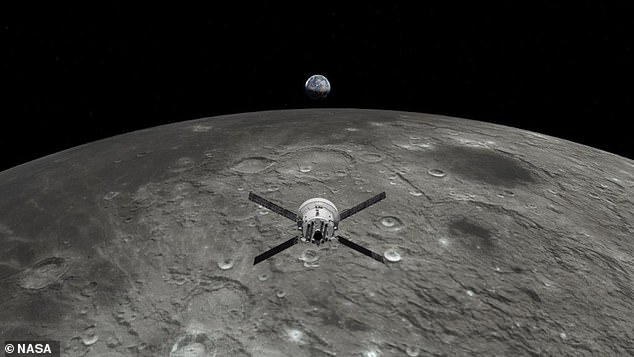 One suggested use is for a mountaineering expedition in an unchartered environment. The hikers can create a real-time map for others in the party, as well as other hikers that might come after them – all from a simple backpack

Kennedy and Marshall engineers will continue to use KNaCK to assess the impact of storms on dune erosion, ensuring the safety of future flight missions as they further refine the system.

Next, the KNaCK team will work to miniaturize the hardware – the backpack prototype weighs about 40 pounds – and harden the sensitive electronics against the punishing effects of microgravity and solar radiation.

‘Taking advantage of the latest advancements in lidar technology from Aeva, our next-generation space-hardened unit with support from Torch Technologies will be about the size of a soda can and could enable lunar surface operations like never before,’ Zanetti said.

He envisions mounting it on a rover or on the side of an astronaut’s helmet – which should leave plenty of room in future lunar mountaineers’ all-purpose backpacks.