Children that spend more than two hours a day watching TV ‘lose four months of schooling in both maths and reading’, study finds

Parents should limit their pre-teens to less than two hours of television a day to improve their achievement in school, new research suggests.

A study of more than 1,200 8 and 9-year-old children in Australia assessed academic performance over two years as well as tracking their screen time habits.

At least two hours of telly a day lowered reading performance by approximately four months of schooling over the two-year study period.

Just one hour of computer time a day was also associated with a similarly impaired level of academic success, but for numeracy.

The analysis by the Murdoch Children’s Research Institute in Melbourne showed no links between use of videogames and academic performance. 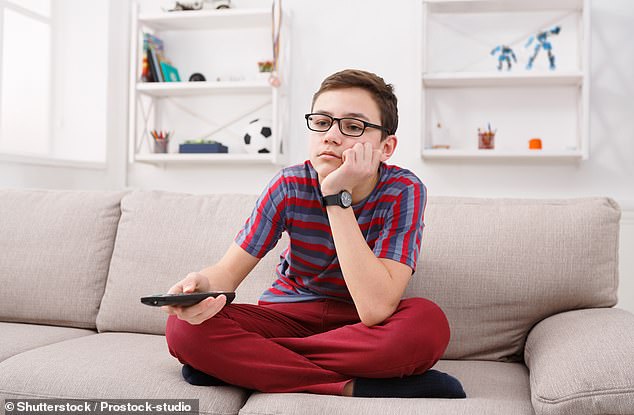 The research team say their findings could help guide parents, teachers and clinicians in restricting screen time of children.

While lots of research has been done into the impact of electronic screen time on obesity, sleep and other health issues, little has been done on academic attainment.

Data on children’s screen time was provided by parents.

‘This is the first large, longitudinal study of electronic media use and learning in primary school children, and results showed heavier users of television and computers had significant declines in reading and numeracy two years later compared with light users.’

She added: ‘These findings could help parents, teachers, and clinicians refine plans and recommendations for electronic media use in late childhood.

‘Future research could build on these results by examining continued associations in later secondary school.’

The findings were published in the journal PLOS One.

Staring at a computer screen for six hours a day is as bad for your skin as 25 minutes in the midday sun without sunscreen, study warns

Staring at a computer or mobile phone screen all week can be as bad for your skin as standing outside in the Sun without protection, a new study claims.

Scientists working for Unilever examined the effects of ‘blue light’ emitted by electronic devices on the skin and found it can cause premature ageing.

A study by the consumer goods giant found that 60 per cent of people now spend more than six hours per day in front of a digital device that emits blue light.

Five days of exposure to blue light for at least six hours per day can have the same impact on the skin as spending 25 minutes in the Sun without cream, they found.

To combat the worst effects of blue light exposure, experts recommend having breaks from the screen and using skin creams with antioxidants.

Researchers still don’t know the full effects of longer term exposure to blue light on the skin, but a number of studies, including this one, are trying to find out.

It is already known that blue light exposure can cause hyperpigmentation and premature ageing but the exact amount of exposure is unclear, researchers say.

Two in three people are unaware of the effect that blue light can have on their skin, Unilever has found as part of their study into exposure levels and their impact.

The blue light emitted from screens not only affects the skin but can also disturb our biological clocks, study authors explained.

Blue light can penetrate the skin far deeper than the UV light from the Sun – passing through the epidermis and dermis to the subcutis layer.