‘An amazing accomplishment… take your seat in history’: Ivanka Trump and AOC lead the plaudits for humble MIT graduate, 29, who created the algorithm that captured the first EVER direct image of a black hole

Scientists managed to capture the very first direct image of a black hole – and it was all thanks to a graduate at MIT.

Three years ago Dr. Katie Bouman, now 29, created an algorithm that collects data from telescopes across the world to stitch together a photograph of the phenomenon which is 55million light years away.

Her work, which essentially turned Earth into a virtual telescope, has been praised across the political spectrum by First Daughter Ivanka Trump, Kamala Harris and Alexandria Ocasio-Cortez, and by A-listers including Sophia Bush and Olivia Munn.

Without her groundbreaking work, the supermassive black hole would be simply impossible to capture because it would need a 10,000-kilometer wide telescope dish to even attempt it. The largest telescope dish in the world currently is just a 1,000ft in diameter.

Despite helping a team of scientists at Event Horizon Telescope make the impossible possible, the electrical engineering and computer science graduate hasn’t let the grand feat go to her head.

Sharing her achievement on Facebook, Bouman wrote: ‘Watching in disbelief as the first image I ever made of a black hole was in the process of being reconstructed.’ 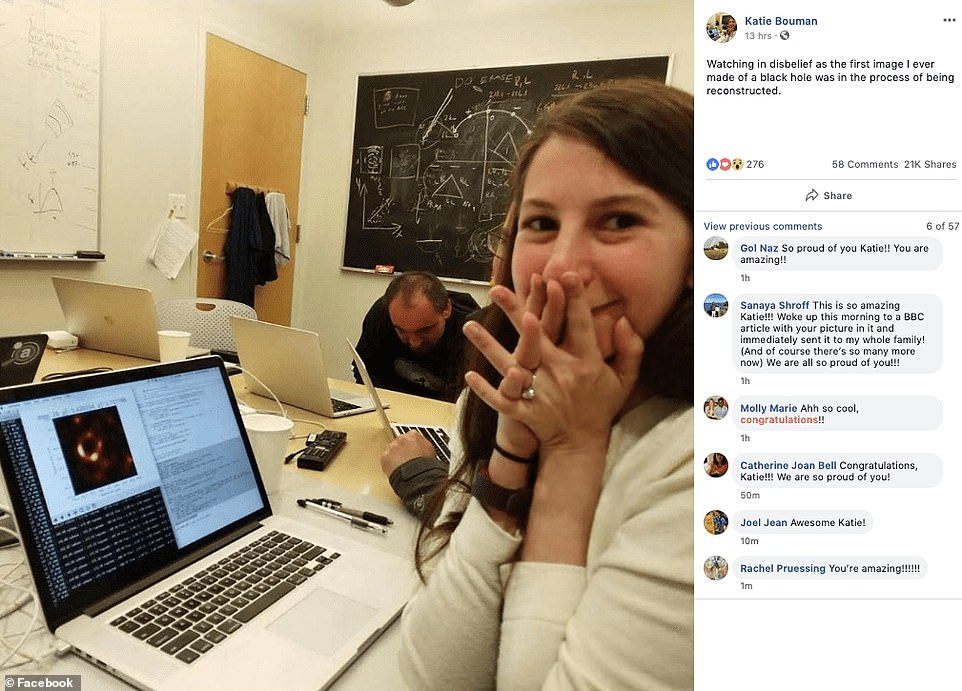 Katie Bouman, 29, was instrumental in capturing the very first image of a black hole. Here, she shared her achievement on Facebook with an incredibly humble post 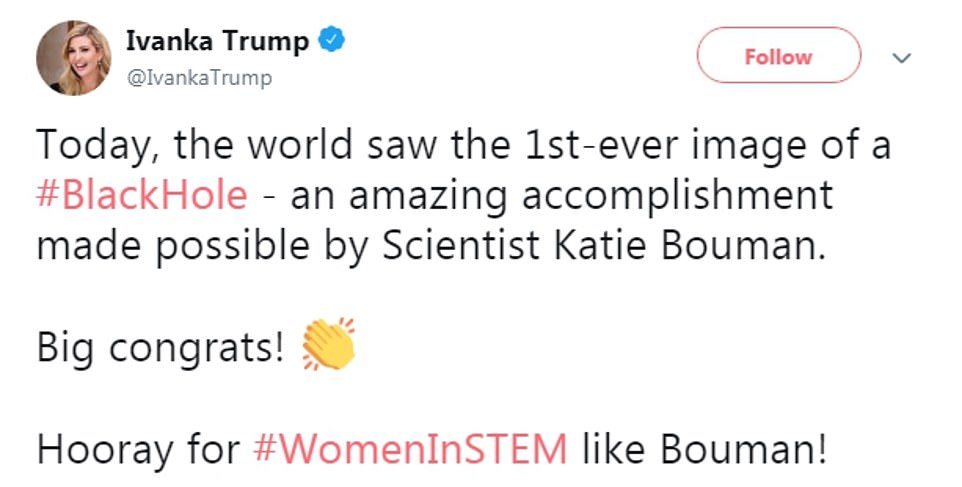 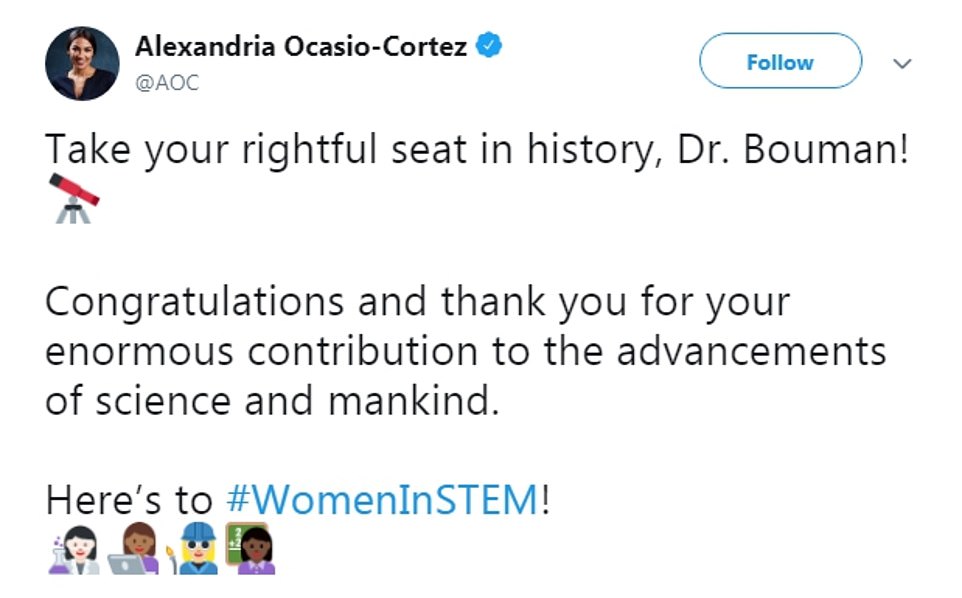 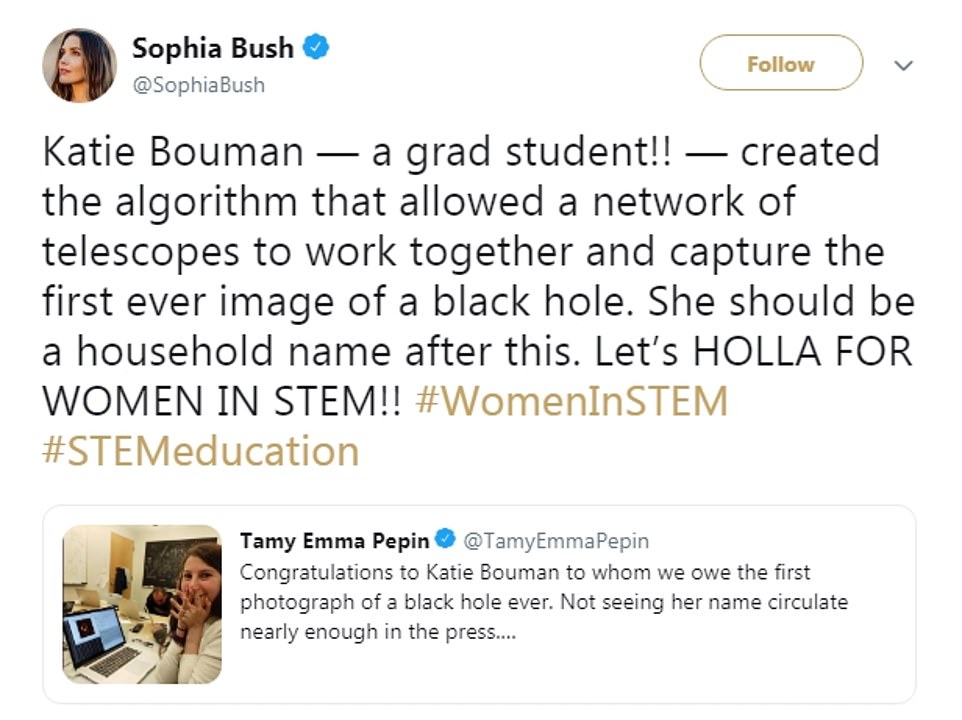 Her work, which essentially turned Earth into a virtual telescope, has been praised across the political spectrum by First Daughter Ivanka Trump, Kamala Harris and Alexandria Ocasio-Cortez, and by A-listers including Sophia Bush and Olivia Munn

The surprisingly humble post from a woman who was instrumental in one of the great scientific breakthroughs, adding major support for Einstein’s theory of General Relativity, has touched people across the world.

Determined to make sure she gets the credit and fame she rightfully deserves, one Twitter user, Tamy Emma Papin, shared the Facebook post from Bouman in the hopes it would go viral.

She wrote: ‘Congratulations to Katie Bouman to whom we owe the first photograph of a black hole ever. Not seeing her name circulate nearly enough in the press. Amazing work.

‘And here’s to more women in science (getting their credit and being remembered in history).’

Her tweet racked up more than 92,000 retweets and nearly 190,000 likes, and last night Bouman’s name was trending on Twitter.

AOC added: ‘Take your rightful seat in history, Dr. Bouman! Congratulations and thank you for your enormous contribution to the advancements of science and mankind. Here’s to #WomenInSTEM!’

Sophia Bush tweeted: ‘Katie Bouman — a grad student!! — created the algorithm that allowed a network of telescopes to work together and capture the first ever image of a black hole. She should be a household name after this. Let’s HOLLA FOR WOMEN IN STEM!!’

Bouman completed her PhD at MIT in 2017, after studying for her bachelors degree at University of Michigan. She is set to start work at Caltech as an assistant professor, with her research focusing on computational imaging, in the fall.

Her algorithm, which she calls CHIRP, for Continuous High-resolution Image Reconstruction using Patch priors, works to fill in the gaps left by the images taken at eight telescopes across the world. 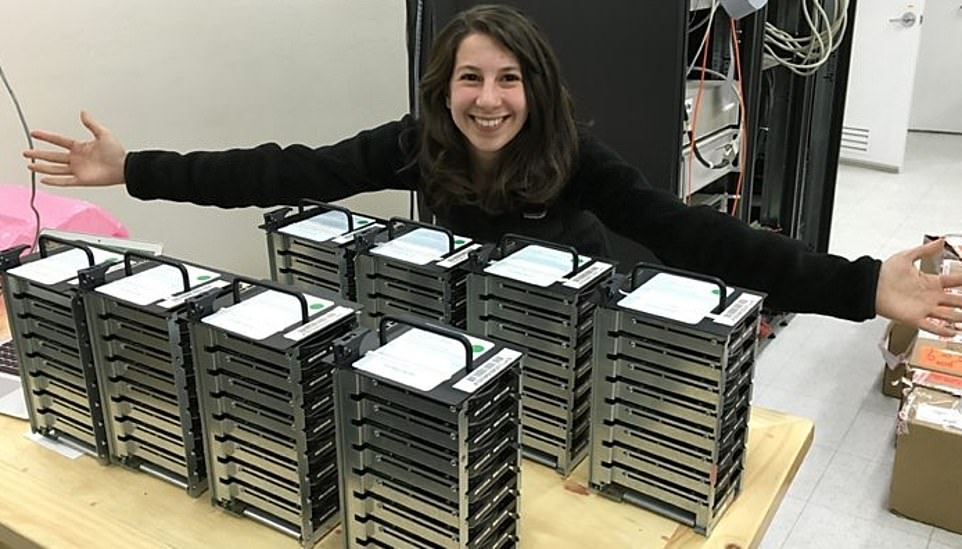 MIT’s Computer Science & Artificial Intelligence Lab compared Bouman to computer scientist Margaret Hamilton, who helped put man on the moon, by sharing this picture of her with stacks of hard drives of black hole image data

Even after the high praise for her work, Bouman told CNN: ‘No one of us could’ve done it alone. It came together because of lots of different people from many backgrounds.’

Yesterday, the team behind Event Horizon Telescope revealed the findings from their first run of observations.

Using a ‘virtual telescope’ built from eight radio observatories positioned at different points on the globe, the international team has spent the last few years probing Sagittarius A*, the supermassive black hole at the heart of the Milky Way, and another target called M87 in the Virgo cluster of galaxies.

While black holes are invisible by nature, the ultra-hot material swirling in their midst forms a ring of light around the perimeter that reveals the mouth of the object itself based on its silhouette. This boundary is known as the event horizon.

‘We have seen what we thought was unseeable,’ said EHT Director Sheperd Doeleman as he introduced the glowing orange ring that is the object at the center of Messier 87 (M87) – and our first direct look at a black hole.

The breakthrough could help to answer longstanding questions on the nature of black holes.