Michael Collins, who piloted the Apollo 11 spacecraft Columbia in orbit 60 miles above the moon while his crewmates, Neil Armstrong and Col. Buzz Aldrin, became the first men to walk on the lunar surface, died on Wednesday. He was 90.

A statement released by Mr. Collins’s family on Twitter said the cause was cancer. The statement did not say where he died.

It was an epic moment of exploration, an instant when the fantasy of science fiction writers became a reality. And when it transpired, Lt. Col. Michael Collins of the Air Force was the loneliest man in history.

When the lunar module Eagle, descending from Columbia, touched down on the moon on July 20, 1969, Colonel Collins lost contact with his crewmates and with NASA, his line of communication blocked as he passed over the moon’s far side. It was a blackout that would occur during a portion of each orbit he would make.

“I am alone now, truly alone, and absolutely isolated from any known life,” he wrote in recreating his thoughts for his 1974 memoir, “Carrying the Fire.”

“If a count were taken, the score would be three billion plus two over on the other side of the moon, and one plus God only knows what on this side,” he added. “I like the feeling. Outside my window I can see stars — and that is all. Where I know the moon to be, there is simply a black void.” 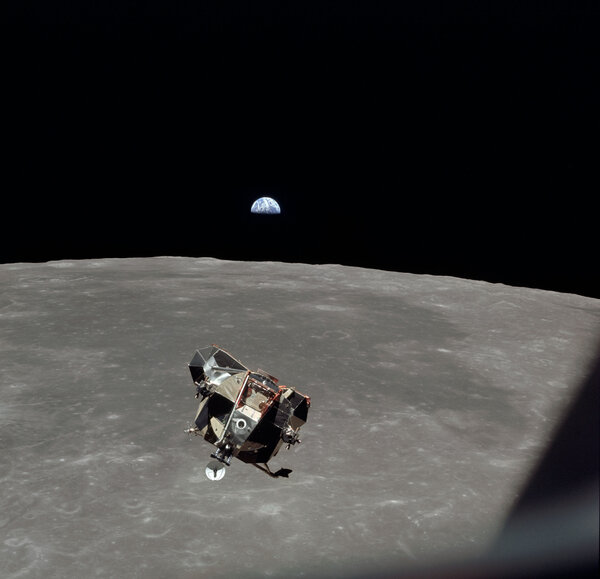 After 48 minutes cut off from any human voice, Colonel Collins emerged from the moon’s far side. “My windows suddenly flash full of sunlight as Columbia swings around into the dawn,” he wrote. “The moon appears quickly, dark, gray and craggy.”

Colonel Collins contacted NASA and learned that the lunar module had touched down safely, Mr. Armstrong having radioed: “Houston, Tranquillity Base here. The Eagle has landed.”

Peering down from Columbia as he orbited at 3,700 miles per hour, Colonel Collins spotted the lunar module briefly, and he made radio contact with Mr. Armstrong and Colonel Aldrin before their moonwalks. (He was too far above to actually see them walking on the surface.)

He also heard President Richard M. Nixon’s telephone call to the two men as they stood on the moon, congratulating them on the magnitude of that moment.

Colonel Collins, who had begun flying in 1952, had hurtled through the skies as a test pilot and orbited the Earth 43 times in the Gemini 10 capsule.

In 2019, he recalled his orbit of the moon for the 50th anniversary of the Apollo 11 mission. “I had this beautiful little domain,” he told The New York Times. “I was the emperor, the captain of it, and it was quite commodious. I had warm coffee, even.”

He may have been the “third man” that day, but he was busy completing the items on his task list. “I was nervous about getting every syllable of it exactly right, because this was going to be the day,” he remembered. “This was no fooling around. This was it.”

Colonel Collins was greatly worried about the moment when the lunar module was to blast off from the moon to dock with Columbia for the trip back to Earth. He knew that if the lander’s ascent engine malfunctioned, Mr. Armstrong and Colonel Aldrin might be stranded on the lunar surface or be sent into a wild orbit.

“What happens if they veer this way, that way, the other way?” Colonel Collins remarked 50 years later, noting that he had carried a packet around his neck containing 18 contingency plans for rescuing his crewmates.

As he wrote of the moment in his memoir: “My secret terror for the last six months has been leaving them on the moon and returning to Earth alone; now I am within minutes of finding out the truth of the matter. If they fail to rise from the surface, or crash back into it, I am not going to commit suicide; I am coming home, forthwith, but I will be a marked man for life and I know it.”

The ascent from the moon and the docking of Columbia and the lunar lander proved flawless, and when the Apollo 11 crew members splashed down in the Pacific Ocean, they were American heroes.

Michael Collins was a member of a distinguished military family.

He was born on Oct. 31, 1930, in Rome, when his father, Maj. Gen. James Lawton Collins, who had been an aide to John J. Pershing, the general of the armies, in Mexico and World War I, was the military attaché at the United States Embassy.

Michael was a nephew of Gen. J. Lawton Collins, known as Lightning Joe, a prominent World War II commander who also served as Army chief of staff during the Korean War.

Michael traveled with his father and his mother, Virginia (Stewart) Collins, to Army postings as a child, attended the St. Albans prep school in Washington and graduated from West Point in 1952.

He chose an Air Force career over the Army to avoid suggestions of nepotism in future assignments. He became a jet fighter pilot, and in 1960 he entered the test-pilot program at Edwards Air Force Base in California. He was selected by NASA three years later as part of a third group of astronauts chosen to participate in the Apollo mission to the moon.

In July 1966, he teamed with Cmdr. John W. Young of the Navy in the three-day Gemini 10 mission. They docked with an Agena rocket that had lifted off before them from Cape Canaveral, then fired its 16,000-pound thrust engine and reached an altitude of 475 miles, the farthest penetration of space that anyone had achieved at that time. Their Gemini spacecraft remained linked with the Agena for more than 38 hours in the first significant test of the docking technique to be employed by Columbia and Eagle.

The Gemini 10 astronauts carried out a second rendezvous when they came within a few inches of another Agena rocket, which had remained in space after the Gemini 8 mission. But they did not attempt to dock with it since its electrical system was no longer operating, as NASA had anticipated.

Colonel Collins became the first man to emerge from a spacecraft twice during a single mission. He stood up waist-high from an open hatch in the Gemini 10 to take photographs of ultraviolet rays given off by stars, and later carried out a spacewalk to retrieve a scientific device from the side of the Gemini 8 Agena. That was also the first time an astronaut had taken such a journey to reach another object in space.

Gemini 10 almost ran out of fuel before splashing down in the Atlantic Ocean, but it was a highly successful mission.

Colonel Collins left NASA a year after the Apollo 11 mission, when he was named assistant secretary of state for public affairs. He became director of the Smithsonian’s National Air and Space Museum in 1971 and presided over the opening of its building on the National Mall five years later to mark the nation’s bicentennial. He was appointed under secretary of the Smithsonian Institution in 1978 and was named vice president of the LTV Aerospace and Defense Company in 1980. He later formed a Washington-based consulting firm.

He retired from the Air Force Reserve in 1982 as a major general.

Having long been interested in poetry and literature, Mr. Collins had a gift for writing about space. In addition to “Carrying the Fire,” he was the author of “Liftoff: The Story of America’s Adventure in Space” (1988), and he described a hypothetical journey in “Mission to Mars” (1990).

“It is something new under the sun to find an astronaut who isn’t afraid to express his feelings,” Henry S.F. Cooper Jr. wrote in his Times review of “Carrying the Fire.”

Indeed, as Mr. Collins sought to capture the wonder and beauty of space, he wrote in that book, “I have been places and done things you simply would not believe. I feel like saying: I have dangled from a cord a hundred miles up; I have seen the earth eclipsed by the moon, and enjoyed it. I have seen the sun’s true light, unfiltered by any planet’s atmosphere. I have seen the ultimate black of infinity in a stillness undisturbed by any living thing.

“I do have this secret,” he added, “this precious thing, that I will always carry with me.”