Hoard of ‘nationally significant’ Bronze Age artefacts including a decorative horse harness and a 3,000-year-old sword is unearthed by a metal detectorist in the Scottish Borders

A metal detectorist has discovered artefacts in the Scottish Borders dating back 3,000 years, including a preserved horse harness and a sword in its scabbard.

Evidence of a decorative ‘rattle pendant’ from the harness was also discovered – the first one to be found in Scotland and only the third in the UK.

The hoard has been moved from the site in a large block of soil and taken to the National Museums Collection Centre in Edinburgh.

Experts, who described the objects as ‘nationally significant’, have dated them to the Bronze Age, which began around 2,000 BC and lasted for nearly 1,500 years. 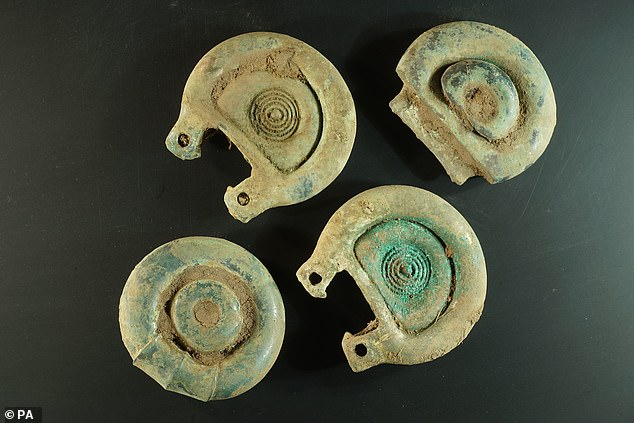 The period marks a time when bronze gradually replaced stone as the main material for making tools.

‘This is a nationally significant find – so few Bronze Age hoards have been excavated in Scotland,’ said Emily Freeman, head of the Treasure Trove Unit (TTU) overseeing the recovery and assessment of the find.

‘It was an amazing opportunity for us to not only recover bronze artefacts, but organic material as well. 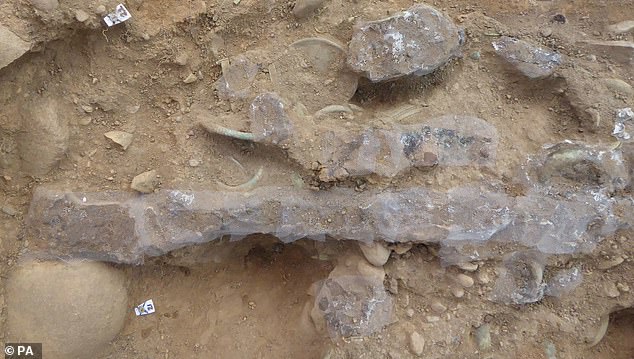 The ancient sword seen here still in its scabbard, built into the rock, as found during the dig near Peebles

‘There is still a lot of work to be done to assess the artefacts and understand why they were deposited.’

The collection was promptly reported to Treasure Trove and excavated by archaeologists from National Museums Scotland.

The metal objects are believed to be decorative and functional pieces of a Bronze Age horse harness, while the sword is still in its scabbard and encrusted within the chunk of rock.

The complete horse harness – preserved by the soil – and the sword have been dated as being from 1000 to 900 BC.

‘These are rare objects, some of which are unique in Scotland,’ said National Museums Scotland.

‘They have affinities with objects across Europe and were likely deposited by a well-connected community.

‘The organic preservation in the hoard is remarkable and includes leather and wood that is three thousand years old.

‘This allows archaeologists to see how the horse harness was assembled – this has never been seen before in Britain.’ 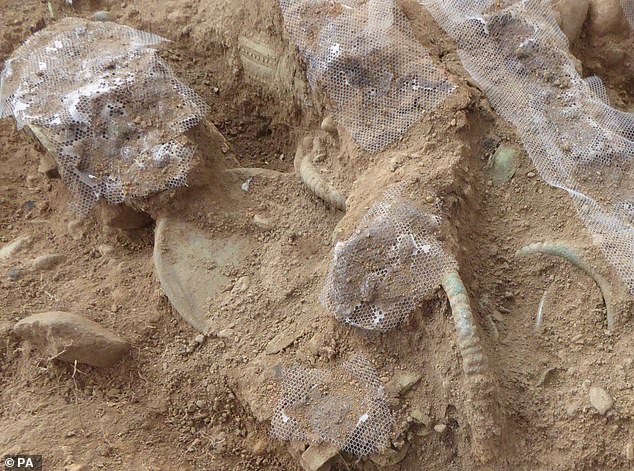 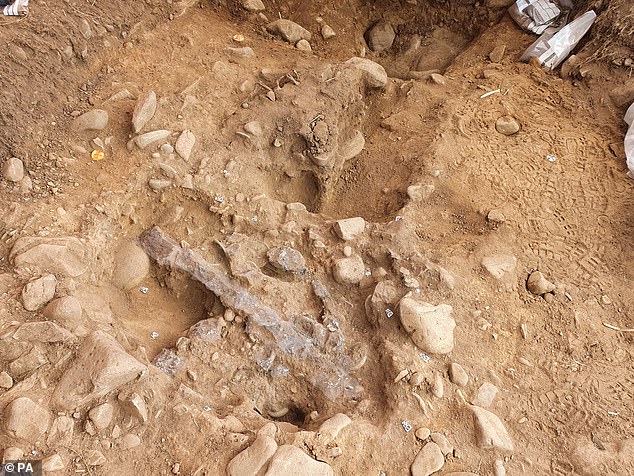 The hoard was uncovered by Mariusz Stepien, 44, who was searching a field near Peebles with friends on June 21 this year when he found a bronze object buried about a foot and a half underground.

The group camped in the field and built a shelter to protect the find from the elements while archaeologists spent 22 days investigating.

‘I thought I’ve never seen anything like this before and felt from the very beginning that this might be something spectacular and I’ve just discovered a big part of Scottish history,’ said Stepien.

‘I was over the moon, actually shaking with happiness.

‘We wanted to be a part of the excavation from the beginning to the end. 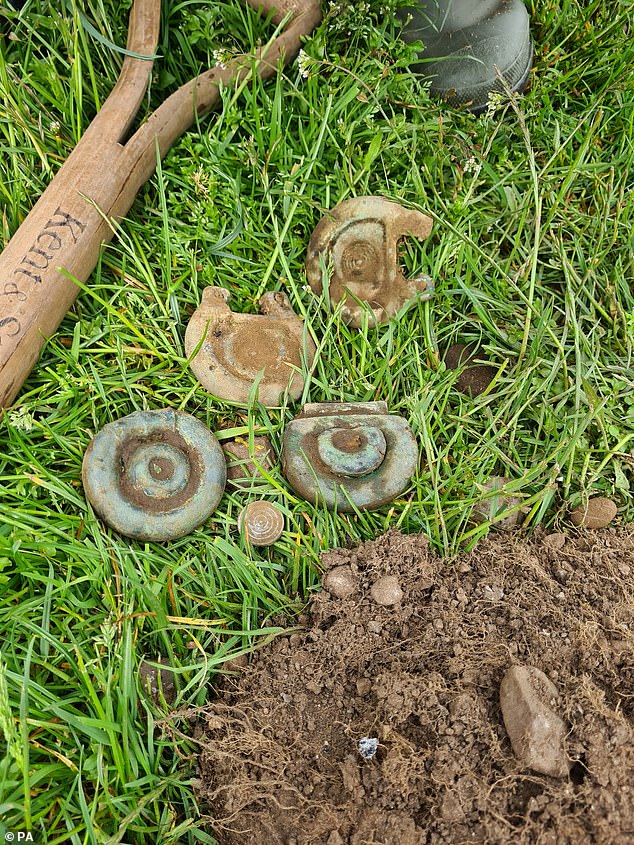 The objects after being discovered by the metal detectorist. They’ve been described as ‘nationally significant’

‘I will never forget those 22 days spent in the field. Every day there were new objects coming out which changed the context of the find, every day we learned something new.

‘I’m so pleased that the earth revealed to me something that was hidden for more than 3,000 years. I still can’t believe it happened.’

As he was getting strong signals from the earth around the initial object, Stepien contacted the TTU to report his find. 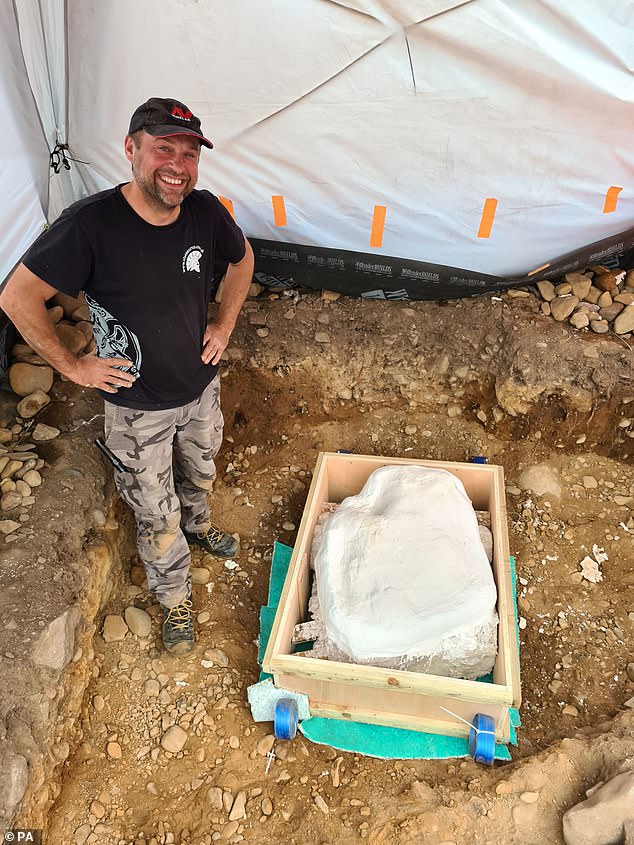 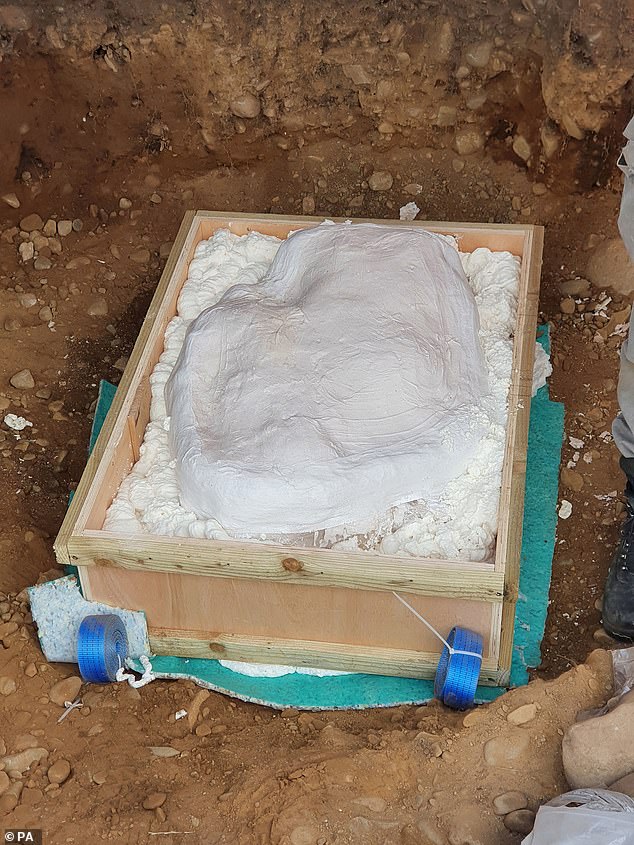 A close-up of the collection, seen here being prepared for transportation. They’ve been moved to the National Museums Collection Centre in Edinburgh 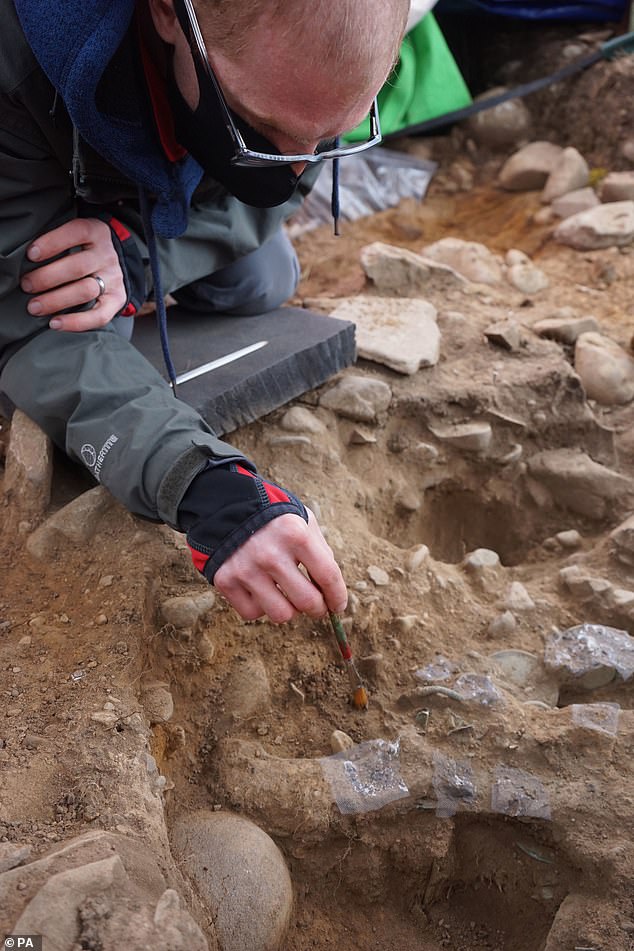 An archaeologist working at the site near Peebles, after metal detectorist Mariusz Stepien found objects, in the Scottish Borders

Scotland’s TTU is ‘the first port of call’ for new discoveries and carries out investigations and object assessments of new objects.

All ancient objects newly discovered in Scotland need to be reported to the TTU, as they belong to the Crown, whether or not they’re precious metal.

‘We could not have achieved this without the responsible actions of the finder or the support of the landowners,’ said Freeman.

‘The finder was quick to action when they realised that they had found an in-situ hoard, which resulted in the TTU and National Museums Scotland being on site within days of discovery.’

WHAT DO WE KNOW ABOUT BRONZE AGE BRITAIN?

It was a time when sophisticated bronze tools, pots and weapons were brought over from continental Europe.

Skulls uncovered from this period are vastly different from Stone Age skulls, which suggests this period of migration brought new ideas and new blood from overseas.

Bronze is made from 10 per cent tin and 90 per cent copper, both of which were in abundance at the time.

Crete appears to be a centre of expansion for the bronze trade in Europe and weapons first came over from the Mycenaeans in southern Russia.

It is widely believed bronze first came to Britain with the Beaker people who lived about 4,500 years ago in the temperate zones of Europe.

They received their name from their distinctive bell-shaped beakers, decorated in horizontal zones by finely toothed stamps.

The decorated pots are almost ubiquitous across Europe, and could have been used as drinking vessels or ceremonious urns.

Believed to be originally from Spain, the Beaker folk soon spread into central and western Europe in their search for metals.

Textile production was also under way at the time and people wore wrap-around skirts, tunics and cloaks. Men were generally clean-shaven and had long hair.

The dead were cremated or buried in small cemeteries near settlements.

This period was followed by the Iron Age which started around 650 BC and finished around 43 AD.