Meta will launch the first drag show in the ‘metaverse’ – a collective virtual shared space featuring avatars of real people.

‘Queens of the Metaverse’ is a mixed reality drag show that will demonstrate how technology can ‘unlock possibilities in fashion design’, Meta says.

They will each debut a ‘show-stopping drag look’ using Meta’s VR and AR technologies, created by three British designers from the LGBTQ+ community.

Anyone who has watched ‘RuPaul’s Drag Race’ will be familiar with the extravagant fashion designs on display by some of the best drag artists.

But the new show will use VR, AR, and avatars to free themselves from the ‘limitations of the physical world’ and create even more outlandish outfits, Meta says.

The outfits have all been designed virtually, will be made into physical garments and will be debuted at an in-person event to be held in London next month. 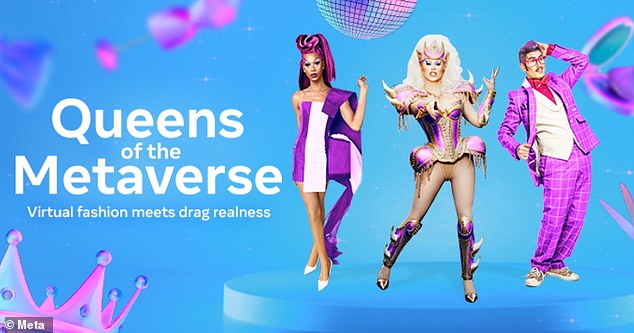 ‘Queens of the Metaverse’ is a mixed reality drag show that will demonstrate how technology can ‘unlock possibilities in fashion design’, Meta says 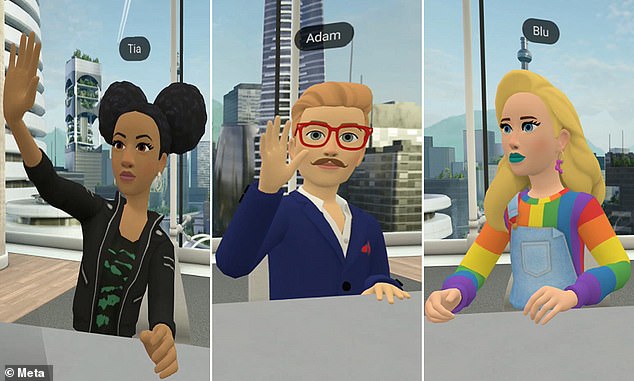 Meta has enlisted three drag acts – Blu Hydrangea (winner of RuPaul’s Drag Race: UK vs. The World), Tia Kofi (Pop artist and star of RuPaul’s Drag Race Season 2) and Adam All (one of the world’s most well known ‘Drag Kings’). The three drag acts and their designers collaborated on their creations in Horizon Workrooms, Meta’s VR workspace platform. Their respective avatars are pictured here 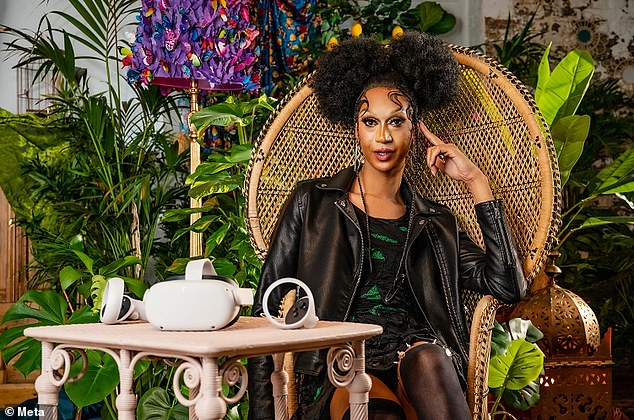 Tia Kofi (pictured) is a British drag queen from Clapham, South London. He is one of three drag acts enlisted by Meta for the new drag show in the metaverse

WHAT IS THE METAVERSE?

Mark Zuckerberg’s company changed its name from Facebook to Meta in October 2021, as part of its long-term project to turn its social media platform into a metaverse.

The metaverse is a collective virtual shared space featuring avatars of real people, accessible over the internet.

Whether the metaverse fully exists yet is debatable. Meta has already introduced some platforms, like Horizon Workrooms, that provide a glimpse of what the metaverse is like.

But by definition the metaverse is a digital space that always exists – one that multiple people are always logged into at one time. This is what Meta is working towards.

Part of Meta’s ambition is turning Facebook into a metaverse. In the future, Facebook will be accessible within the metaverse using virtual reality (VR) and augmented reality (AR) headsets and smart glasses.

‘Creative communities are central to the development of the metaverse, ensuring that we are building a space for each and every one of us,’ said Ineke Paulsen, Meta’s director of EMEA Marketing.

‘The metaverse and its technologies will enable these creatives to take their imaginations further than they ever thought possible.

‘Drag is art, culture, performance. It’s visual storytelling. The hope is that technologies like virtual reality will help the drag community and other creatives unleash their potential in new and exciting ways.’

The three drag acts and their designers collaborated on their creations in Horizon Workrooms, Meta’s VR workspace platform.

The designer for Blu Hydrangea is Nwora Emenike, a queer, non-binary stylist. ‘Non-binary’ is a term used to describe people who do not identify as either masculine or feminine.

Creating for Tia Kofi is Sal Mohammed, a ‘queer and genderfluid’ NHS worker and life coach who has a passion for drag. Genderfluid refers to someone who does not identify themselves as having a fixed gender.

Lastly, designing for Adam All is Christie Lau, a non-binary Central Saint Martins graduate whose work ‘blends physical and digital fashion’, according to Meta.

All of the virtually designed outfits will be turned into physical garments, to be revealed at an event in London in September.

Using AR, each outfit will come to life as an animated artwork as the drag artists work their ‘show-stopping’ acts on the runway.

A live audience at the event will be able to see the AR elements of the dresses come to life through their phones. The AR filters will also be broadcast on screens at the event.

Virtual reality is a computer-generated simulation of an environment or situation.

It immerses the user by making them feel like they are in the simulated reality through images and sounds.

For example, in VR, you could feel like you’re climbing a mountain while you’re at home.

In contrast, augmented reality layers computer-generated images on top of an existing reality.

AR is developed into apps to bring digital components into the real world.

For example, in the Pokemon Go app, the characters seem to appear in real world scenarios.

Details of how to view the event remotely will be confirmed closer to the date.

The event in September will be hosted by Dominic Skinner, a make-up artist and star of the BBC Three series ‘Glow Up: Britain’s Next Make-Up Star’.

The content of the show will be directed by Matt Timmiss, a London-based film director specialising in ‘queer films and narratives in the drag community’.

Speaking about the convergence of drag and cutting-edge technology, Blu Hydrangea said: ‘Social media and new technologies allow us to make our drag bigger and better.

‘The possibilities are limitless for creativity and our community. The metaverse will be a new way to communicate with other queer artists and people around the world without being in the same room as them, which is amazing.’

Tia Kofi said: ‘The best thing about technology is that it brings everyone closer together.

‘During the pandemic, everybody had to get creative and use technology to stay in contact and keep drag alive. Imagine if we could have done that in virtual reality, feeling like we were all together, it would have been gorgeous. That’s the future.’

Adam All said: ‘I’m passionate about anything that pushes boundaries in drag, and it doesn’t get much more boundary-smashing than creating something brand new in the metaverse that couldn’t have been created otherwise.

‘Hopefully the future of drag will see more inclusivity and I think technology like the metaverse could play a huge part in improving the visibility of inclusive queer spaces and creatives.’ 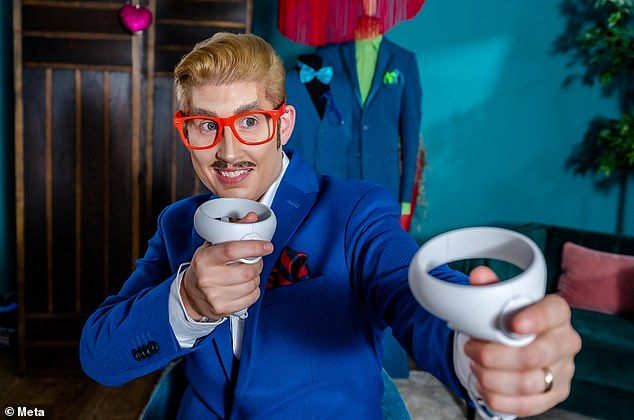 Adam All (pictured) from Winchester, Hampshire, is one of the world’s most well known ‘Drag Kings’ 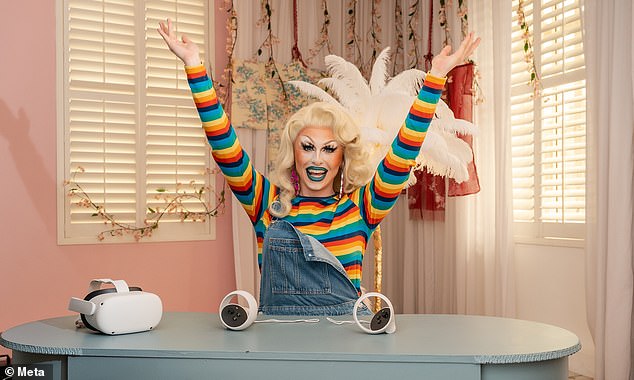 ‘Queens of the Metaverse’ marks a departure from Meta’s recent metaverse-themed projects, which have mostly been focused on workplace collaboration and gaming.

The term ‘metaverse’, coined in the 1992 dystopian novel ‘Snow Crash’, is used to describe immersive, shared spaces accessed across different platforms where the physical and digital converge.

Zuckerberg, who co-founded Meta (formerly known as Facebook) in his dormitory room at Harvard University in 2004, has described the metaverse as an ’embodied internet’.

Within years, Facebook users will be able to use the platform not on their phone or computer, but by donning a headset.

Rather than swiping the screen of a device, they could potentially meet up with a Facebook friend in the virtual shared space – like an ultra-realistic simulation of another planet or an idyllic garden – and vocally chat to each other’s avatars.

‘It’ll be characterised by social presence, the feeling that you’re right there with another person, no matter where in the world you happen to be,’ Meta says.

‘The metaverse is still a ways off, but parts of it are already here and even more are on the horizon.’

Meta renamed itself in October, as part of its long-term project to turn its social media platform into a metaverse.

THE FACEBOOK ‘METAVERSE’: A VIRTUAL WORLD WITHIN A WORLD

In a recent interview, Mark Zuckerberg said that over the next five years, he wants people to think of Facebook not as a social media company, but a ‘metaverse’ company.

That is one that is akin to a virtual environment where people can work and play for most of their 24 hours without leaving their home.

‘And my hope, if we do this well, I think over the next five years or so, in this next chapter of our company, I think we will effectively transition from people seeing us as primarily being a social media company to being a metaverse company,’ Zuckerberg said in the interview with The Verge.

‘And obviously, all of the work that we’re doing across the apps that people use today contribute directly to this vision in terms of building community and creators.

‘But this is something that I’m spending a lot of time on, thinking a lot about, we’re working on a ton. And I think it’s just a big part of the next chapter for the work that we’re going to do in the whole industry.’

So what exactly is the metaverse?

As Zuckerberg describes it, it’s a ‘vision’ that spans the entire tech industry, calling it the successor to the mobile internet.

‘But you can think about the metaverse as an embodied internet, where instead of just viewing content — you are in it,’ he continued.

‘And you feel present with other people as if you were in other places, having different experiences that you couldn’t necessarily do on a 2D app or webpage, like dancing, for example, or different types of fitness.’

The Facebook CEO says his vision – which he has been working on for several months – would not only reach into virtual reality, but augmented reality, computers, mobile devices and game consoles as well.