Swansea: Man rings doorbell to ask for milk at midnight

The video shows the man turning up outside a house in Swansea shortly after 12.20am on Wednesday morning, carrying the box of cereal in his left hand. When the front door was opened, he asked the homeowner if he could have some milk, but was refused in no uncertain terms.

Craig Allen, who lives at the property with his partner, captured the bizarre request on his doorbell camera, which recorded the incident at 12.21am.

In the video, the man, dressed in a beanie hat and hoodie and holding a box of cereal which appears to be Crunchy Nut Corn Flakes, walks up to the house and rings the bell. An automated voice from the security doorbell system then responds by saying “please wait, it may take me a moment to answer”. 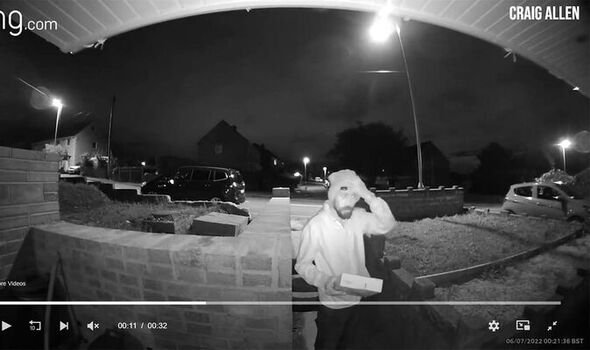 There is then a wait of around ten seconds before the door is opened. The man with the cereal box then introduces himself and says “I can’t pinch some milk off you by any chance?”. Mr Allen, having opened the door despite the inconvenient hour, refuses in a direct manner, telling the hungry door knocker: “F*** off mate.”

The man then apologises and calmly walks off.

Mr Allen, who shared the clip on social media to much hilarity, told WalesOnline that he was just about to go to bed when the unusual request occurred.

“We were just locking up and getting ready for bed when the doorbell rang,” he said.

“I don’t know what he would have done if I had given him some milk, just scooped it out of the box? I don’t know!”