From a bra that converts into a face mask to a study showing ducks commit homosexual necrophilia: MailOnline reveals the wackiest winners of the annual Ig Nobel Prize

Last night the annual Ig Nobel awards took place, marking another year of weird and wonderful scientific achievements getting the recognition they deserve.

This year’s winners include a study into the sex lives of constipated scorpions, an experiment involving a moose crash-test dummy, and research into why ducklings swim in a line behind their mother.

An annual spoof on the Nobel Prize, the Ig Nobel Awards honour research that ‘makes you laugh then makes you think’.

The awards are usually held at Harvard’s Sanders Theatre, but 2022 marked the third consecutive year of the ceremony being held online due to Covid.

Winners were awarded in 10 categories for their achievements, and received a certificate, a homemade trophy and a defunct $10 trillion Zimbabwean dollar note.

Here, MailOnline takes a look at some of the most weird, amusing and gruesome research to be awarded in Ig Nobel history since the very first ceremony in 1991. 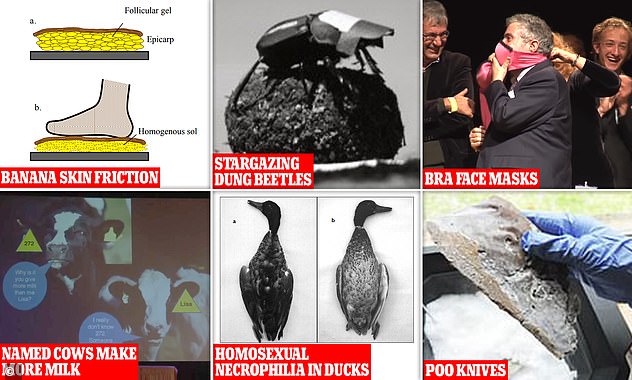 Here are some of the best winners of the Ig Nobel awards, which have taken place every year since 1991 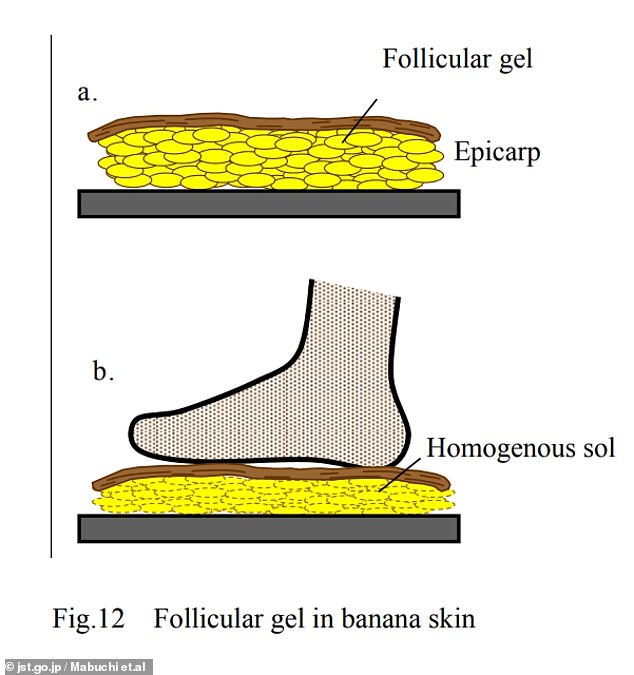 WHAT ARE THE IG NOBEL AWARDS?

The Ig Nobel Prize is a ‘spoof’ award run by the science humour magazine Annals of Improbable Research.

It was first awarded in 1991 to celebrate ten unusual or trivial achievements in scientific research.

The aim is to ‘honour achievements that first make people laugh, and then make them think.’

Winners are awarded under 10 categories, which can change year by year.

The name of the award is a pun on the Nobel Prize, which it parodies, and on the word ignoble (not noble).

The Ig Nobel Prizes are presented by Nobel laureates in a ceremony at the Sanders Theater, Harvard University.

For the past three years they have been held online due to coronavirus.

In 2014, a team of experts from Japan were awarded the Physics prize for shedding light on whether banana skins really are as slippery as they’re portrayed in cartoons.

Following experiments that duplicated ‘the actual situation of a slipping accident’, they found that friction was lowered about one sixth by the lubricating effect of the banana skin.

They also found that gel spilled out from follicles of banana skin when crushed underfoot was largely to blame for its slippery reputation.

‘The lubricating ability of banana skin can be proved excellent,’ they concluded.

The Obstetrics prize in 2017 was awarded to Spanish researchers for experiments that involved a bizarre intravaginal device.

Babypod is a small speaker that’s placed inside the vagina to play music to the baby in the womb.

Responses from the babies were quantified by recording facial movements identified using ultrasound.

According to the team, the fetuses responded to music transmitted intravaginally by moving their mouth and tongue, ‘as if they were trying to speak or sing’.

In 2009, the Veterinary Medicine prize was awarded to researchers from Newcastle University for a discovery that gave dairy farmers a potential method of increasing milk yields.

Catherine Douglas and Peter Rowlinson discovered that cows who have names give more milk than cows that are nameless.

In his acceptance speech, Dr Rowlinson said: ‘We undertook a series of studies on young dairy cattle which showed benefits of positive treatment during rearing. From a survey came the finding that cows with names gave more milk.’

His research partner was unable to travel because she recently gave birth, so she sent a photo of herself with her new daughter dressed in a cow suit. 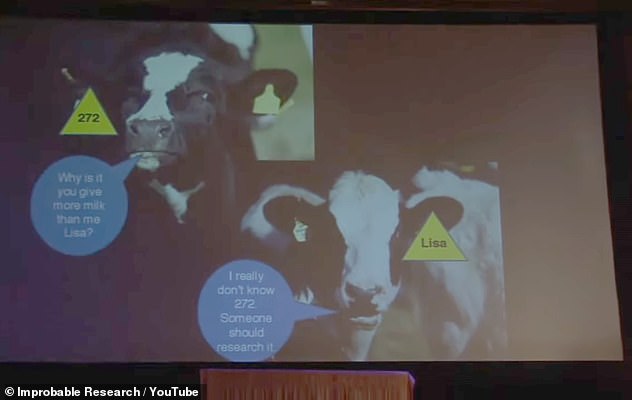 Of all the Ig Nobel winners since the inaugural ceremony in 1991, one of the most well-known is the winner of the Biology prize in 2003.

Kees Moeliker, a Dutch biologist and director of the Natural History Museum in Rotterdam, was awarded for describing the first scientifically reported case of homosexual necrophilia in the Mallard duck.

As recounted in his paper, Moeliker heard a male duck fatally colliding with the glass wall of the museum before seeing it being raped ‘almost continuously for 75 minutes’ by another male. 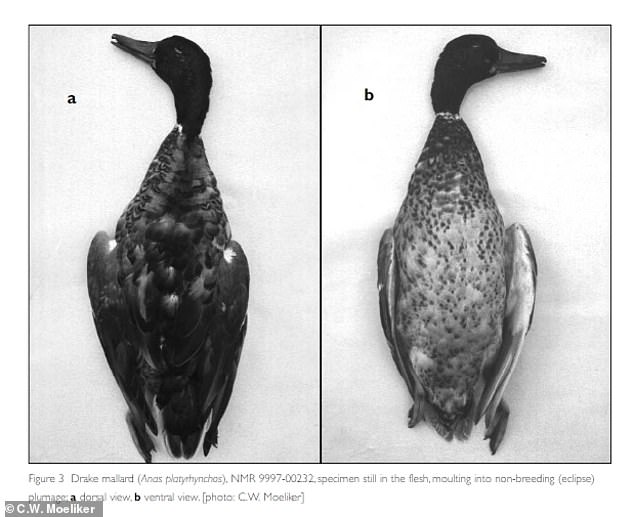 ‘Dissection showed that the rape victim indeed was of the male sex,’ he says in the paper. ‘Gonads seen and preserved.

‘To the best of my knowledge, this case is the first described case of homosexual necrophilia in the mallard.’

Since becoming an Ig Nobel champion, Moeliker has given a TED talk, entitled, ‘How a dead duck changed my life’.

The 1998 prize for Statistics was awarded to two researchers for their report, ‘The Relationships Among Height, Penile Length, and Foot Size’.

Study authors Jerald Bain of Toronto’s Mt. Sinai Hospital in and Kerry Siminoski of the University of Alberta wanted to see whether ‘folk myth’ that men with large feet have a big penis has ‘any basis in fact’.

After measuring height, penis length and shoe size of 63 ‘normally virilized men’, the duo concluded that the correlation between the measurements was a weak one.

‘Height and foot size would not serve as practical estimators of penis length,’ they wrote in their report, published in Annals of Sex Research.

More than a decade after the Covid pandemic started, researchers from Chicago showcased an ingenuous two-in-one invention.

Dr Elena Bodnar and colleagues won the Public Health award for their bra that can quickly convert into a two protective face masks. 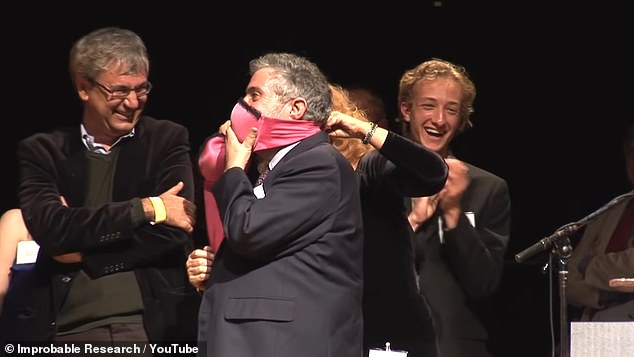 The mask could be quickly administered in less than 30 seconds in the case of a gas leak or even as protection against viral particles.

Dr Bodnar, originally from Ukraine, demonstrated the innovation on a trio of Nobel-award winning scientists in attendance at that year’s ceremony.

In her acceptance speech, she said: ‘Isn’t that wonderful that women have two breasts, not just one? We can save not only our own life, but also the life of a man of our choice next to us.’

Under the Materials Science category in 2020, Metin Eren from Kent State University in Ohio was awarded for fashioning a knife out of frozen human faeces.

Eren and his team aimed to recreate the story of an Inuit man in Canada who fashioned a knife out of his own excrement to butcher a dog.

They used real human faeces, frozen to -50°C, and filed it to a sharp edge before trying to cut meat with it – without much success. 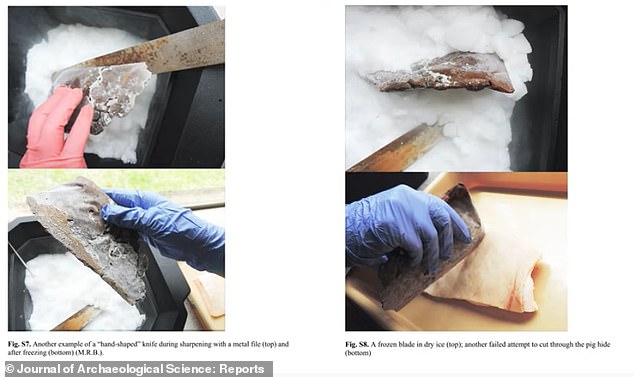 When they tried to slice meat, the knife-edge ‘simply melted upon contact, leaving streaks of faecal matter’.

‘The poop knives failed miserably,’ Eren said. ‘There’s not a lot of basis empirically for this fantastic story.

‘The point of this was to show that evidence and fact checking are vital,’ he said of his research, which was published in Journal of Archaeological Science: Reports.

In 2013, researchers from Sweden and South Africa were given the Biology/Astronomy prize for showing that ‘dung beetles use the Milky Way for orientation’.

The experts strapped small cardboard caps over the eyes of dung beetles to obscure their vision as they moved with their dung balls.

It was already known that dung beetles roll their dung balls along the ground in straight lines.

But the researchers found that their ability to do this was severely impeded when they obscured their vision with small cardboard caps over their eyes.

After strapping cardboard over the eyes of dung beetles, researchers were awarded for discovering that when the insects can’t see the starry sky their ability to walk in a straight line is impeded

The team said dung beetles orient to the starry sky to move along straight paths, and do not orientate to the individual stars, but to the Milky Way.

In a few instances, Ig Nobel awards have been given to governments and official bodies for spectacular fails or astonishing incompetence.

In a spectacular example of why it’s important to check things before giving them the all clear, the 2001 Technology award was given to the Australian Patent Office for granting an innovation patent for the wheel.

The award was given jointly to the patent office and John Keogh, a freelance patent lawyer based in Victoria, Australia.

In an attempt to test Australia’s new national patent system, Keogh successfully patented the wheel, by dressing it up in fancy language as a ‘circular transportation facilitation device’.

APPLIED CARDIOLOGY PRIZE Eliska Prochazkova, Elio Sjak-Shie, Friederike Behrens, Daniel Lindh, and Mariska Kret, for seeking and finding evidence that when new romantic partners meet for the first time, and feel attracted to each other, their heart rates synchronize.

BIOLOGY PRIZE Solimary García-Hernández and Glauco Machado, for studying whether and how constipation affects the mating prospects of scorpions.

ENGINEERING PRIZE Gen Matsuzaki, Kazuo Ohuchi, Masaru Uehara, Yoshiyuki Ueno, and Goro Imura, for trying to discover the most efficient way for people to use their fingers when turning a knob.

ECONOMICS PRIZE Alessandro Pluchino, Alessio Emanuele Biondo, and Andrea Rapisarda, for explaining, mathematically, why success most often goes not to the most talented people, but instead to the luckiest.