To boldly go where no one has gone before you need a running start: NASA engineer claims initial motion is the key to ensuring a real-life WARP ENGINE is in ‘drive’ not ‘reverse’

A NASA engineer has claimed that getting a ‘running start’ would be the key to ensuring that a real-life, Star Trek-style warp engine is in drive, and not reverse.

In Albert Einstein’s theory of special relativity, our Universe comes with a speed limit — with nothing able to travel faster than the speed of light.

This would make space travel to most planets impractical in the scale of a human lifetime, if one was confined to relativistic speeds.

However, a warp drive could — in theory — allow spacecraft to cheat their way around this rule, by moving parts of spacetime instead of the ship itself.

The energy density distribution required to bend space is symmetrical — meaning a craft starting at rest might as easily shoot off in reverse as it would go the right way.

This means that before Captain Kirk says ‘Ahead Warp 1, Mr Sulu’, he should be checking the Enterprise is already moving, slower-than-light, in the right direction. 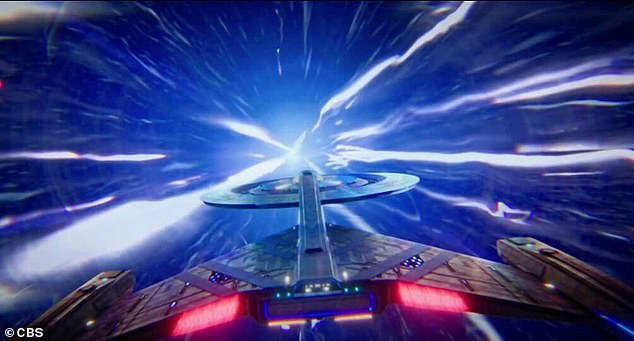 A NASA engineer claimed that getting a ‘running start’ would be the key to ensuring that a real-life, Star Trek-style warp engine is in drive, and not reverse. Pictured, Star Trek’s USS Discovery travels at warp speed — and is going in the right direction

Developed by the physicist Miguel Alcubierre in 1994, the so-called ‘Alcubierre warp drive’ is a speculative concept for how a spacecraft could effectively achieve faster-than-light travel based on a solution to Einstein’s field equations in special relativity.

Faster-than-light travel is thought to be impossible, as particles with mass get heavier as they move faster, making it increasingly difficult to accelerate them more.

In fact, such a hypothetical particle travelling at the speed of light — 186,282 miles per second (299,792 kilometres per second) — would gain infinite mass, and require an infinite amount of energy to move.

The only exceptions to this principle are those particles which have zero mass at rest — such as photons and gluons — which can travel at the speed of light, explaining how light itself manages to travel at light speed.

According to theoretical physicists, however, there may be ways to essentially ‘cheat’ this light-speed barrier — achieving so-called ‘apparent’ faster-than-light travel while technically still moving at subluminal (that is, slower-than-light) speeds.

One such wheeze, for example, would be to create a so-called wormhole — known to physicists as an ‘Einstein–Rosen bridge’ — in which a tunnel in spacetime would connect two disparate parts of the universe, providing a short-cut for spacecraft.

Warp drive is another potential approach, one which imagines the possibility of bending spacetime around a craft such that space in front of the vessel is contracted and space behind it is expanded.

A warp-capable ship would travel in a ‘bubble’ of regular spacetime that itself is displaced across the universe at faster-than-light speeds — while the ship itself remains at subluminal speeds within the bubble, in accordance with Einstein’s relativity.

Essentially, a warp-capable ship would travel in a ‘bubble’ of regular spacetime (pictured as in the centre of this illustration as a two-dimensional plane, with regions of contracted and expanded spacetime either side) that itself is displaced across the universe at faster-than-light speeds — while the ship technically remains at subluminal speeds within the bubble

In Alcubierre’s theory, ‘the spacecraft would depart the point of origin using some conventional propulsion system and travel a distance, then bring the craft to a stop relative to the departure point,’ Dr White explains in his paper.

‘The field would be turned on and the craft would zip off to its stellar destination, never locally breaking the speed of light — but covering the distance in an arbitrarily short period of time just the same.

‘This approach would allow a journey to, say, Alpha Centauri as measured by an Earth-bound observer (and spacecraft clocks) measured in weeks or months, rather than decades or centuries.’ 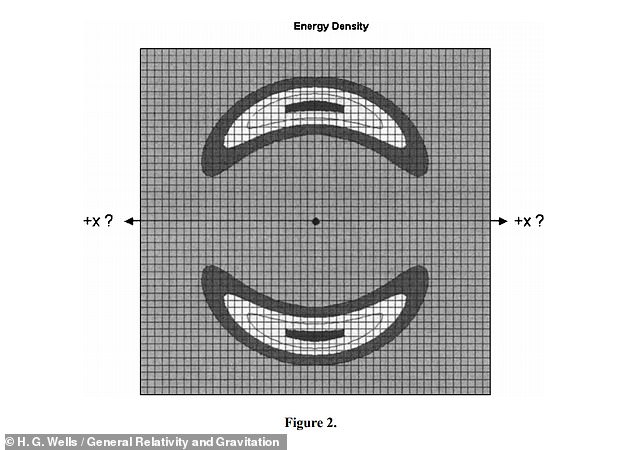 One issue with Alcubierre’s original theory was that the so-called stress energy tensor that generates the warp field would be entirely symmetrical about the surface parallel to spacecraft’s bow–stern axis — as pictured in this illustration. As Dr White put it: ‘How does the ship know which way to go? The energy density curves local space-time, but since it has no bias along the x-axis, how does space know which way to contract and expand?’

One issue with Alcubierre’s original theory was that the so-called ‘stress energy tensor’ that generates the warp field would be entirely symmetrical about the surface parallel to the spacecraft’s bow–stern axis.

To get around this, Dr White proposed in 2003 that ships instead take a ‘running start’ — one which would introduce a directional bias that then serves to ensure the craft warps off forward, rather than in ‘reverse’.

‘In this modified concept of operations, the spacecraft departs Earth and establishes an initial subluminal velocity, then initiates the field,’ he wrote.

‘When active, the [warp] field’s boost acts on the initial velocity as a scalar multiplier resulting in a much higher apparent speed.’ 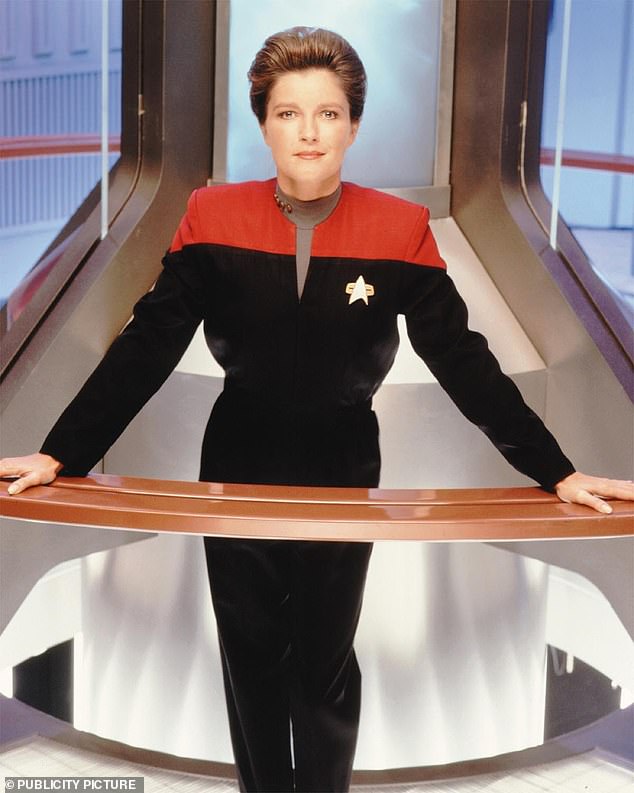 While Dr White has calculated that thickening the ‘walls’ of a warp bubble might lower the energy requirements of a warp drive, such might still prove prohibitive to implement in reality. Pictured, Kate Mulgrew’s Captain Janeway stands in front of the matter-antimatter warp core that powered the USS Voyager’s warp nacelles in the Star Trek franchise

Two more problems could impede the real-world development of a warp-drive, however, which is that the Alcubierre drive would need to create an area of space with a negative energy density — or a negative amount of energy in that area.

Physicists are unsure whether this is even possible — although such would be consistent with some hypotheses, such as the so-called ‘quantum field theory’.

Furthermore, while Dr White has calculated that thickening the ‘walls’ of a warp bubble might lower the energy requirements of a warp drive, such might still prove prohibitive to implement in reality.

Dr White, nevertheless, is hopeful that these obstacles might eventually be overcome as well.

‘The idea of a warp drive may have some fruitful domestic applications “subluminally”, allowing it to be matured before it is engaged as a true interstellar drive system,’ he wrote.

The full findings of the paper were published on the NASA website.