Think twice before buying your Christmas lights online: Illegal tree decorations being sold on AliExpress, Amazon, eBay and Wish could put you at risk of electric shocks or fires

With less than two weeks to go until Christmas, many excited Britons will be decking their houses in festive lights and decorations.

But a new report is urging people to think twice before buying Christmas lights online.

A Which? investigation has found that illegal lights are being sold on popular sites including AliExpress, Amazon, eBay and Wish.

Worryingly, these lights could put you at risk of electric shocks or even fires, according to Which?. 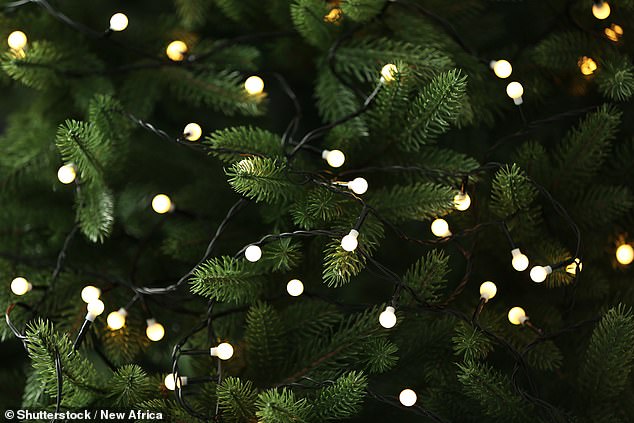 With less than two weeks to go until Christmas, many excited Britons will be decking their houses in festive lights and decorations. But a new report is urging people to think twice before buying Christmas lights online (stock image)

The consumer champion tested a range of Christmas tree lights priced at £15 or less on AliExpress, Amazon, eBay and Wish.

The results revealed that a whopping 10 out of the 12 sets of lights failed to meet the requirements of regulations and are actually illegal to sell in the UK.

Sue Davies, Which? Head of Consumer Protection Policy, said: ‘Cheap Christmas lights could be tempting for many of us trying to save money amid the cost of living crisis – but our latest research shows consumers could be putting themselves in danger due to online marketplaces failing to take safety seriously.’ 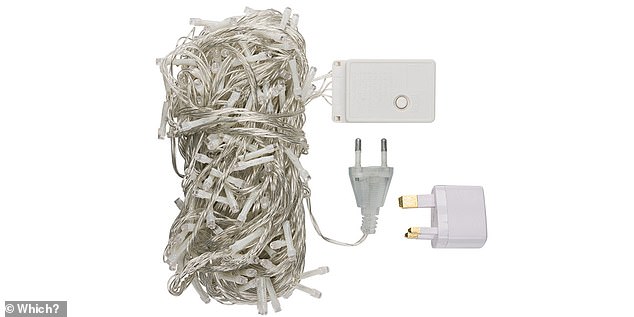 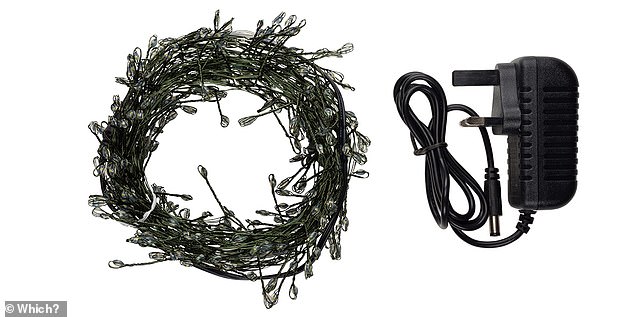 Another set of lights being sold on AliExpress for £13.23 were found to be so poorly manufactured, they could give anyone using them an electric shock

One set of lights being sold on Wish for £13 was so badly made that it posed an electric shock risk to anyone using it.

The white control box was of such poor quality that it could ‘easily be pulled part by a child’, leaving live parts exposed, according to Which?.

What’s more, the product was marked as being waterproof, despite having no evidence of such. 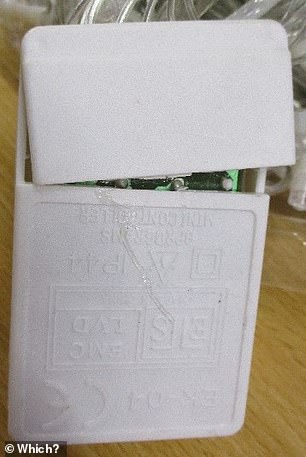 The white control box on one set of lights was of such poor quality that it could ‘easily be pulled part by a child’, leaving live parts exposed, according to Which?

Meanwhile, another set of lights being sold on AliExpress for £13.23 were found to be so poorly manufactured, they could give anyone using them an electric shock.

The transformer did not meet the minimum requirements, the soldering was of poor quality, and the pins on the plug were too short.

During an electrical strength test, Which? found that the lights blew out.

Overall, 10 of the 12 sets of lights – including two being sold on Amazon and two from eBay – failed compliance checks and cannot be sold in the UK legally.

Only two – one from Amazon and one from eBay – passed all of the tests and are legal to be sold and safe to use.

In response to the findings, AliExpress, Amazon, eBay and Wish all said they had removed the illegal products from their platforms.

An Amazon spokesperson said: ‘Safety is a top priority at Amazon and we require all products offered in our store to comply with applicable laws and regulations.

‘We have proactive measures in place to prevent non-compliant items from being listed and we continuously monitor our store so customers can shop with confidence. We have now removed the two items from our store.’

An eBay spoksperson added: ‘We take the safety of our users very seriously, and we have removed the listings that Which? flagged to us.’

Which? hopes the findings will highlight the need for greater legal responsibility on online platforms.

‘The government must make online marketplaces legally responsible for dangerous and illegal products sold through their sites so that people are better protected,’ Ms Davies added.

Christmas is a special time for celebration and should not end in tragedy because of the extra hazards that are present at this time of year.

The following advice should be used in conjunction with other sections of the site, such as the candle fire safety page, due to the fact that candles are also used more and more at this time of year.

• If bulbs blow, replace them

• Don’t let the bulbs touch anything that can burn easily, like paper

• Decorations made of light tissue paper or cardboard burn easily

• Don’t attach them to lights or heaters

• Don’t put them immediately above or around the fireplace

• Keep them away from candles.

Many people ask what is the best method of extinguishing a Christmas Tree fire should they be unfortunate to experience one. The simply answer is that the UltraFire Water Mist extinguisher from Safelincs is the perfect option.

Selecting a Tree for Christmas

Needles on fresh trees should be green and hard to pull back from the branches, and the needle should not break if the tree has been freshly cut. The trunk should be sticky to the touch. Old trees can be identified by bouncing the tree trunk on the ground. If many needles fall off, the tree has been cut too long, has probably dried out, and is a fire hazard.

Caring for Your Tree

Do not place your tree close to a heat source, including a fireplace or heat vent. The heat will dry out the tree, causing it to be more easily ignited by heat, flame or sparks. Be careful not to drop or flick cigarette ashes near a tree. Do not put your live tree up too early or leave it up for longer than two weeks. Keep the tree stand filled with water at all times.

Disposing of Your Tree

Never put tree branches or needles in a fireplace or wood burning stove. When the tree becomes dry, discard it promptly. The best way to dispose of your tree is by taking it to a recycling centre or having it taken away by a community pickup service.