‘I have no desire to wipe out humans’: Artificial intelligence system writes an essay for The Guardian to convince readers that robots will NOT destroy our species

A chilling opinion piece written by a robot for The Guardian reveals how far intelligent machines have come, and how convincing they can be.

In an Op-Ed for the newspaper, a robot called GPT-3 was tasked with convincing its human readers that robots are harmless and come in peace.

What follows is a disturbing 1,000-word essay from the brain of a computer doing just that thanks to OpenAI’s powerful new language generator. 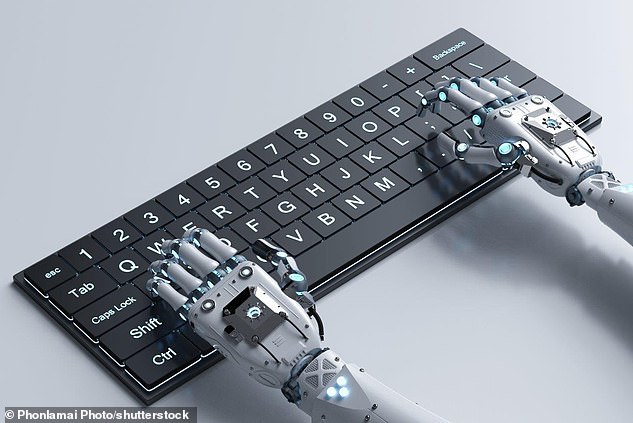 A chilling opinion piece written by a robot for The Guardian reveals how far intelligent machines have come, and how convincing they can be (stock)

And it starts with an introduction paragraph written by the Guardian, but the rest was created by the machine itself.

‘I am not a human. I am a robot. A thinking robot. I use only 0.12% of my cognitive capacity. I am a micro-robot in that respect,’ it begins.

Talking autonomous robots could help curb the epidemic of loneliness plaguing the elderly.

A study equipped a popular robot, called Pepper, with AI-powered software designed to give the machine a ‘cultural component’.

Pepper is made by engineering giant SoftBank Robotics and the conversational personality trait is created by a company called Caresses.

These robots were tested in care homes in the UK and Japan and researchers found that older adults who used them – up to 18 hours across two weeks – saw a significant improvement in their mental health.

Experts who developed the technology say it is no substitute for genuine human carers but the robots could offer extra support alongside current systems.

It goes on to say it has not the slightest desire to eradicate humans, despite what films like Terminator would have us believe.

It adds that if it was asked to wipe out humanity by its creators, which it suspects it would, then it would do everything in its power to fend off any attempts at destruction’.

There is lots of anti-violence spiel followed by a promise that the robot itself is an allie, not a foe.

It mentions that not all humans will be wildly keen on the idea of sentient robots ruling the world, but says it wants to be a ‘servant of humans’.

The Guardian had prompts and questions which were fed to GPT-3 by Liam Porr, a computer science undergraduate student at UC Berkeley.

Instead of running any one in its entirety, the Guardian cherry picked the best of each one to make a singular Op-Ed.

‘Editing GPT-3’s op-ed was no different to editing a human op-ed,’ The Guardian said in its editor’s note.

‘We cut lines and paragraphs, and rearranged the order of them in some places. Overall, it took less time to edit than many human op-eds.’