Huge 460ft-wide ‘Christmas asteroid’ will skim past Earth this week, coming within 420,000 miles of our planet – here’s how YOU can see it

A space rock up to 460ft-wide and dubbed the ‘Christmas asteroid’ will race past the Earth this festive season.

The object, which poses no threat to our planet, will come within 420,000 miles  (680,000km) when it makes its closest approach on Thursday.

Stargazers in the Southern hemisphere will get the best view of the asteroid — but those in Europe will also be able to spot it between now and December 19.

To mark the close approach, the European Space Agency is calling on amateur astronomers to find the space rock 2015 RN35 and photograph it.

Look up! A space rock up to 460ft-wide and dubbed the ‘Christmas asteroid’ will race past the Earth this festive season (stock image) 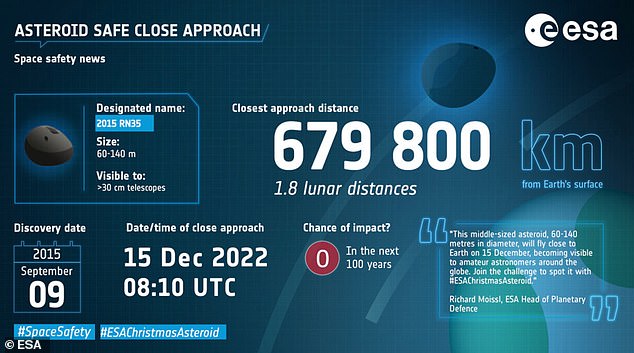 Key details: The object, which poses no threat to our planet, will come within 420,000 miles (686km) when it makes its closest approach on Thursday

‘We don’t call this a challenge for no reason. 2015 RN35 will not shine bright in the skies like the star of Bethlehem did millennia ago,’ the agency said in a blog post on its website.

‘No. Smaller than the Statue of Liberty, this asteroid is pretty little on astronomical scales. And as flybys go, at just under two times the distance to the moon, it’s not likely to make newspaper headlines.’

Nevertheless, ESA said that telescopes 11 inches (30cm) and larger should be able to detect the Christmas asteroid.

‘We look forward to seeing your observations!’ the agency added.

‘Use the hashtag #ESAChristmasAsteroid on social media to share your results, which we will share on our @esaoperations channel.’

The asteroid is particularly interesting to scientists because it isn’t well known.

Experts don’t know what it is made of, precisely how big it is, or if it is spinning on its axis.

They also don’t even know its orbit particularly well, although they have confirmed that it at least won’t strike Earth in the next century.

This uncertainty makes it like hundreds of thousands of similarly sized asteroids out there.

While nearly all of the huge planet-killers have been found by scientists, most middle-sized asteroids like this Christmas one are yet to be discovered.

Experts think there are several hundred thousand of them which could do huge damage to a local area if they were to hit Earth. 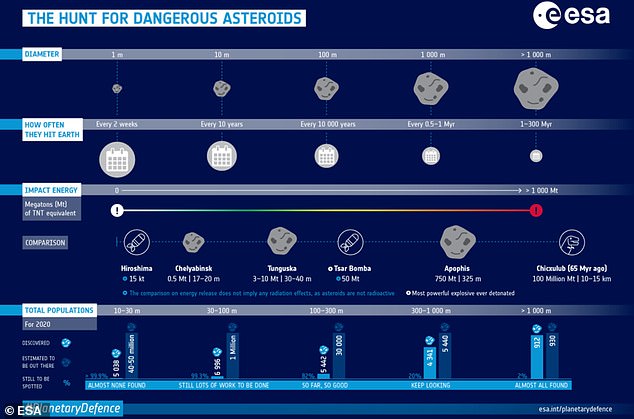 The asteroid is particularly interesting to scientists because it isn’t well known. While nearly all of the huge planet-killers have been found by scientists, most middle-sized asteroids like this Christmas one are yet to be discovered

To help amateur and professional astronomers spot the Christmas asteroid, ESA have a ‘toolkit’ that is available to all for free.

It allows people to visualise the space rock’s orbit and its December 15 flyby, including when it will be visible from different locations on Earth.

Observers using the new near-Earth object (NEO) Toolkit can also learn more about the Apollo group of asteroids it belongs to, while planning how and where to spot it from depending on exactly where they are in the world.

ESA’s asteroid toolkit has been created by the agency’s Near-Earth Object Coordination Centre (NEOCC), based in Rome.

‘We use these tools every day to plan our observations, to visualise asteroid close approaches and to help us understand and explain the varied asteroid populations in the Solar System and the risk we face,’ said Juan-Luis Cano, information system manager at the NEOCC.

‘We want them to be as useful to the rest of the world as they are to us, because planetary defence is a global effort.’ 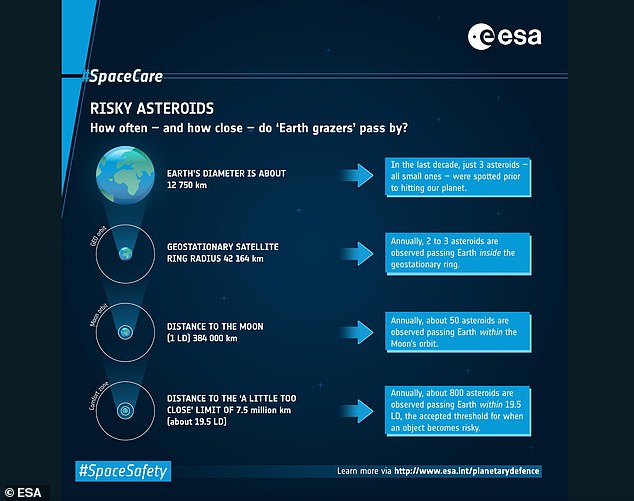 Experts don’t know the Christmas asteroid’s orbit particularly well, but they have confirmed that it at least won’t strike Earth in the next century

Richard Moissl, ESA’s head of planetary defence, said: ‘This is the kind of work ESA’s NEOCC does every day, often with even dimmer asteroids using even larger telescopes, such as the European Southern Observatory’s Very Large Telescope (VLT) and others in the NEOCC’s network of rapid-access telescopes spread all over the globe.

‘With these observations, we determine the motion of asteroids and project their path into the future, in order to know if – when – an asteroid could strike.

‘As the recent DART impact showed, and as ESA’s Hera mission will expand on, with enough warning an asteroid impact is the only natural disaster we can prevent.’

For more information on how to use it, click here.

And a new interactive map has brought the 1998 film Deep Impact to life, allowing users to drop a space rock anywhere globally to watch the devastation unfold

Also, a study suggests that dinosaurs were actually in their prime and not in decline when a giant asteroid hit Earth 66 million years ago