A mysterious black hole surrounded by a thin ‘accretion’ disk of gases and other cosmic debris that astronomers claim ‘shouldn’t exist’ has been discovered at the heart of a spiral galaxy.

NGC 3147, found around 130 million light-years away in the Draco constellation, was uncovered by scientists using the Hubble Space Telescope.

The supermassive black hole, which weighs roughly 250 million times more than the sun, shouldn’t have a disk of matter surrounding it, according to Einstein’s theories of relativity.

That’s because NGC 3147’s black hole is currently ‘starving’, due to a lack of material to feed on in the region, and starving black holes don’t usually have an accretion disk around them, experts say.

Instead, light given off by the object at the centre of NGC 3147 mimics the behaviour of a supermassive black hole at the centres of much more active galaxies. 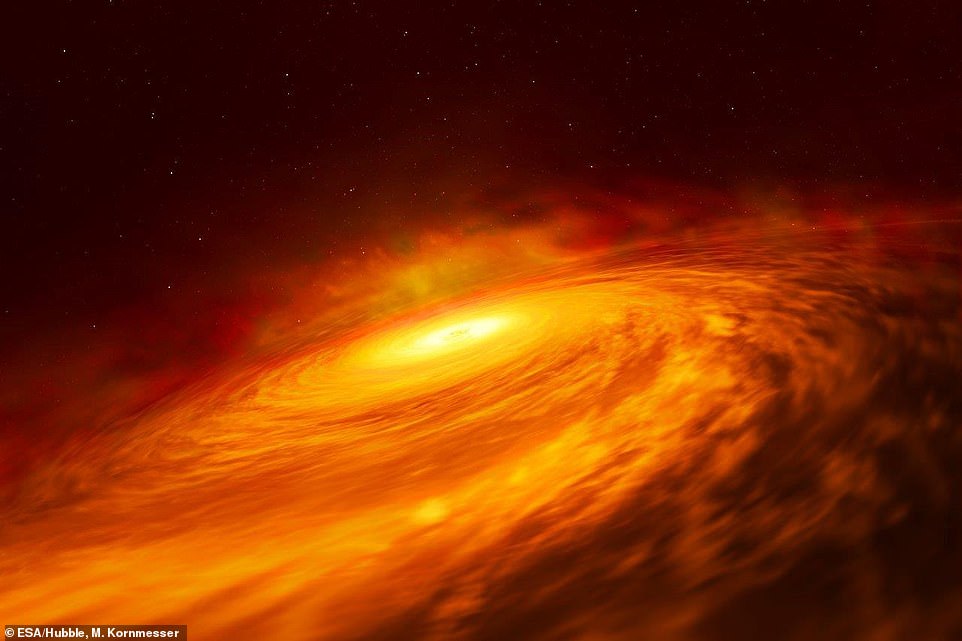 A mysterious black hole surrounded by a thin ‘accretion’ disk of gases and other cosmic debris that astronomers claim ‘shouldn’t exist’ has been discovered at the heart of a spiral galaxy. Pictured: An artist’s impression of the accretion disk swirling around the supermasive black hole

Galaxy NGC 3147 galaxy is relatively close by, at a distance of roughly 130 million light-years. It can be found in the constellation of Draco, The Dragon.

The graceful, winding arms of the majestic galaxy appear like a grand spiral staircase sweeping through space.  They are actually long lanes of young blue stars, pinkish nebulae, and dust in silhouette.

The beauty of the galaxy belies the fact that at its very centre is a malnourished black hole.  It is surrounded by a thin, compact disk of stars, gas, and dust that have been caught up in a gravitational maelstrom.

The black hole’s gravity is so intense that anything that ventures near it gets swept up in the disk.

The disk is so deeply embedded in the black hole’s intense gravitational field that the light from the gas disk is modified, according to Einstein’s theories of relativity.

This has provided astronomers with a unique glimpse at the dynamic processes at work close to a black hole.

An international team of researchers, including experts from the University of California, Santa Barbara, and Johns Hopkins University, made the finding.

The disk of material circling the black hole offers a unique opportunity to test Albert Einstein’s theories of relativity.

It is so deeply embedded in the black hole’s intense gravitational field that the light emitted from the gas disk is modified, according to Einstein’s theories of relativity.

This has provided astronomers with a unique glimpse at the dynamic processes at work close to a black hole, researchers say.

‘This is an intriguing peek at a disc very close to a black hole, so close that the velocities and the intensity of the gravitational pull are affecting how we see the photons of light,’ said the study’s first author, Stefano Bianchi, of the University of Roma Tre in Italy.

‘The type of disc we see is a scaled-down quasar that we did not expect to exist.

In order to study the matter swirling deep inside this disc, the researchers used the Hubble Space Telescope Imaging Spectrograph (STIS) instrument.

This diagnostic tool divides the light from an object into its many individual wavelengths to determine the object’s speed, temperature, and other characteristics at very high precision.

STIS was integral to effectively observing the low-luminosity region around the black hole, blocking out the galaxy’s brilliant light.

The disc’s material was measured by Hubble to be whirling around the black hole at more than 10 per cent of the speed of light.

At such extreme velocities, the gas appears to brighten as it travels toward Earth on one side, and dims as it speeds away from our planet on the other. This effect is known as relativistic beaming.

Hubble’s observations also show that the gas is embedded so deep in a gravitational well that light is struggling to escape, and therefore appears stretched to redder wavelengths.

The astronomers initially selected this galaxy to validate accepted models about lower-luminosity active galaxies: those with malnourished black holes.

These models predict that discs of material should form when ample amounts of gas are trapped by a black hole’s strong gravitational pull, subsequently emitting lots of light and producing a brilliant beacon called a quasar.

‘We’ve never seen the effects of both general and special relativity in visible light with this much clarity,’ said team member Marco Chiaberge of AURA for ESA, STScI and Johns Hopkins University.

The full findings of the study were published in the journal Monthly Notices of the Royal Astronomical Society. 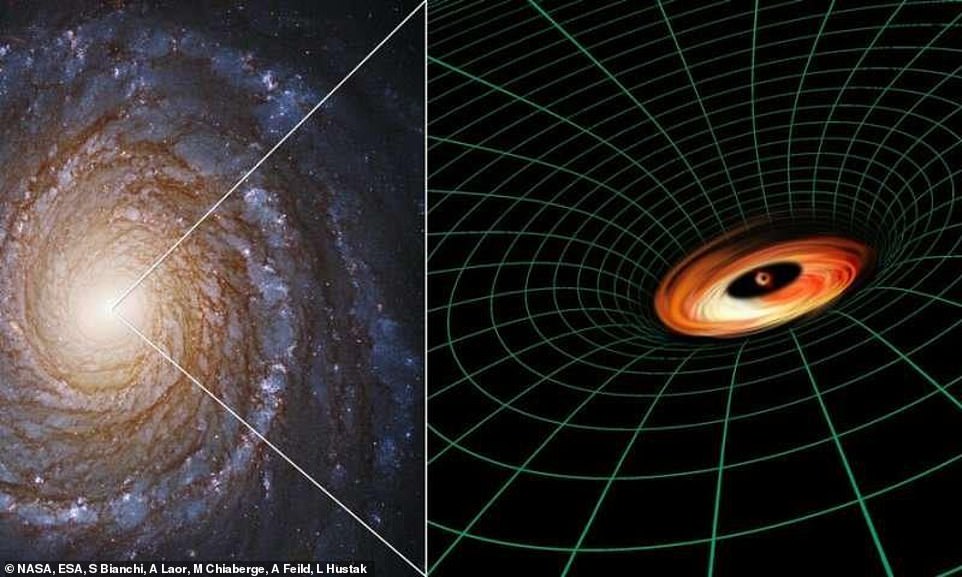 Light given off by the object (artists’ impression, right) at the centre of NGC 3147 (left) mimics the behaviour of a supermassive black hole at the centres of much more active galaxies