The moon’s surface is pockmarked with craters, the relics of violent impacts over cosmic time. A few of the largest are visible to the naked eye, and a backyard telescope reveals hundreds more. But turn astronomical observatories or even a space probe on our nearest celestial neighbor, and suddenly millions appear.

Bettina Forget, an artist and researcher at Concordia University in Montreal, has been drawing lunar craters for years. Ms. Forget is an amateur astronomer, and the practice combines her interests in art and science. “I come from a family of artists,” she said. “I had to fight for a chemistry set.”

Moon craters are named, according to convention, for scientists, engineers and explorers. Some that Ms. Forget draws have familiar names: Newton, Copernicus, Einstein. But many do not. Drawing craters with unfamiliar names prompted Ms. Forget to wonder: Who were these people? And how many were women?

“Once this question embeds itself in your mind, then you’ve got to know,” she said.

Ms. Forget pored over records of the International Astronomical Union, the organization charged with awarding official names to moon craters and other features on worlds around the solar system. She started underlining craters named for women.

“There was not much to underline,” Ms. Forget said.

Having so few moon craters named for women makes a powerful statement, she said. “It creates an atmosphere where you think women aren’t contributing.” 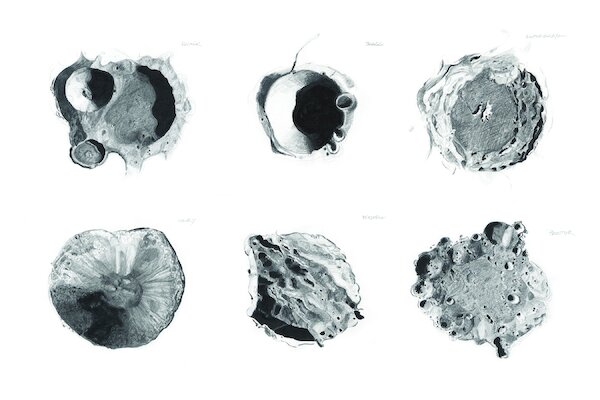 In 2016, Ms. Forget embarked on a project called “Women With Impact,” drawing each crater named for a woman. Ms. Forget draws in a large notebook using graphite for detailing and black acrylic paint. She captures the likeness of craters on the near side of the moon, like Cannon and Mitchell, namesakes of 19th- and 20th-century women astronomers, by observing them with her eight-inch telescope. For craters like Resnik and Chawla, both named for women astronauts and located on the far side of the moon that’s not visible from Earth, she bases her drawings on images taken by NASA’s Lunar Reconnaissance Orbiter.

Ms. Forget has completed so far 32 drawings. The pieces, all individually framed, have been displayed at an art gallery at Bishop’s University in Sherbrooke, Quebec, and the Rio Tinto Alcan Planetarium in Montreal. “Women With Impact” is meant to highlight the underrepresentation of women in science, technology, engineering and math (STEM) fields, Ms. Forget said. “A crater is an absence of matter, a void,” she said. “That’s a parallel with a void of women in STEM.”

Working with craters in two dimensions led Ms. Forget to add a third. “I liked this idea of holding a moon crater in my hand,” she said. In 2019, she began 3-D printing models of each crater featured in “Women With Impact.” Ms. Forget is now creating an inverted version of each one, essentially a stamp that preserves the crater’s shape. “I could do an outie,” she said.

Ms. Forget is experimenting with different ways of affixing those stamps to the soles of shoes. She plans to ship the stamps to female scientists around the world and ask them to record their experiences creating their own craters in a project called “One Small Step.” As the director of the SETI Institute’s Artists in Residence program, Ms. Forget intends to first reach out to women whose work focuses on astrobiology and exoplanets.

It’s important to celebrate the contributions of living female scientists, Ms. Forget said. “The ‘Women With Impact’ series honors historical women, but ‘One Small Step’ can honor and foreground women who are active in STEM fields now,” she said.

As more moon craters are named for women, Ms. Forget plans to create additional drawings, 3-D models and stamps. She already has work to do — one crater, Easley, was named in February for the computer scientist Annie Easley.

Catherine Neish, a planetary scientist at the University of Western Ontario, proposed the name Easley to the International Astronomical Union in January. (Her husband urged her to consider not only the name of a woman but also the name of a woman of color.) Dr. Neish had successfully proposed craters Pierazzo and Tharp in 2015 for Elisabetta Pierazzo and Marie Tharp, and she was aware of the small fraction of moon craters honoring women. “I was gung ho to slowly chip away at that number,” she said.

The paucity of moon craters honoring women is both surprising and not surprising, said Kelsi N. Singer, a planetary scientist at the Southwest Research Institute. Women generally weren’t allowed to be scientists, engineers and explorers until the 20th century, she said. Because lunar craters are not typically named for living people, “there’s definitely a historical lag,” Dr. Singer said.

Women are overrepresented when it comes to the names of features on Venus and some of Uranus’s smaller moons. But those places are exceptions in the solar system. The International Astronomical Union has acknowledged this issue and is prioritizing women’s names when naming moon craters.

“We decided that if we have the choice and the chance to name a crater after a woman, we do it,” said Rita Schulz, a planetary scientist at the European Space Research and Technology Centre in the Netherlands and chair of the union’s Working Group for Planetary System Nomenclature.

Dr. Neish already has another name in mind for a moon crater. “Very few people can name craters because they don’t have a valid scientific reason for doing so,” she said. “I want to use my privilege to recognize some of these women who have come before me.”