It’s often said that about half of all missions to Mars have failed. But getting a more precise figure for successful and unsuccessful Mars shots is more complicated than it sounds.

If it was all just down to basic maths, working out the percentages of successful and unsuccessful Mars missions would be simple.

But it’s complicated by how we define success and failure.

For instance: a few years ago we learned that the British-built Beagle 2 probe – which failed to phone home after plunging through the Martian atmosphere on 25 December 2003 – had actually reached the surface intact.

Images from Nasa’s Mars Reconnaissance Orbiter suggested that one of the four spacecraft “petals”, on which the solar panels were mounted, failed to open. This prevented the deployment of its antenna – and the possibility of communication with Earth. 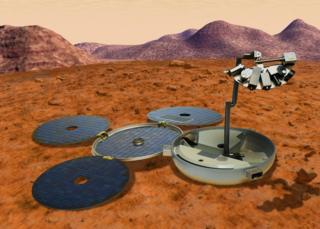 Given that other lander missions have ended up as wreckage and scorch marks on the surface, should Beagle 2 get some recognition for getting down in one piece?

Could the lander, after all these years, be considered a partial success?

Or, let’s take the USSR’s Mars-3 lander. On 2 December 1971, it became the first spacecraft to land softly on Mars. The plucky Soviet probe then started to transmit an image to jubilant ground controllers.

But after about two minutes on the Martian surface, its systems went dead. The nasty dust storm raging at the time might have been the culprit.

Some scientists think the dust may have caused an electrical discharge that damaged the lander’s communications equipment.

Despite the name Mars-3, the Soviet Union had launched Mars-1M, 2MV, 2M, 2 and 3MS before they struck “lucky”.

Then there’s another factor: what exactly do we mean by a Mars mission? In 1988, the Soviet Union launched two probes with the primary objectives of studying Mars’s two moons, Phobos and Deimos (though it was also intended that they would carry out observations of the planet).

After a command error caused Phobos-1 to fail en route to Mars, then, a few months later, Phobos-2 was lost.

Should these two probes – along with 2011’s similarly ill-fated Phobos-Grunt launch – be considered solely as missions to the moons, or should they be included on the Mars list as well? You decide.

In addition, some missions, such as Nasa’s Dawn and the European Space Agency’s Rosetta probe, made flybys of Mars en route to their “real” destinations. Should those be counted too?

It’s not difficult to see why some space-watchers have settled on saying “about half” of all missions have succeeded while half have failed – without going into more detail than that.

The poor hit rate has led to jokes about a “Mars ghoul” that swallows unfortunate planetary probes. But the reality is more mundane.

But Nasa’s Mars Climate Orbiter mission, launched in 1998, became the ultimate “metric martyr” when calculations in metric and Imperial standards got mixed up, putting it on the wrong trajectory as it was due to enter Mars orbit.

The spacecraft is thought either to have burned up in the Martian atmosphere, or to have bounced off, causing it to re-enter an orbit around the Sun.

There was a view that the mission was trying to do too much on its modest budget. And, at the time, Nasa was operating under a philosophy dubbed “Faster, Better, Cheaper”. Scientists jokingly came up with an addendum: “…you can only pick two”. In other words, the system can make the best of only two parameters, at the expense of the third.

Despite this – and a handful of other losses – the US has by far the best record of success.

All Nasa spacecraft launched to Mars since 1999 – from the Spirit, Opportunity and Curiosity rovers, to orbiting craft such as Mars Odyssey and Mars Reconnaissance Orbiter – have not only succeeded but have operated long past their prime missions.

So it is that we bid good luck to Perseverance. Here’s hoping it becomes part of that vague half of all missions that find success.