NASA on Wednesday introduced the group of astronauts it has chosen for upcoming missions to the moon.

The program, called Artemis, aims to send people back to the moon for the first time since the end of NASA’s Apollo program in 1972.

“This is the first cadre of our Artemis astronauts,” Jim Bridenstine, the NASA administrator, said during a meeting of the National Space Council at the Kennedy Space Center in Florida. “I want to be clear, there’s going to be more. ”

Vice President Mike Pence, who chairs the space council, read off the names. “I give you the heroes of the future, who will carry us back to the moon and beyond,” Mr. Pence said.

However, the astronauts will not be making any lunar trips for a while.

NASA hopes to launch its first Artemis mission next year, but that will be a crewless flight designed to test a giant rocket called the Space Launch System and the Orion capsule where the astronauts will ride.

The first flight with astronauts is scheduled for 2023. That flight is to swing past the moon but not land — a 21st century equivalent of the 1968 Apollo 8 flight. The mission after that, Artemis 3, is the one that is to land on the moon, likely somewhere near the South Pole, which is of interest because frozen water in shadowed craters has been found there.

Artemis 3 is the mission that Mr. Bridenstine has repeatedly touted as the one that will take “the next man and the first woman” to the moon. 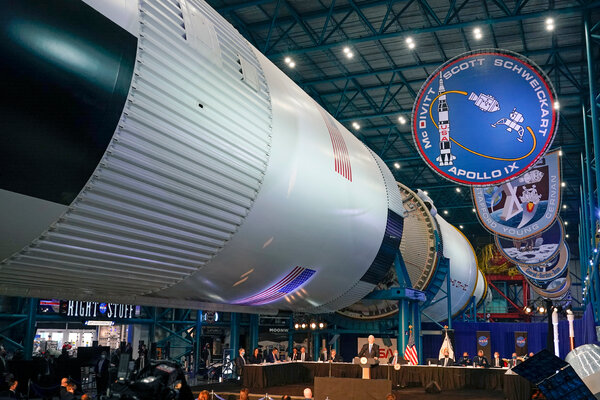 NASA has not yet revealed which astronauts will be assigned to specific missions. But some in the group have achieved a couple of distinctions in recent years. Ms. Koch and Ms. Meir participated in the first all-women spacewalk last year, and Mr. Glover became the first Black astronaut to join the crew of the International Space Station when he arrived there last month. Ms. Koch also set the record for longest consecutive stay in space — 328 days — by a woman.

The Trump administration set a goal of reaching the surface of the moon by the end of 2024. However, NASA is unlikely to meet that deadline — in addition to the technical hurdles, there is the question of cost.

Congress has provided less money than the space agency says it needs for lunar landers to be developed that quickly. For the current fiscal year, NASA asked for $3.3 billion. Congress has yet to pass a final budget, but the Senate was only willing to provide about $1 billion, and the House of Representatives offered even less, only about $600 million.

“We’re grateful for that,” said Mr. Bridenstine, who said there is support among both Democrats and Republicans for the moon program. “But ultimately, if we don’t get the $3.3 billion, it gets more and more difficult.”

President-elect Joseph R. Biden Jr. has so far said little about what he plans for NASA, but most expect a slower pace for Artemis.

During the space council meeting, officials of the Trump administration provided a recap of its space policies over the past four years: streamlining the regulations governing launching of satellites, the establishment of the Space Force that is a new branch of the military and increased attention to space debris that threatens satellites in orbit around Earth.