Giant magnetic spots on the surface of extremely hot and small stars can trigger giant flares, a study has concluded.

Researchers used the so-called Very Large Telescope in Chile to study a special kind of star found in distant stellar cluster — and found that their brightness changes.

These changes are caused by the presence of giant bright hot spots on the star’s surface that come in and out of view as the star rotates.

The spots — caused by magnetic fields — can also release powerful explosions of energy significantly more powerful than anything seen on our Sun. 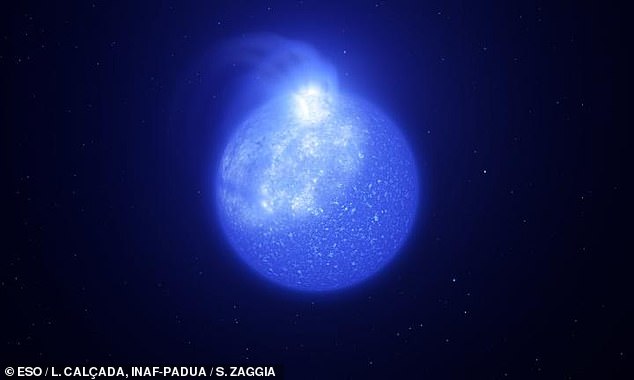 Giant spots on the surface of extremely hot and small stars can trigger giant flares, a study has concluded. Pictured, an artist’s impression of a white spot on an horizontal branch star

In their study, Yazan Momany of the Italy’s INAF Astronomical Observatory of Padua and colleagues studied a type of celestial object known as an ‘extreme horizontal branch star’ — which are four–five times hotter than the Sun at half the mass.

‘These hot and small stars are special because we know they will bypass one of the final phases in the life of a typical star and will die prematurely,” said Dr Momany.

‘In our galaxy, these peculiar hot objects are generally associated with the presence of a close companion star.’

When found in the dense clusters of stars known as ‘globular clusters’, however, the vast majority of these extreme horizontal branch stars are found alone.

When studying three different globular clusters, however, the researchers found that many of the extreme horizontal branch stars exhibited regular changes in brightness over the course of a few days to several weeks.

‘After eliminating all other scenarios, there was only one remaining possibility to explain their observed brightness variations,’ said paper author and astronomer Simone Zaggia, also of the Observatory of Padua.

‘These stars must be plagued by spots!’ he added.

Caused by magnetic fields, spots are also seen on our own Sun — although instead of being dark and relatively cool, the spots on extreme horizontal branch stars are brighter and hotter than the surrounding stellar surface.

Furthermore, the spots on these hot and small stars are much larger than those seen on our sun — covering up to a quarter of the  star’s surface — and last for decades rather than the days to months of more familiar sunspots.

It is the rotation of the stars — bringing the spots in and out of view — that cause the change in brightness that the researchers observed in the globular clusters. 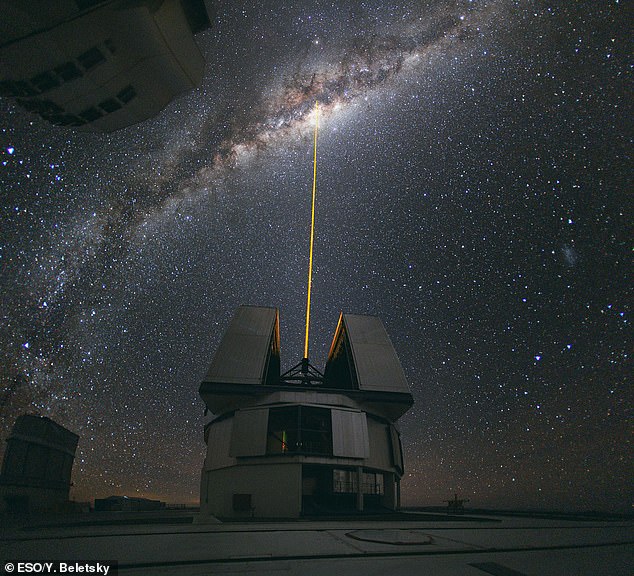 In their study, Yazan Momany of the Italy’s INAF Astronomical Observatory of Padua and colleagues studied a type of celestial object known as an ‘extreme horizontal branch star’ — which are four–five times hotter than the Sun at half the mass. Pictured, one of the four unit telescopes that make up the Very Large Telescope which the researchers used in their study

Alongside the spots, the team also found a couple of extreme horizontal branch stars that appear to fire off superflares — sudden explosions of energy.

‘They are similar to the flares we see on our own Sun, but ten million times more energetic,’ said paper author Henri Boffin of the European Southern Observatory.

‘Such behaviour was certainly not expected and highlights the importance of magnetic fields in explaining the properties of these stars.’

According to the team, the findings may help explain the origin of strong magnetic fields in many white dwarfs — the objects that represent the final stage in the life of Sun-like stars, but also show similarities to extreme horizontal branch stars.

‘Changes in brightness of all hot stars — from young Sun-like stars to old extreme horizontal branch stars and long-dead white dwarfs — could all be connected,’ said paper author David Jones of the Instituto de Astrofísica de Canarias, in Spain,

‘These objects can thus be understood as collectively suffering from magnetic spots on their surfaces.’

The full findings of the study were published in the journal Nature Astronomy.

WHAT IS THE VERY LARGE TELESCOPE?

The European Southern observatory (ESO) built the most powerful telescope ever made in the Atacama Desert of northern Chile.

It also observed the afterglow of the furthest known Gamma Ray Burst,