Oh snap! Researchers discover two new species of giant dwarf crocodiles the length of TWO FRIDGES that may have preyed on human ancestors up to 18 million years ago

Researchers have discovered two new species of ‘giant’ crocodile that roamed the planet up to 18 million years ago – and may have preyed on our human ancestors.

Modern dwarf crocodiles rarely exceed four or five feet in length, but the giant dwarf crocodiles are thought to have grown up to 12 feet – roughly the equivalent of two fridges placed end-to-end.

Scientists from the University of Iowa have been examining a number of ancient crocodile specimens at the Museums of Kenya, in Nairobi since 2007.

Professor Christopher Brochu, the study’s corresponding author, said: ‘These were the biggest predators our ancestors faced.’ 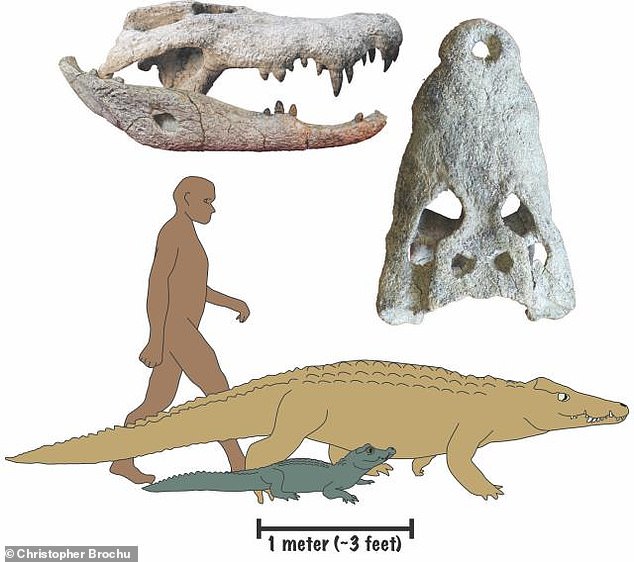 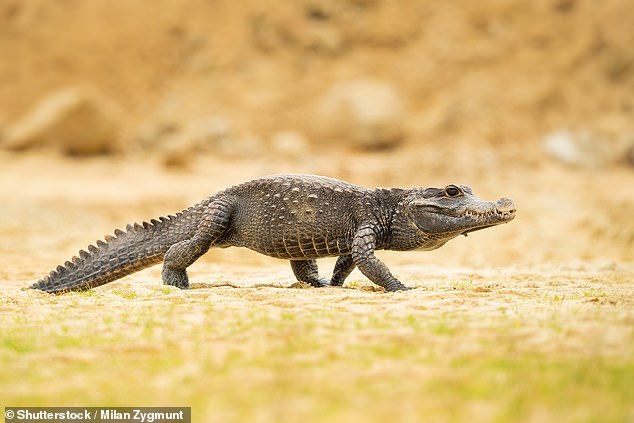 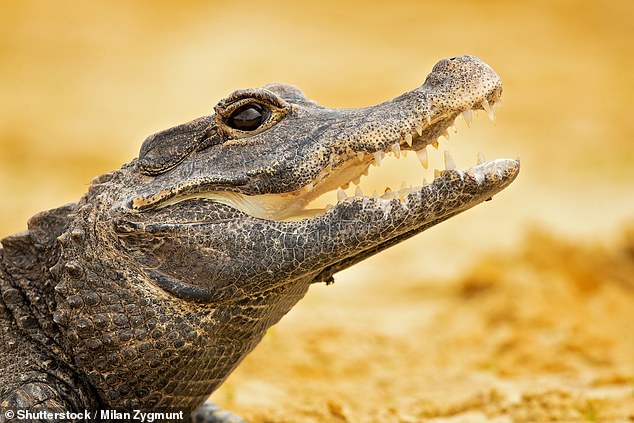 Professor Christopher Brochu said of the ancient crocodiles: ‘They had what looked like this big grin that made them look really happy, but they would bite your face off if you gave them the chance’. Image shows modern African dwarf crocodile

The Dwarf crocodile, or Osteolaemus tetraspis, is a small crocodile with short, blunt muzzle and black and yellow body.

They are found in central and west Africa, and live up to 75 years.

Modern dwarf crocodiles rarely exceed four or five feet in length, and grow up to 32 kg.

However the giant dwarf crocodiles are thought to have grown up to 12 feet.

The nostrils of giant dwarf crocodiles opened somewhat up and to the front, not straight upward as they do in modern crocodiles. 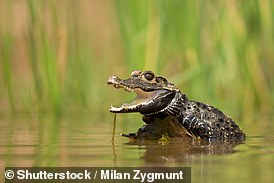 The researchers announced the discovery of the Kinyang mabokoensis and Kinyang tchernovi earlier this month in The Anatomical Record.

‘They were opportunistic predators, just as crocodiles are today,’ said Professor Brochu explained.

‘It would have been downright perilous for ancient humans to head down to the river for a drink.

‘They had what looked like this big grin that made them look really happy, but they would bite your face off if you gave them the chance.’

The Kinyang species would have lived in the East Africa Rift valley, parts of present-day Kenya, in the early to middle Miocene period.

This was before humans had diversified from ancient great apes, which occurred between 8 and 4 million years ago.

Old World anthropoids, or Old World monkeys, may have been targets for the giant dwarf crocodiles at the time.

They are related closely to the dwarf crocodiles currently found in central and west Africa, with short, deep snouts and large, conical teeth.

However their nostrils opened somewhat up and to the front, not straight upward as they do in modern crocodiles.

They spent most of their time in the forest, rather than in the water, waiting to ambush prey.

The new species discovery comes after analysis of the skull of a Kinyang specimen.

The researchers found evidence that the huge reptiles were active for about three million years, while their region in east Africa was largely blanketed by forests.

However, at the end of a particularly warm period called the Miocene Climatic Optimum about 15 million years ago, both species seemed to mysteriously die out. 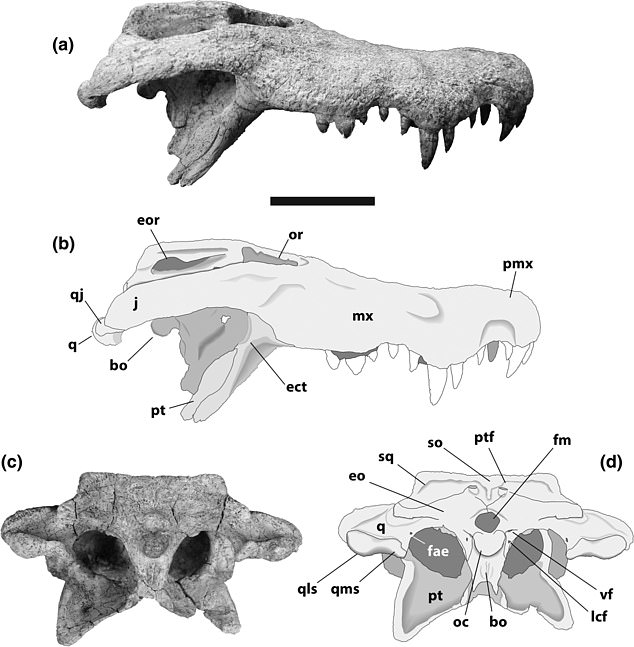 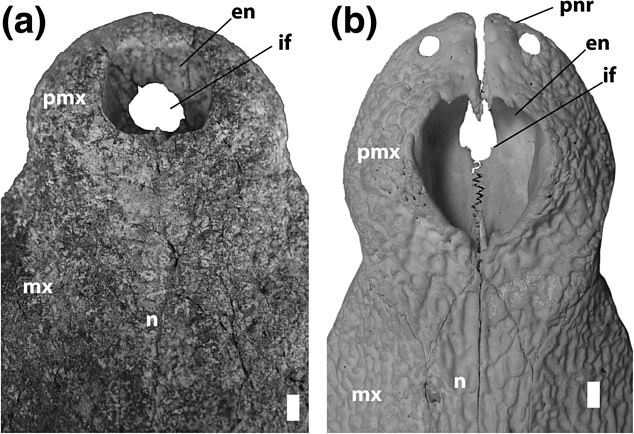 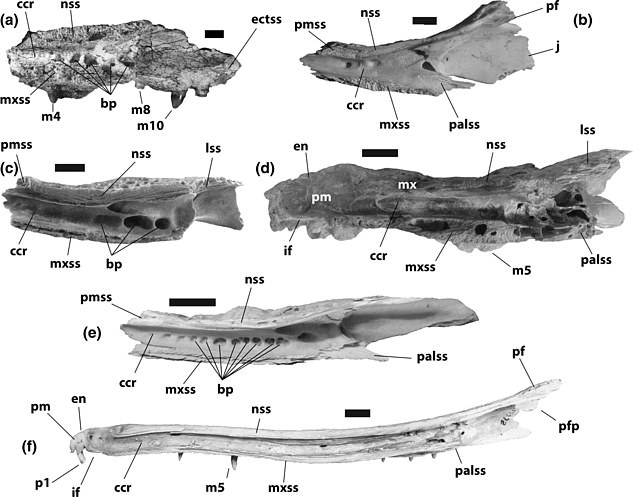 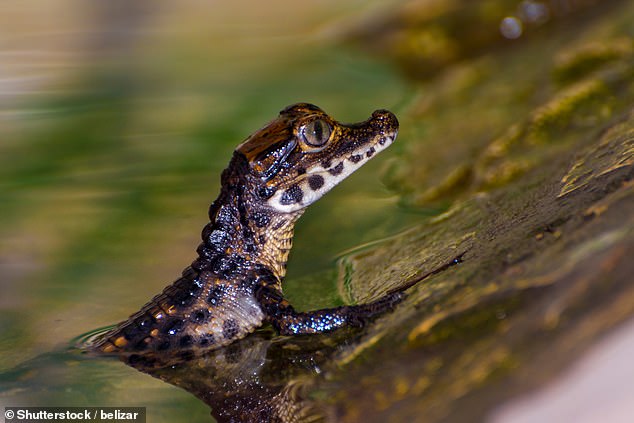 HUMANS IN THE EARLY MIOCENE PERIOD

The Miocene geological period — which spanned from 23–5 million years ago — is when the evolutionary path that led to the hominoids, or apes, became distinct.

Approximately 100 species of apes lived during this time, ranging throughout Africa, Asia and Europe and varying widely in size, diet, and anatomy.

Fossils at 20 million years ago include fragments attributed to Victoriapithecus, the earliest Old World monkey.

Due to limited fossil evidence it is unclear which ape or apes contributed to the modern hominid, but it indicates it lived between 7 and 8 million years ago

Hominids are the primate group consisting of all modern and extinct Great Apes, including modern humans, chimpanzees, gorillas and orangutans.

The first hominins – bipedal apes of the human lineage – appeared in Africa at the very end of the Miocene around six million years ago.

The chimpanzee–human divergence is thought to have occurred between eight and four million years ago.

Professor Brochu thinks that the change in climate led to less rainfall in the region, resulting in the lush forests being replaced with grasslands and mixed savanna woodlands.

The team believes the crocodiles used the forests for hunting and nesting, so the drier landscape made it harder for them to survive.

Further research is required to confirm this hypothesis, as the researchers were unable to determine precisely when the animals became extinct.

Additionally, there is a gap in the fossil record between Kinyang and other crocodile lineages that came on to the scene beginning about 7 million years ago.

The new arrivals included relatives of the Nile crocodile currently found in Kenya.

‘Loss of habitat may have prompted a major change in the crocodiles found in the area.

‘These same environmental changes have been linked to the rise of the larger bipedal primates that gave rise to modern humans.’

Modern dwarf crocodiles, along with six other species, have been found to be able to gallop at up to 11mph .

The reptiles use the extreme gait because it allows them to accelerate quickly and escape from danger.

But the closely-related alligators and caimans are restricted to a mere trot due to small differences in their body shape that stops them from galloping.

Experts from the Royal Veterinary College believe they didn’t evolve the ability to gallop because they would rather stand and fight instead of fleeing from danger.