Scientists have discovered the world’s largest known bacteria, reaching up to one centimetre (0.4-inches) in length.

The species, called Thiomargarita magnifica, was discovered on sunken leaves in the waters of a mangrove swamp in Guadeloupe, Lesser Antilles in the Caribbean.

It appears as thin white filaments like vermicelli pasta, and contains microscopic sulphur granules that scatter light, giving it a pearly gleam.

The ‘giant’ organism is thousands of times larger than most bacteria and can therefore be seen by the naked eye.

Thiomargarita magnifica ‘challenges the prevailing view of bacterial cell size’ and the assumption that microbes are only visible under a microscope. 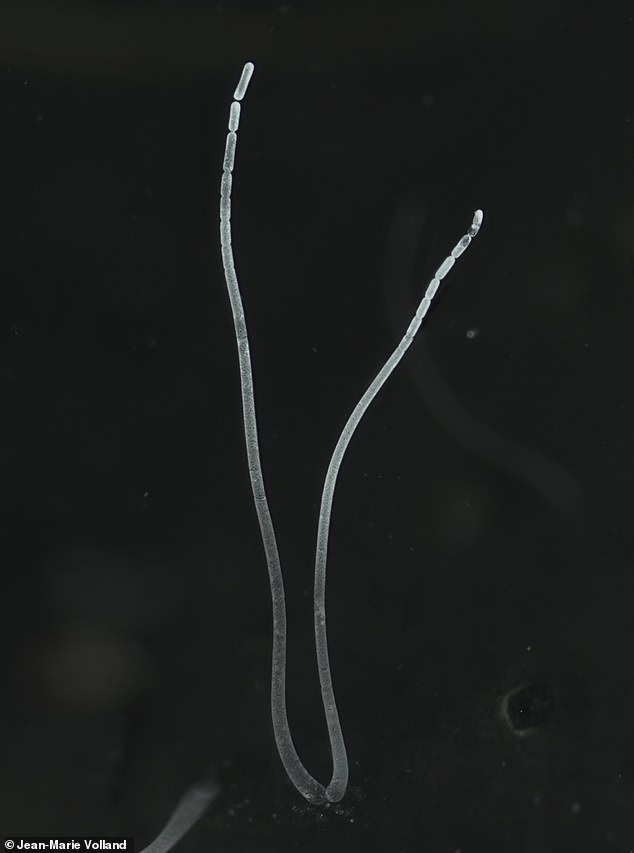 Filaments of Thiomargarita magnifica. The ‘giant’ organism is larger than all other known giant bacteria by around 50 times and can therefore be seen by the naked eye 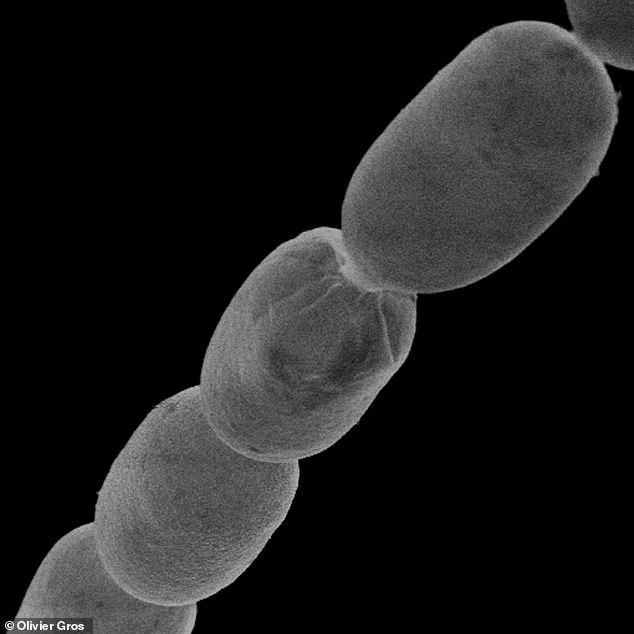 Size: Up to one centimetre (0.4-inch) Domain: Bacteria

‘To put it into context, it would be like a human encountering another human as tall as Mount Everest.

‘We know that it’s growing and thriving on top of the sediment of mangrove ecosystem in the Caribbean.

‘In terms of metabolism, it does chemosynthesis, which is a process analogous to photosynthesis for plants.’

The organism was originally discovered in 2009 by Olivier Gros from the University of the French Antilles at Pointe-à-Pitre, Guadeloupe.

But the find initially did not attract much attention – due to its size, Gros at the time thought it was a fungus.

It took Gros and other researchers five years to find out that the species is actually a bacterium.

The find was described in a pre-print paper in February and has now finally been published in the journal Science.

‘When I saw them, I thought, “strange”,’ said Gros. ‘In the beginning I thought it was just something curious, some white filaments that needed to be attached to something in the sediment like a leaf.’ 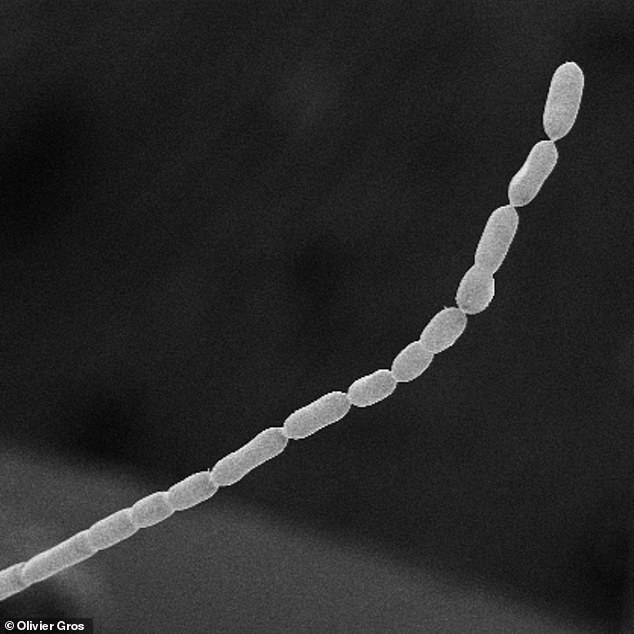 Bacteria are found almost everywhere on Earth and are vital to the planet’s ecosystems.

Some species can live under extreme conditions of temperature and pressure.

The human body is full of bacteria, and in fact is estimated to contain more bacterial cells than human cells.

Most bacteria in the body are harmless, and some are even helpful. A relatively small number of species cause disease.

Volland took on the challenge to show the organism in three dimensions and at relatively high magnification.

By definition, bacteria are microscopic single-celled organisms lacking a distinct nucleus. Bacteria are prokaryotes, because they do not have a membrane-bound nucleus.

T. magnifica is a sulphur-oxidising prokaryote, meaning it derives energy from the oxidation of sulphur compounds.

Large sulphur bacteria have been shown to be hot spots for symbionts – an organism living in symbiosis with another.

Silvina Gonzalez-Rizzo, an associate professor of molecular biology at the Université des Antilles, performed gene sequencing to identify and classify the prokaryote.

‘I thought they were eukaryotes; I didn’t think they were bacteria because they were so big with seemingly a lot of filaments,’ she said.

‘We realised they were unique because it looked like a single cell. The fact that they were a “macro” microbe was fascinating.

‘[We called it] magnifica because magnus in Latin means big and I think it’s gorgeous like the French word magnifique.’ 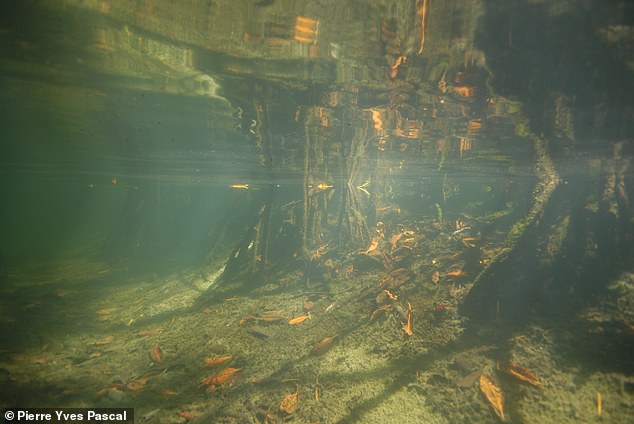 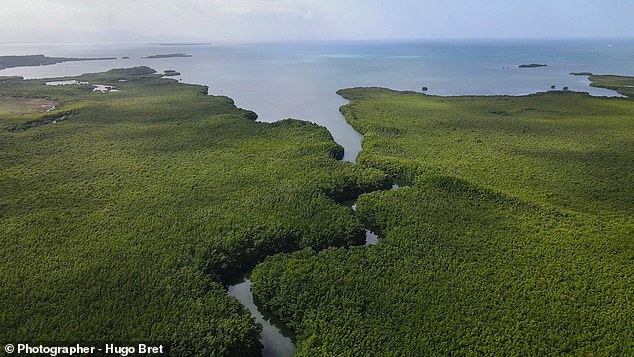 T. namibiensis, found in the ocean sediments of the continental shelf of Namibia, is said to reach up to 0.75 mm (0.03-inches).

As for why T. magnifica is so large, the researchers aren’t so sure. Bu it’s thought unlikely that T. magnifica represents the upper limit of bacterial cell size.

The authors conclude: ‘The discovery of T. magnifica suggests that large and more complex bacteria may be hiding in plain sight.’

The researchers hope cultivating the bacteria in the lab as a way to learn more about the species.

‘Bacteria are endlessly adaptable and always surprising and should never be underestimated,’ says Petra Anne Levin, a biologist at Washington University in St. Louis, in a related Perspective.

‘Why these organisms need to be so large is another equally intriguing, if challenging, issue.’

Levin, who was not involved with the study, points out that bacteria are often defined as microbes – microscopic organisms.

The discovery of T. magnifica shows that this definition should be avoided, as bacteria are not defined by their size.

Scientists have taken the sharpest-ever images of living bacteria, spotlighting the outer protective layer that make some so hard to kill.

The photos reveal that Gram-negative bacteria, which have a protective outer membrane, aren’t uniformly impenetrable — they actually have stronger and weaker spots on their surfaces.

In these bacteria, the outer membrane is composed of dense networks of protein building blocks.

In between, though, are protein-free ‘patches’ of sugary chains known as glycolipids.

The tough outer membrane of Gram-negative bacteria prevents antibiotics from penetrating the cell wall, making antimicrobial resistance of bacteria like Salmonella and E. coli such a danger.