He was convinced that human beings would eventually connect with extraterrestrials, and he inspired others to share that belief. 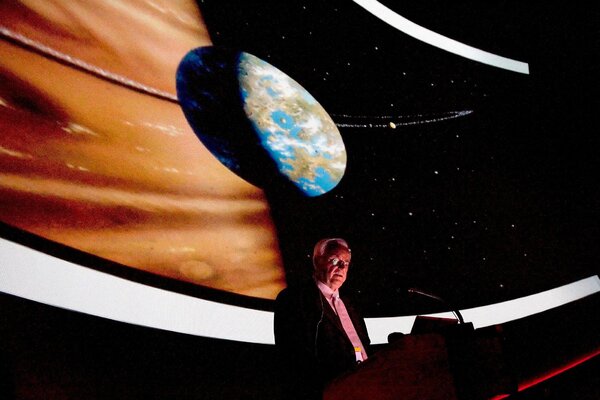 Frank Drake, who pointed a radio telescope at a pair of stars in 1960 hoping to find alien civilizations and thus kindled a continuing endeavor called the Search for Extraterrestrial Intelligence, or SETI, died on Friday at his home in Aptos, Calif. He was 92.

His death was confirmed by his daughter Nadia Drake, a science journalist, and by the University of California, Santa Cruz, where he was an emeritus professor and a former dean of science.

“Frank inspired millions of Earthlings, including me, to think about the question ‘Is Anybody Out There?’” said Dan Werthimer, a longtime SETI researcher at the University of California, Berkeley. He added, “If Earthlings ever find ET, we’ll have Frank to thank.”

Among his achievements was the development of the Drake Equation, which continues to be used to estimate the number of advanced civilizations in the galaxy.

Dr. Drake was the very embodiment of cosmic optimism. He never wavered in his belief that if humans waited long enough and searched hard enough, they could bridge the vast gaps between the stars with radio waves. In his book “Intelligent Life in Space,” published in 1962, he wrote:

“At this very minute, with almost absolute certainty, radio waves sent forth by other intelligent civilizations are falling on the earth. A telescope can be built that, pointed in the right place and tuned to the right frequency, could discover these waves. Someday, from somewhere out among the stars, will come the answers to many of the oldest, most important and most exciting questions mankind has asked.”

So far it hasn’t happened. Only last spring a promising signal picked up by a giant Chinese radio telescope proved to be electrical interference from the Earth.

Once upon a time, Dr. Drake confidently asserted that humans would come into contact with extraterrestrials in his own lifetime. In recent years, however, he acknowledged that he might not live to see contact made, emphasizing that, with 100 billion stars (and planets) in the galaxy, the search had barely begun.

Frank Donald Drake was born in Chicago on May 28, 1930, the oldest of three children. His father, Richard, was a chemical engineer, and his mother, Winnifred (Thompson) Drake, was a music teacher.

Young Frank was good enough at the accordion to play gigs at Italian weddings, recalled his youngest daughter, Leila Drake Fossek. He was always interested in chemistry and electronics as well as astronomy. He attended Cornell University on a scholarship from the Navy Reserve Officer Training Corps, graduating with a bachelor's degree in engineering physics in 1952.

In 1953, he married Elizabeth Bell, a composer, musician and music critic. They had three sons and divorced in 1976. In 1978, he married Amahl Shakhashiri, whom he had met at a meeting of the National Academy of Sciences.

She survives him along with their daughters; his sons from his first marriage, Steve, Richard and Paul; four grandchildren; and a brother, Bob. His sister, Alma Quigley, died.

After three years as the electronics officer on a Navy cruiser, the U.S.S. Albany, Dr. Drake entered Harvard’s graduate school and left with a master’s degree and Ph.D. in astronomy in 1958.

His first job out of Harvard was at the National Radio Astronomy Observatory in Green Bank, W.Va. Given the task of finding a research program for a newly assembled telescope in 1960, he reached back to a boyhood dream of alien life.

In what he called Project Ozma, after the Wizard of Oz, Dr. Drake alternately pointed the telescope at a pair of sunlike stars, Tau Ceti and Epsilon Eridani, each about 11 light-years from Earth. That telescope, known informally as the Ozmascope, is now on exhibit at Green Bank. The only signal he detected with it was from a rogue aircraft radar, but the effort drew the public’s attention.

A year later, in November 1961, 10 scientists, including luminaries like the young Carl Sagan and John Lilly, who was trying to learn to communicate with dolphins, convened at the Green Bank observatory to ponder the extraterrestrial question. (They did so secretly, fearing professional ridicule.) After Dr. Lilly’s research, they called themselves the Order of the Dolphin.

It was at Green Bank that Dr. Drake, who had planned the meeting, derived his famous equation as a way of organizing the agenda. It consists of seven factors, which range over all human astronomical knowledge and aspiration. Some are strictly empirical, like the rate at which stars are born in the Milky Way and the fraction of those stars with habitable planets. Others are impossibly mystical, like the average lifetime of a technological civilization — 1,000 to 100 million years was the guess. Multiply all the factors together and you get the putative galactic census.

In the realms in which astronomers have actually gotten new data, the old guesses of the Dolphins have held up well, said Seth Shostak, an astronomer and spokesman at the SETI Institute. NASA’s Kepler planet-hunting satellite and ground-based telescopes have verified optimistic estimates of the abundance of potentially habitable Earth-size planets, and scientists know from the Kepler mission that there could be 300 million of them in the Milky Way galaxy alone.

“These guys were either enormously lucky or amazingly prescient,” Dr. Shostak said of the Dolphins.

At the same time, scientists have discovered that life on Earth is tougher and more versatile than scientists had thought, thriving in weird places like boiling undersea vents. “There is so much evidence for lots of pathways to the origin of life,” Dr. Drake said.

After a brief stint at the Jet Propulsion Laboratory in Pasadena, Calif., he joined Cornell as a professor and later became the director of the National Astronomy and Ionosphere Center, or NAIC, whose giant 300-meter antenna in Arecibo, P. R., would become the premier SETI instrument on the planet.

In that capacity he coined in 1968 the word pulsar, for the enigmatic beeping objects being discovered in the radio sky. Dr. Drake also found a radiation belt around Jupiter and discovered that Venus’s scorching atmosphere was as thick as an ocean on Earth.

But SETI would remain his enduring love.

In 1971, NASA convened a study on how to detect extraterrestrial life that became known as Project Cyclops. Its report, which took as its keynote the passage quoted above from Dr. Drake’s book “Intelligent Life in Space,” called for an array of 1,000 radio telescopes, each 100 meters in diameter, to search space out to 1,000 light-years. But its projected $10 billion price tag earned it one of Senator William Proxmire’s “Golden Fleece” awards for government budgetary waste. The project was never built, but the report became a bible for astronomers interested in extraterrestrial affairs.

“For the very first time, we had technology where we could do an experiment instead of asking priests and philosophers,” Jill Tarter, who read the report when she was a graduate student and who has devoted her life to the search for extraterrestrial intelligence as a result, said in an interview with The New York Times in 2012.

Dr. Drake continued to promote an expansive view of life in the cosmos. In 1972, he and Dr. Sagan and Dr. Sagan’s wife at the time, Linda Salzman Sagan, designed a plaque for the forthcoming Pioneer 10 and Pioneer 11 missions that would make those robotic probes the first spacecraft to leave the solar system.

The plaque portrayed a pair of nude humans and a map of where the spacecraft had come from. A few years later, Dr. Drake and Dr. Sagan and a small band of friends collaborated on the Voyager Golden Record, a 12-inch gold-plated copper disc that compiled sights and sounds of Earth and humanity and that was launched onboard the Voyager 1 and Voyager 2 spacecraft in 1977, along with a turntable on which to play it.

“Without Frank there would have been no record,” said Ann Druyan, who was part of the team. She added, “We were building a Noah’s Ark of human culture.” The Voyagers were launched in 1977 and are still going.

The message consisted of 1,679 zeros and ones. Arranged in 73 rows and 23 columns, the bits formed pictures of a stick man, the radio telescope, a DNA helix, the solar system, the numbers 1 through 10 and more. Before he sent it off, he tried out the message on his Cornell colleagues, including Dr. Sagan.

None of them could decode the whole thing.

Dr. Drake moved west to the University of California, Santa Cruz, in 1984 and also assumed the presidency of the SETI Institute, a new nonprofit organization.

In 1992, NASA hired the institute to do part of a scaled-down search called the High Resolution Microwave Survey, in which telescopes were tuned to microwave frequencies that gave signals the best chance to travel vast distances. But a year later, Congress canceled it at the behest of Senator Richard Bryan, Democrat of Nevada, who ridiculed it as a waste of taxpayer’s money.

Undaunted, Dr. Drake and his colleagues set out to raise their own money from Silicon Valley and other tech havens. They relaunched their search, now christened Project Phoenix, with the goal of examining the radio emissions of about 1,000 stars. That project petered out in the early 2000s because of the difficulty of getting telescope time, but various searches continue, notably Breakthrough Listen, sponsored by the entrepreneur and philanthropist Yuri Milner’s Breakthrough Foundation. Recently astronomers have begun to explore looking for extraterrestrial laser signals as well.

Dr. Drake retired from the university in 1996 but never from SETI. Under realistic estimates, he said in a recent interview, a search for extraterrestrial life would need to look at 10 million stars (there are at least 100 billion in the galaxy). So far, only a few thousand have been examined.

“We could be wrong,” he said, adding, “The extraterrestrials have to help us a lot” by beaming powerful beacons toward Earth.

But he remained firm in his belief that they are out there.

“Life is easy,” he said in 1997. “There are a multiplicity of possible origins. The big question is not whether it started, but which way did it start.”