Self-driving delivery vehicles may be getting closer to becoming a reality, but Ford believes there’s one leg of the process that could be further solved by robots.

The auto giant has partnered with startup Agility Robotics to create a two-legged robot called ‘Digit’ that can ferry packages to your doorstep.

It solves a problem generated by self-driving delivery vehicles, which is that if there’s no humans in the driver’s seat that can drop off a package, autonomous robots can pick up the slack.

‘It’s not always convenient for people to leave their homes to retrieve deliveries or for businesses to run their own delivery services,’ Ken Washington, chief technology officer at Ford, wrote in a blog post.

‘If we can free people up to focus less on the logistics of making deliveries, they can turn their time and effort to things that really need their attention.

‘Enter Digit, a two-legged robot designed and built by Agility Robotics to not only approximate the look of a human, but to walk like one, too,’ Washington added.

Ford’s robot is capable of lifting packages that weigh 40lbs, so it can deliver your pizza, Amazon package or groceries straight to your doorstep.

Since Digit is designed to move like a human, it’s able to walk up and down stairs, traverse uneven terrain and regain its balance even if a human bumps into the machine on a busy sidewalk.

Other delivery robots, such as those created by Starship Technologies, are fairly limited in terms of where they can deployed because they’re equipped with wheels that make it impossible to go up and down stairs.

Once the two-legged robot arrives at the delivery destination, Digit unfurls itself, picks up a package and finishes the final step in the delivery process, the auto giant noted 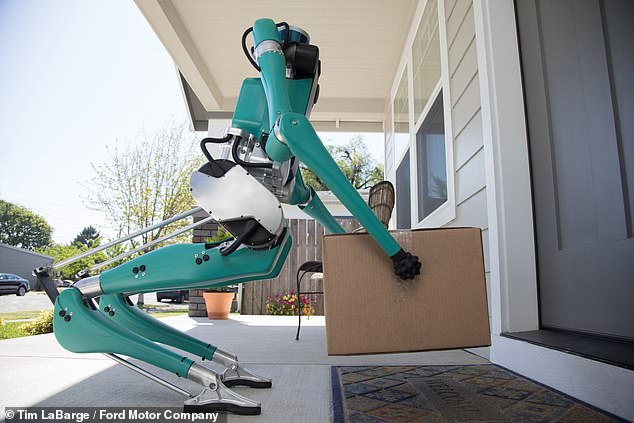 Since Digit is designed to move like a human, it’s able to walk up and down stairs, traverse uneven terrain and regain its balance even if a human bumps into the machine

Instead, Digit is able to walk upright on two legs, allowing it to navigate a wider array of environments.

Additionally, the robot can fold itself up into a compact shape so that it conveniently fits in the back of a delivery truck.

Once it arrives at the delivery destination, Digit unfurls itself, picks up a package and finishes the final step in the delivery process, Washington noted.

In order to get from the car to the door autonomously, Ford says Digit taps into data obtained by the self-driving vehicle.

Specifically, it accesses a detailed map of the surrounding environment created by the vehicle. 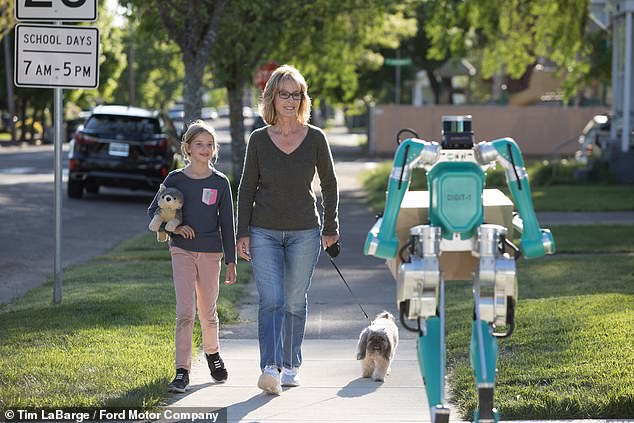 Ford’s robot is lightweight, yet still capable of lifting packages that weigh 40lbs, so it can deliver your pizza, Amazon package or groceries straight to your doorstep

In order to get from the car to the door autonomously, Ford says Digit taps into data obtained by the self-driving vehicle. It uses detailed maps created by the vehicle to navigate

Digit and the vehicle can also work together to configure a solution when it encounters obstacles in its surroundings.

‘Through our collaboration with Agility, we are striving to determine the best way for our self-driving vehicles to cooperate with Digit and understand how this new delivery method can be taken advantage of in the future,’ Washington explained.

Ford didn’t say if or when it plans to deploy Digit robots for deliveries.

However, in a February press release, Agility said it expects deliveries to begin in the beginning of 2020.

Ford isn’t the only company working on autonomous delivery robots. It’s joining a crowded field of early entrants like SoftBank-owned Boston Dynamics, as well as robotics firm ANYbotics, which unveiled its robot delivery dog at the Consumer Electronics Show earlier this year.

WHAT IS THE ANYMAL DELIVERY ROBOT?

Continental partnered with robotics company ANYbotics, known for its quadrupedal robots that can open doors and ride elevators, to develop a concept delivery robot.

In January, Continental had a demo showing just what that would look like.

A robot dog was able to jump out of the van, clamber over a garden in front of a model home and make its way up a set of stairs to the door.

From there, it slides the package off its back and onto the front porch, before ringing the fake doorbell with one of its arms.

After delivering the package, it was even able to do a little dance.

Continental believes the concept system could make last-mile delivery even more efficient in the future.

The last-mile portion of the delivery process encompasses how the package gets from the warehouse to the person’s doorstep.

While the demo went smoothly, Continental doesn’t plan to roll out the robo-delivery dogs or the driverless van concept anytime soon.