A ghostly hum has been echoing across the plains of Mars’ Jezero Crater. It’s the sound of NASA’s Ingenuity helicopter spinning its rotor blades at unearthly speeds and lifting itself away from the Martian dust. For the first time, you can hear it yourself.

NASA’s Perseverance rover, which carried Ingenuity to Mars, has recorded video of each of the helicopter’s four flights thus far. But during the chopper’s fourth flight on April 30, Perseverance’s microphone was on. It captured the sound of otherworldly flight from 262 feet away.

The dominant sound in the video, below, is the rumble of wind blowing across the open plain. But if you turn the volume up high, you’ll hear the helicopter whir as its spinning blades lift it from the ground. The sound gets loudest when Ingenuity flies across the camera’s field of view.

“This is a very good surprise,” David Mimoun, the science lead for the Perseverance rover’s microphone, said in a press release. “We had carried out tests and simulations that told us the microphone would barely pick up the sounds of the helicopter, as the Mars atmosphere damps the sound propagation strongly. We have been lucky to register the helicopter at such a distance. This recording will be a gold mine for our understanding of the Martian atmosphere.” 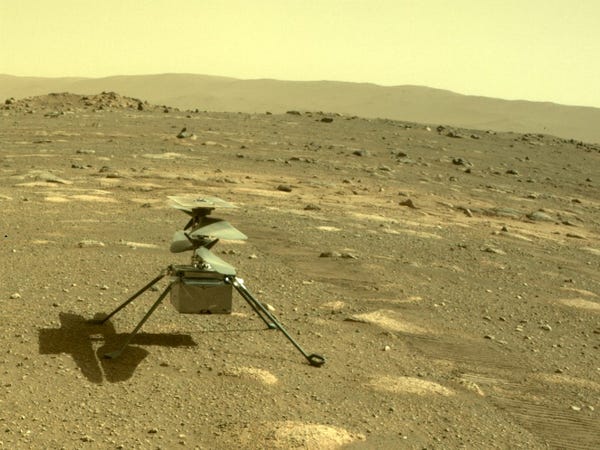 Ingenuity’s rotor blades have to spin at more than 2,500 rotations per minute — roughly five times the speed of a passenger helicopter on Earth. That’s the only way the drone can gain enough traction in the thin Martian air, which has about 1% the density of Earth’s atmosphere. It’s the equivalent of flying at three times the height of Mount Everest.

For the flight in the video — Ingenuity’s fourth — the rotor blades lifted it 16 feet off the ground. Then it flew south for about 436 feet, snapping photos of the Martian surface along the way. It stopped, hovered, and flew back to its original landing spot. The drone reached a record speed of 3.5 meters per second.

The NASA team the data that Ingenuity’s cameras gathered to make a 3D map of the Martian terrain and pick out a new airfield for the helicopter. During its next flight, which is scheduled for Friday, Ingenuity is set to retrace its path to this new location then land there. It will be the helicopter’s first one-way flight. Before landing, the drone is set to climb a record 33 feet high.

NASA’s original plan was to abandon the helicopter after its fifth flight. But Ingenuity has proven so successful that the agency decided to give it a secondary mission. From its new airfield, Ingenuity will begin testing operations that the agency might want to conduct with future space helicopters.

That includes scouting and mapping, observing interesting features of Mars from the air, and exploring rough terrain that rovers can’t access.

“The ability to fly the helicopter out into terrain that the rover cannot possibly traverse and bring back scientific data — this is extremely important for future missions that could combine a rover with a reconnaissance helicopter,” Perseverance scientist Ken Farley said in a briefing on April 30.