Many questions that arose in vaccine rollouts decades ago are still debated today. How should the local and federal authorities coordinate? Who should get vaccinated first? What should officials do about resistance in communities? Should the hardest-hit places be prioritized? Who should pay?

Some answers can be found in the successes and failures of vaccine drives over the past two centuries. 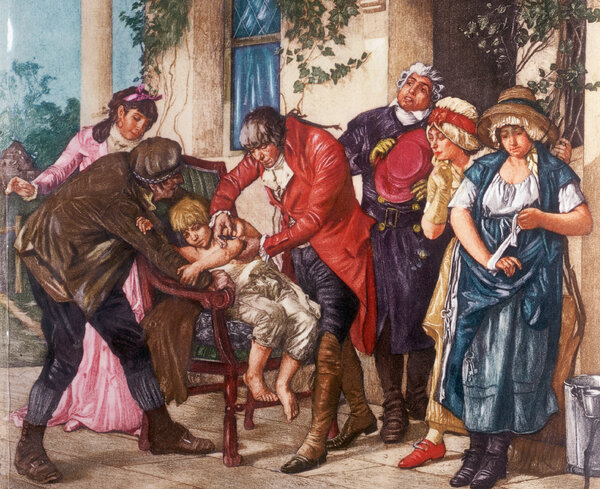 In 1796, once the scientist Edward Jenner discovered that people infected with cowpox became immune to smallpox, doctors went from town to town in England, deliberately spreading cowpox by scratching infected material into people’s arms.

The rollout worked on a local level, but how could it be distributed to people in faraway places, like in the Americas, where smallpox had devastated populations? In 1803, the Spanish government put 22 orphans on a ship to its territories in South America. The lead doctor, Francisco Xavier de Balmis, and his team injected cowpox into two of the boys, and then, once cowpox sores developed, took material from the sores and scratched it into the arms of two more boys.

By the time the team arrived in the Americas, only one boy was still infected, but that was enough. Vaccine distribution in the Spanish territories was unsystematic, but eventually, members of the Spanish expedition worked with local political, religious and medical authorities to establish vaccination clinics. More than 100,000 people in Mexico received free vaccinations by 1805, according to a journal article, “The World’s First Immunization Campaign,” in the Bulletin of the History of Medicine.

By the 20th century, when scientists had determined how to store and mass produce the smallpox vaccine, outbreaks had generally been contained.

But an outbreak in 1947 in New York City, just before an Easter Sunday parade on a warm weekend, posed a major problem. The city’s health commissioner at the time, Israel Weinstein, called for everyone to get vaccinated, even if they had received the vaccination as children. Posters across the city warned: “Be Sure. Be Safe. Get Vaccinated!”

The rollout was swift and well orchestrated. Volunteers and professional health care providers went to schools, delivering vaccines to students. At the time, the public had strong faith in the medical community, and the modern anti-vaccination movement barely existed. In less than a month, more than six million New Yorkers were vaccinated, and the city ended up recording only 12 infections and two deaths.

On April 12, 1955, the U.S. government licensed the first vaccine against poliomyelitis, created by Dr. Jonas Salk, after scientists announced that day that it was found to be 80 percent to 90 percent effective.

Answers to Your Vaccine Questions

While the exact order of vaccine recipients may vary by state, most will likely put medical workers and residents of long-term care facilities first. If you want to understand how this decision is getting made, this article will help.

Life will return to normal only when society as a whole gains enough protection against the coronavirus. Once countries authorize a vaccine, they’ll only be able to vaccinate a few percent of their citizens at most in the first couple months. The unvaccinated majority will still remain vulnerable to getting infected. A growing number of coronavirus vaccines are showing robust protection against becoming sick. But it’s also possible for people to spread the virus without even knowing they’re infected because they experience only mild symptoms or none at all. Scientists don’t yet know if the vaccines also block the transmission of the coronavirus. So for the time being, even vaccinated people will need to wear masks, avoid indoor crowds, and so on. Once enough people get vaccinated, it will become very difficult for the coronavirus to find vulnerable people to infect. Depending on how quickly we as a society achieve that goal, life might start approaching something like normal by the fall 2021.

Yes, but not forever. The two vaccines that will potentially get authorized this month clearly protect people from getting sick with Covid-19. But the clinical trials that delivered these results were not designed to determine whether vaccinated people could still spread the coronavirus without developing symptoms. That remains a possibility. We know that people who are naturally infected by the coronavirus can spread it while they’re not experiencing any cough or other symptoms. Researchers will be intensely studying this question as the vaccines roll out. In the meantime, even vaccinated people will need to think of themselves as possible spreaders.

The Pfizer and BioNTech vaccine is delivered as a shot in the arm, like other typical vaccines. The injection won’t be any different from ones you’ve gotten before. Tens of thousands of people have already received the vaccines, and none of them have reported any serious health problems. But some of them have felt short-lived discomfort, including aches and flu-like symptoms that typically last a day. It’s possible that people may need to plan to take a day off work or school after the second shot. While these experiences aren’t pleasant, they are a good sign: they are the result of your own immune system encountering the vaccine and mounting a potent response that will provide long-lasting immunity.

No. The vaccines from Moderna and Pfizer use a genetic molecule to prime the immune system. That molecule, known as mRNA, is eventually destroyed by the body. The mRNA is packaged in an oily bubble that can fuse to a cell, allowing the molecule to slip in. The cell uses the mRNA to make proteins from the coronavirus, which can stimulate the immune system. At any moment, each of our cells may contain hundreds of thousands of mRNA molecules, which they produce in order to make proteins of their own. Once those proteins are made, our cells then shred the mRNA with special enzymes. The mRNA molecules our cells make can only survive a matter of minutes. The mRNA in vaccines is engineered to withstand the cell’s enzymes a bit longer, so that the cells can make extra virus proteins and prompt a stronger immune response. But the mRNA can only last for a few days at most before they are destroyed.

The next day, The New York Times reported in a front-page headline: “Supply to be low for time, but output will be rushed.”

State and local health officials were in charge of the rollout to children, who were most at risk of contracting the disease.

“Young, African-American kids were getting hit, but they were not at the top of the priority list because of the social conditions at the time,” said Dr. René F. Najera, editor of the History of Vaccines project at the College of Physicians of Philadelphia. Noting that it was difficult for parents in working-class jobs to take off time to stand in line with children at clinics, Dr. Najera said, “You see this over and over again, history kind of repeats itself.”

Shortly after the rollout began, the program was suspended after reports that children had contracted polio in the arms where they received the vaccination, rather than the legs, which was more typical of the disease.

More than 250 cases of polio were attributed to faulty vaccines, caused by a manufacturing error by one of the drugmakers involved in the effort, Cutter Laboratories, based in California, according to the Centers for Disease Control and Prevention.

The so-called Cutter Incident led to stronger regulatory requirements, and the vaccine rollout continued in the fall of 1955. The vaccine prevented thousands of cases of crippling illness, saved lives and ultimately ended the yearly threat of epidemics in the United States.

“The possibility was raised today that the virus that caused the greatest world epidemic of influenza in modern history — the pandemic of 1918-19 — may have returned,” The Times reported on Feb. 20, 1976.

An Army private in Fort Dix, N.J., had died from a type of swine flu that was genetically similar to the virus that caused the deadly influenza outbreak starting in 1918. President Gerald Ford acted quickly, and Congress purchased 200 million doses of vaccines to be distributed at no cost through state health agencies.

But the campaign got off to a difficult start, after several people died soon after receiving shots at the same clinic in Pittsburgh. Two months later, reports emerged that some vaccine recipients developed Guillain-Barré syndrome, a rare neurological condition in which the body’s immune system attacks the nerves. Vaccinations were halted.

In the end, the virus was not detected outside Fort Dix, and the Army private turned out to be the only known death from the virus.

The H1N1 influenza virus, which originated in Mexico, struck in spring 2009, not in typical flu season.

By late summer it was clear that the virus caused fewer deaths than many seasonal flu strains, and that some of the early reports from Mexico had been exaggerated. That was one of the big reasons that a lot of Americans avoided the flu vaccine when it was ready in the fall. It wasn’t just the anti-vaccination movement, though that was a factor.

The H1N1 virus was tough on children and young adults and appeared to have a disproportionately high fatality rate among pregnant women. Because of these factors, the first groups to be vaccinated, after health care workers, were people with the highest risk of complications, pregnant women and children.

The last group to be eligible for the vaccine were healthy people over 65, who were the least likely to contract it because they seemed to have had some resistance to it.