Mum’s the word! Female chimps with a powerful mother are more likely to stay at home instead of striking out on their own despite the risk of breeding with their own BROTHERS

Female chimps often leave their family unit as they reach puberty but research has found those with a powerful mother are more inclined to stay put.

Normally, females leave to find a new group when they are around 11 years old, in order to avoid inbreeding with their brothers.

Males however, stay in the same group for life and work together to defend the colony.

But researchers from Duke University in the US found the perks of having a high-ranking mother encourages some females to stay.

Being in close proximity to a powerful mother means young females can use some of their mother’s social clout to get more food.

This, it appears, is worth staying put for and overcomes the risk of mating with their brothers and having inbred offspring that will likely not survive to adulthood. 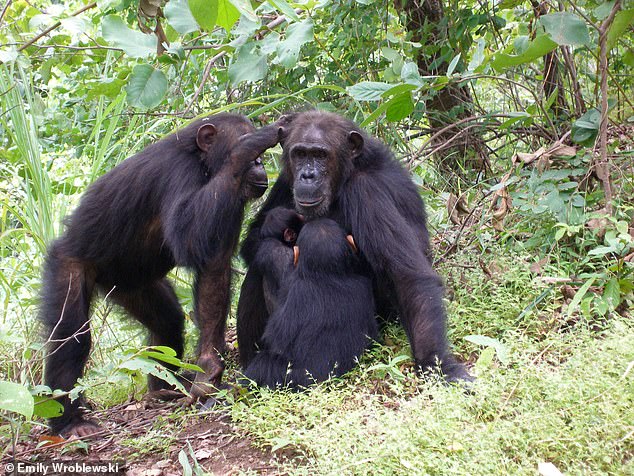 Pictured: Gaia the chimpanzee grooms with her mother Gremlin at Gombe National Park. A new study finds that female chimps with a high-ranking mother are less likely to leave home, instead reproducing in the group where they grew up

WHY DO FEMALE CHIMPS LEAVE THEIR FAMILY?

Chimps are unusual among mammals in that daughters, not sons, typically pick up their roots at puberty and move away from their families.

Males spend their entire lives in the group where they were born, cooperating to defend their territory,.

Females however, often move away permanently when they reach puberty.

Immigrant chimps risk a great deal – leaving behind the familiar faces and comforts of home to strike out alone on a perilous journey, only to face multiple challenges upon arrival.

Compared to stay-at-home females, those who leave are often attacked by resident females when they arrive in a new group.

They also get a later start on motherhood.

It is unknown exactly why females leave their original family group but it may be to avoid interbreeding.

Although siblings often avoid mating with one another, it does happen occasionally.

In these instance, the offspring has only around 25 per cent chance of survival.

The data spanned 45 years and included observations of 31 chimpanzees.

Scientists have long sought to understand why females leave the group, often between the ages of 11 and 13, and a clear explanation has never been found.

Professor Pusey says she has sought to answer this question with her research for several decades.

Leaving home to find a new group is risky, with many of the immigrant chimps being attacked by other females as they join a new group.

As a result of their perilous journey they also often get a later start on motherhood.

In the study, published in the journal Current Biology, the researchers found the issue may be related to the potential for inbreeding.

Groups all had similar amounts of food and numbers, indicating competition for space or meals was not the main factor driving the adolescent chimps out of the group.

However, young females in a group with a larger number of brothers were forced out.

Researchers say this may be in an attempt to avoid inbreeding.

Normally, brothers and sisters express little sexual interest in each other but, in some situations, high-ranking brothers persuade their female siblings to mate with them.

This has catastrophic implications for the offspring of these trysts, with only 25 per cent of the children surviving to adulthood.

‘Breeding with a brother is a pretty costly mistake,’ Dr Walker said.

As a result, the females are ousted to avoid the high mortality rate and a corrupted gene pool.

The research proved avoiding inbreeding is the principle reason for why teen female chimps leave, but it also uncovered the one factor which can stop them leaving — their mother.

If the mother of a family with lots of brothers is of high social stature, it can supersede the exile process.

It seems for female chimpanzees, the occasional pestering by a brother wanting to mate is a price they are willing to pay for an easier life.