The fastest Corvette ever made comes out later this year, and it is not powered solely by a howling V8 engine – but is a gas-electric hybrid.

The E-Ray, aimed at affluent buyers who want new technology in the top-line Chevrolet sports car, goes from zero to 60 mph in 2.5 seconds and completes a quarter mile in 10.5 seconds.

The $104,000 vehicle, which is being unveiled precisely 70 years after the first Corvette was introduced in New York back in 1953, is a step toward an all-electric version of the car that will come out at an unspecified date.

Although those figures are slightly faster than its race track-ready brothers, the Z06 and Z07, E-Ray is civil enough for the daily commute even though its rear tires are almost wide enough to compete in the Indianapolis 500.

GM said that the E-Ray will hit showrooms sometime during the second half of this year as a 2024 model. 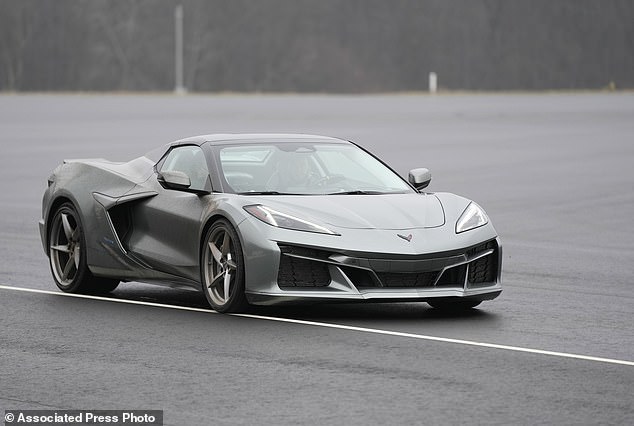 GM announced its fastest Corvette, called the E-Ray.  The vehicle goes from zero to 60 mph in 2.5 seconds

The Corvette features all-season tires, allowing it to be driven year-round, and the all-wheel-drive system is configured so it is confident in the snow up to just four inches due to its low ground clearance.

Tadge Juechter, the Corvette’s executive chief engineer, said people would ask for the best version of the car, only to wind up a ‘track monster’ that they’re trying to drive every day.

Speed demon, Scot Burner, 53, of Nashville, earned his place in the catalog of dubious achievements for hitting a top speed of 47 MPH for a complete mile in reverse gear.

‘For the same money, you can get all-wheel-drive and comfort, security, and the livability that comes with a car like this,’ Juechter said.

As performance cars go, the Corvette always has been more practical than most, with storage space in the hatch and the front trunk, said Sam Abuelsamid, e-Mobility analyst for Guidehouse Research.

‘It is actually surprisingly liveable,’ he said, conceding that someone buying a sports car costing over $100,000 likely has another vehicle in their garage for the daily drive.

Unlike most hybrids, the E-Ray is not really made for efficiency, although it will get a little better city mileage than a standard Stingray at 16 mpg.

But because of higher mass and air drag, it will do worse than the standard Corvette’s 24 mpg on the highway. The electric motor adds 160 horsepower to the 495 generated by the V8, for a total of 655.

Both systems come on at once for maximum acceleration.

Engineers say its technology sets the stage for the all-electric Corvette.

When the latest generation of ‘Vette came out four years ago with the engine in the middle, engineers designed it to have hybrid and electric versions in the future.

This version of the Corvette, code-named ‘C9,’ may be the last one to have a gasoline engine, in light of GM’s plans to sell only electric passenger vehicles by 2035, Abuelsamid said. 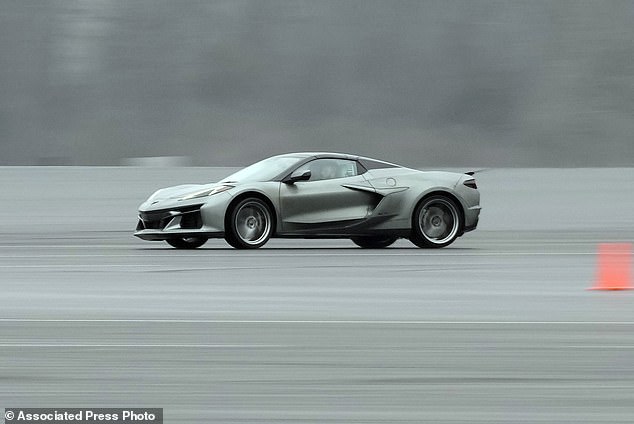 The E-Ray is also the first hybrid Corvette, which GM aims to use as a stepping stone for its first all-electric vehicle 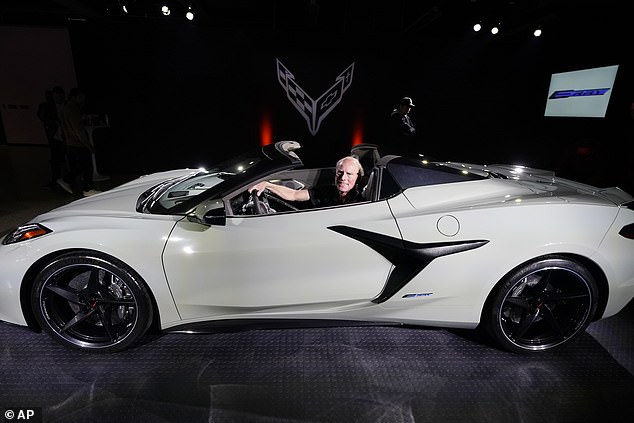 GM said that the E-Ray will hit showrooms sometime during the second half of this year as a 2024 model. Tadge Juechter, the chief engineer-Cadillac XLR & Chevrolet Corvette is seen in the 2024 Corvette E Ray 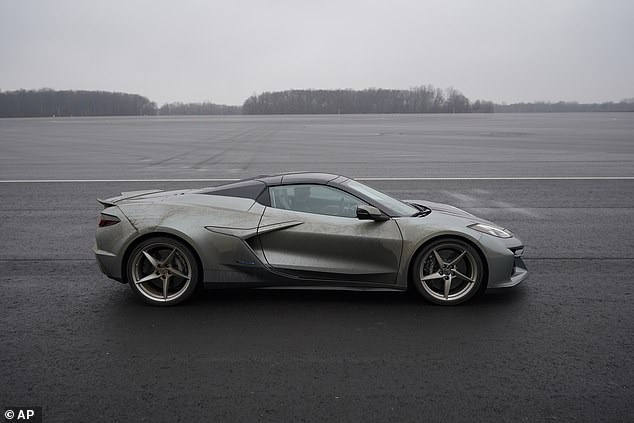 The Corvette features all-season tires, allowing it to be driven year-round, and the all-wheel-drive system is configured so it is confident in the snow up to just four inches due to its low ground clearance

But he sees this version evolving at least through the end of the decade.

The E-Ray’s computers are configured to keep it stable by applying power to individual wheels when it’s slippery.

It is a lot of engineering work for a niche product, but GM says knowledge from developing the car will show up in other vehicles. GM sold only 34,510 Corvettes last year.

‘I think the blending of the motor control and brake control is something they’ll be able to apply to the EVs,’ Abuelsamid said. 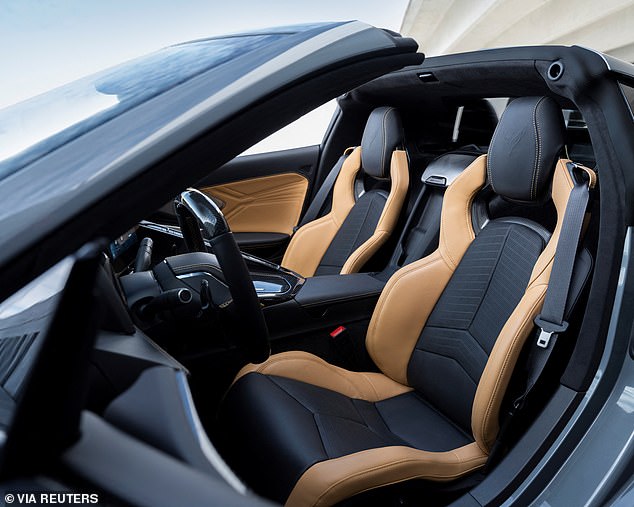 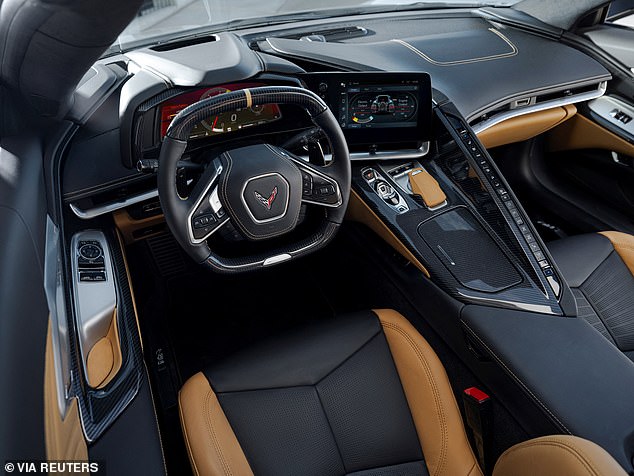 There is also a large display at the center that displays driving information, such as navigation and weather

The 1.9-kilowatt-hour battery is small compared with a fully electric vehicle. It’s positioned under the console.

You cannot plug it in to recharge it, but it gets energy restored from regenerative braking and the V8 motor.

GM says the Corvette can be driven in ‘stealth mode’ up to 45 mph for about two miles to leave a neighborhood quietly.

‘As fast as you can discharge it, we recharge it, and we always keep it at a pretty optimum state of charge,’ said Mike Kutcher, lead development engineer for the E-Ray.