Cats WILL eat a dead human given the chance, scientists find, after feral felines manage to slip into grounds of forensic research center to feast on the flesh of bodies left outside

It seems maggots are not the only creatures with a taste for human flesh – cats also enjoy dining on the dead.

Although the pair had more than 40 different bodies to choose from, they returned to the same body each night – one was a 70-year-old man and the other a 79-year-old woman.

Researchers found the cats preferred soft tissue, especially in the shoulder and arm,

However, team noted that these patterns are more like a bobcat scavenging for food rather than that of domestic cats. 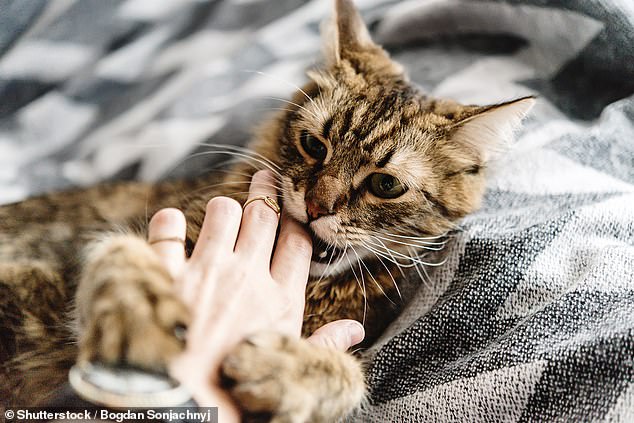 The Colorado Mesa University’s Forensic Investigation Research Station is a facility known as a ‘body farm’ that uses donated corpses for research and teaching.

Scientists and students document what happens to rotting human remains in order to help law enforcement, coroners and medical examiners determine ‘what is natural that happens to a body and what is not natural,’ said Melissa Connor, a forensic anthropology professor who is director of the station, The Washington Post reported.

The team was learning about how human bodies decompose, which they placed outside of the ‘body farm’, then documented and photographed what they observed.

However, they spotted two feral cats wandering into the area savaging for food. The cats did not travel together.

The study reports that a ‘striped cat’ breached security and was observed consuming a body that belonged to a 79-year old woman.

The team placed the body under a cage so not to disturb their own study, which kept the cat away until the cage was taken off – the striped animal returned shortly after to munch on the body. 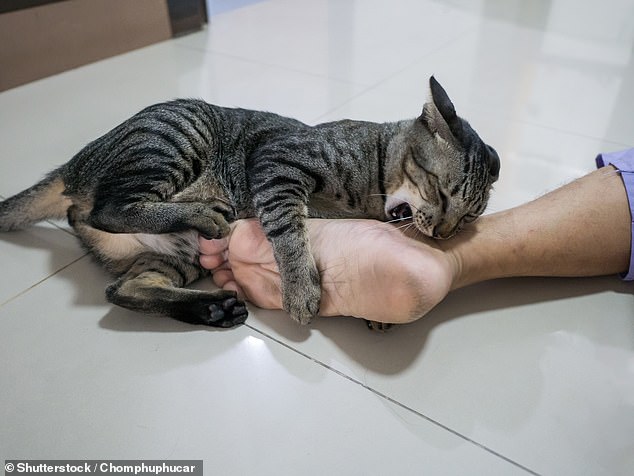 Researchers found the cats preferred soft tissue of the shoulder and arm, differential consumption of tissue layers and superficial defects. However, team noted that these patterns are more like a bobcat scavenging for food rather than that of domestic cats (file image)

A second cat, which was all-black, came trotting along shortly after, but scientists let him have a go until he had his fill.

This feline chose the remains of a 70-year-old man that was outside the facility for almost a week.

Researchers found it had a taste for the left side of the body, preferring the arm and abdomen. Experts found that although the cats had a buffet of more than 40 bodies from which to choose, each one returned to the corpse it had selected again and again.

And the two also showed a preference to soft tissue that had previously been damaged.

‘The main theory is that cats are, like, picky eaters. Once they find a food that they like, they’ll stick with it,’ said Garcia, the lead author on the paper, which was published in the Journal of Forensic Sciences.

The claw marks left behind on the bodies are deemed to be ‘scientifically valuable’ because this activity is rarely documented – but they are not rare themselves.

‘Any coroner or medical examiner will tell you of cases where a body was shut up with a pet that scavenged the owner eventually,’ Connor said.

A cat behavior researcher at the University of California at Davis School of Veterinary Medicine, Mikel Delgado, was not also surprised by this behavior.

She wrote in her blog about a time when she was working at an animal shelter and ‘a cat that came in when her owner had died, and the report said that she’d eaten the person’s nose,’ said Delgado, who wrote on her blog about the Colorado scavenging.

‘It’s not a behavior problem. It’s just a fact of life.’