Ancient Roman baths that were ‘spas’ for farmers and fishermen 2,000 years ago are discovered amazingly well-preserved in Spain

Ancient Roman baths dating back some 2,000 years have been discovered in the Andalusia region of southwest Spain.

The baths were likely intended as a place for local farmers and fishermen to relax and unwind.

The complex would have been warmed with hot air heated in a subterranean oven and spread through the walls and floors.

The sand on Cádiz’s Caños de Meca beach preserved this 1st century bath complex, which still has a door, windows and walls intact

For millennia the structure was obscured by dunes that only recently eroded to the point where their bounty could be discovered by archaeologists at the nearby University of Cadiz.

Typically, Roman-era discoveries in Spain are limited to ruins and remnants of foundations, but the baths retained some 14-foot walls and other features.

According to the university, the complex spread over 2.5 acres, though only two rooms have been excavated so far.

‘It is a structure that has an exceptional state of conservation for the Iberian Peninsula and the western Mediterranean in general,’ historian Darío Bernal told EFE.

Rather than for nobility, baths were likely intended for the working class, specifically fishermen and farmers. 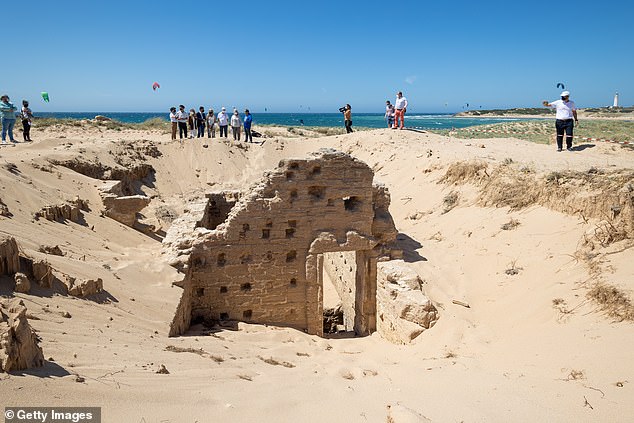 According to the University of Cadiz, the complex spread over 2.5 acres, though only two rooms have been excavated so far 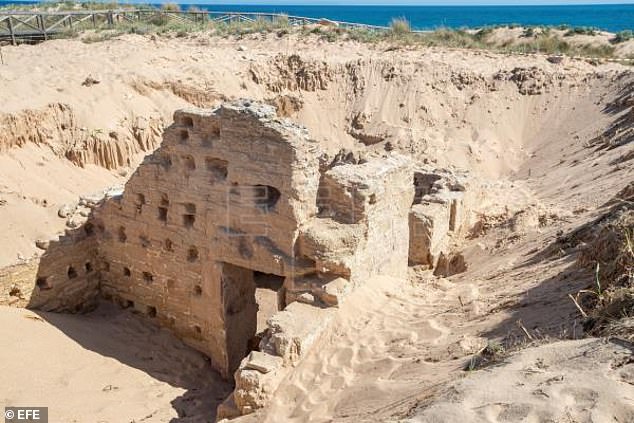 When the baths were functional, an oven would have spreadi heated air through the walls and floors and kept the bath water nice and warm 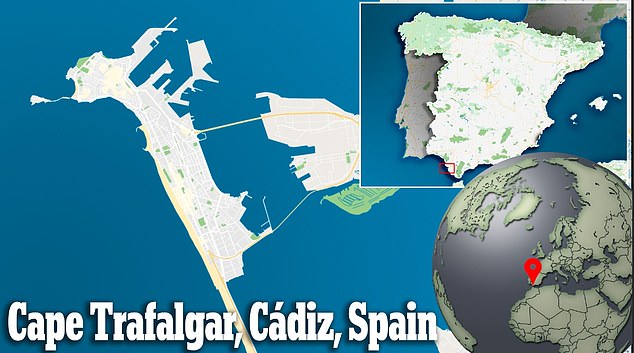 Cadiz (pictured with red arrow), in southwest Spain, was renowned for its fish products during the Roman era

During the Roman era, Cadiz was renowned for its fish products, including a fermented fish sauce known throughout the region, reported Murcia Today.

The baths would have been a relatively innovative complex, Bernal said, with water heated in giant ovens making its way into various pools.

The rooms themselves would have been heated with a hypocaust, a central heating unit located under the bath house’s raised floor.

The baths were just the kind of find archaeologists with University of Cadiz’s ‘Arqueostra’ project were looking for.

The team was initially under the impression the structure was part of a fish or crustacean farm.

Locals report crossing the dunes for ages and having no idea the baths were there.

Experts say the sand is likely responsible for the site’s incredible preservation. 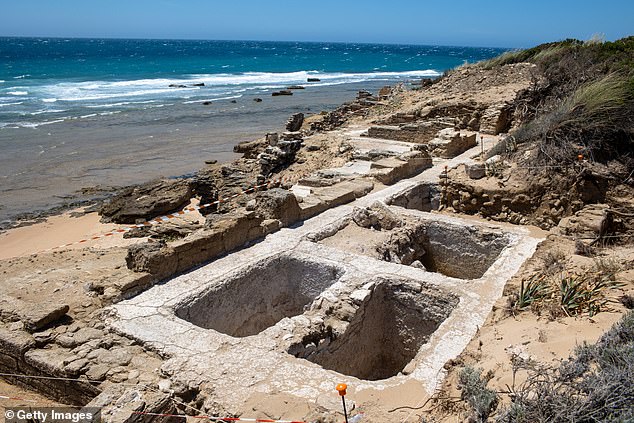 More than a half-dozen salting pools were found in nearby Cape Trafalgar, with several still containing ‘remains of Roman preserves’

Some 12th- and 13th-century ceramics were also found near the baths.

More than a half-dozen pools were found in another site in nearby Cape Trafalgar, but those were for salting food, not bathing.

The pools ranged in depth from 5 to 6.5 feet, with ‘remains of Roman preserves’ found in two of them, according to the university.

An intact tomb found nearby dates back 4,000 years, and contained the skeletons of several individuals still inside.

Andalusian culture minister Patricia del Pozo called the various discoveries ‘wonderful,’ and demonstrated the region was ‘an ​​incredibly attractive area for all types of civilizations, which endows us with incredible history.’

Just off the waters of Cape Trafalgar is the site of one of Europe’s most famous naval conflicts: the Battle of Trafalgar, where the British Royal Navy led by Admiral Horatio Nelson routed Napoleon’s fleet in 1805.

HOW DO ROMAN BATHS WORK?

Water stored in aqueducts would flow down into bath buildings where it would be heated by huge ovens. The heated water would then flow into different pools through underground tunnels before being drained.

The interior of Roman baths would also be heated inside using a central heating method called a hypocaust. The bath floor would be raised by around 2ft, and kept up using pedestals. Hot air from the fire heating the water would flow between these pedestals, heating the floor above.