Helen Flanagan shares snap of herself breastfeeding son Charlie, 8 weeks, as she reveals she is having ‘the best time in Cornwall’ with daughters Matilda, 5, and Delilah, 2

She welcomed her third child, a son called Charlie, in March with footballer fiancé Scott Sinclair.

And Helen Flanagan shared a candid snap of herself breastfeeding her baby, eight weeks, in a restaurant on Instagram on Thursday as her family enjoyed a seaside getaway in Cornwall.

Helen, 30, later made sure her two young daughters, Matilda, five, and Delilah, two, were the centre of attention, when she posed with her girls for a sweet family snap from their Falmouth holiday home. 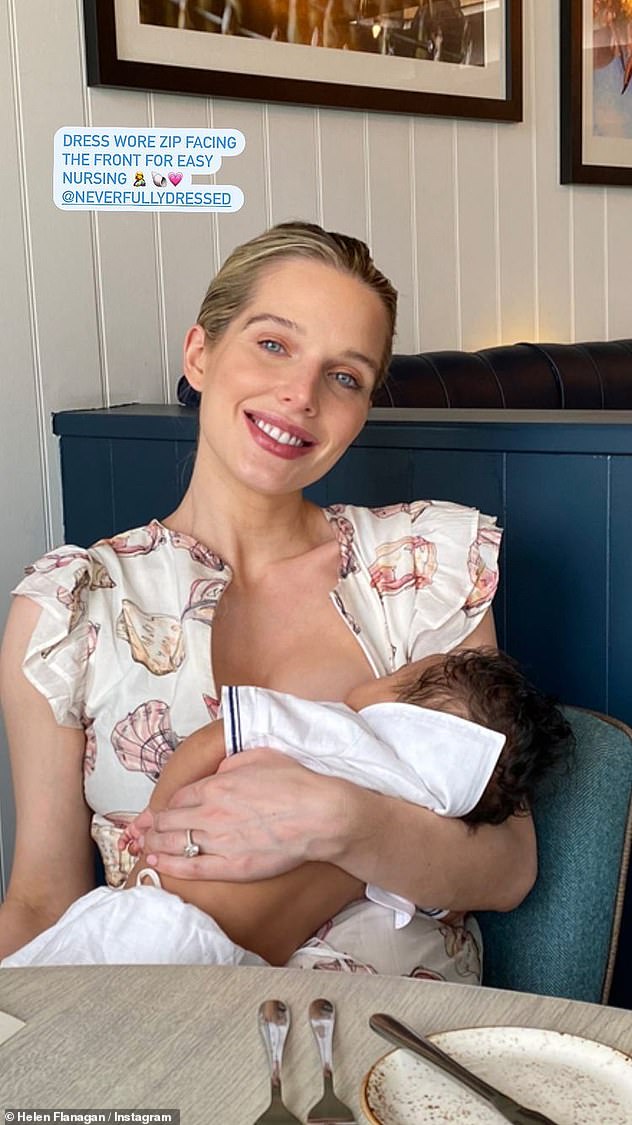 Candid: Helen Flanagan, 30, shared a candid snap of herself breastfeeding her son Charlie, 8 weeks, in a restaurant on Instagram on Thursday as her family enjoyed a seaside getaway in Cornwall

Looking typically stylish in a seashell-adorned dress, Helen told fans: ‘Been having the best time in Cornwall, turned my phone off to be present with the girls.’

Both Matilda and Delilah were wearing matching Burberry dresses, and the little girls looked delighted to be spending time with their mother by the seaside.

The doting mother and her girls posed for a snap while standing in front of their beach-themed property’s teal exterior.

With wooden decking and circular windows that were reminiscent of a ship’s, the family spent the last few days in seaside town Falmouth.

Helen previously revealed the family were unwinding at the town’s luxury St Michaels Resort, with the hotel boasting tropical gardens and being situated just a stone’s throw from the beach. 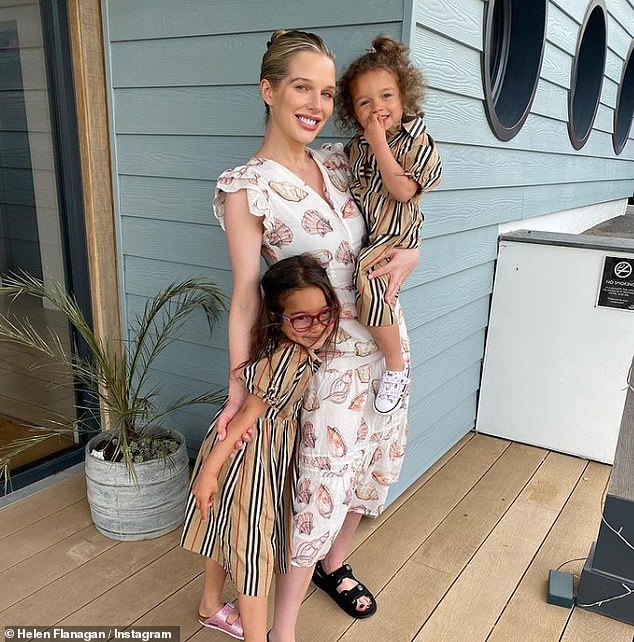 Family: Helen then posed with daughters Matilda, five, and Delilah, two, outside their Falmouth holiday home 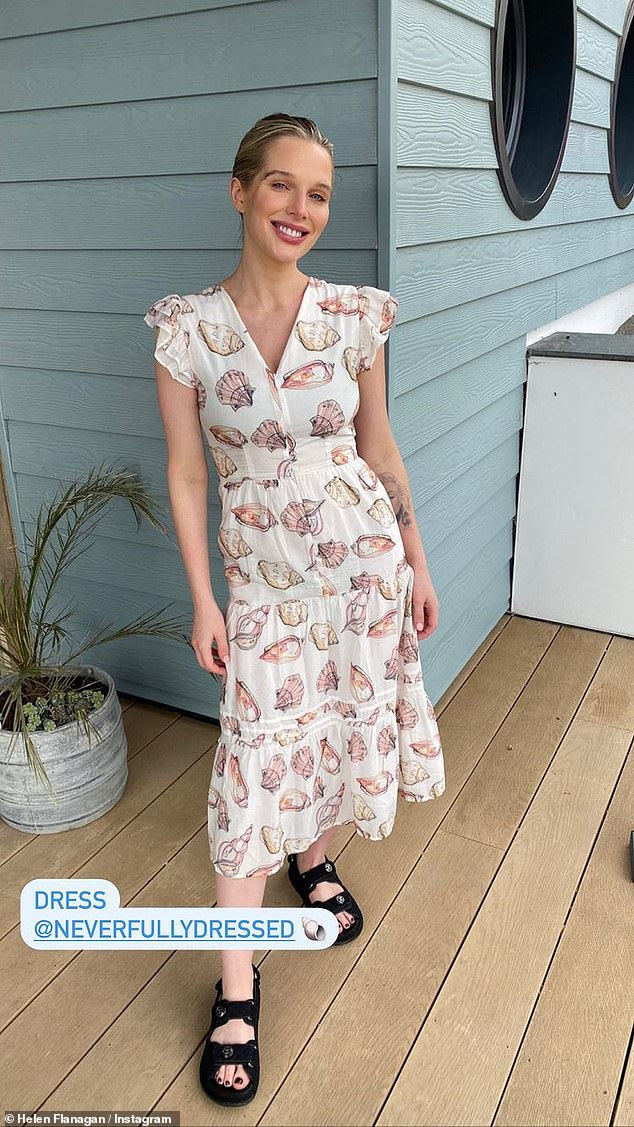 Stylish: Looking typically stylish in a seashell-adorned dress, Helen told fans: ‘Been having the best time in Cornwall, turned my phone off to be present with the girls’

The family’s getaway comes after Helen revealed she would have to wait ‘a very long time’ if she decided to have another baby due to her suffering badly with hyperemesis gravidarum.

Sharing her experience with the extreme morning sickness, the mother-of-three explained: ‘It got worse with each pregnancy. It was worth everything but it was horrendous. 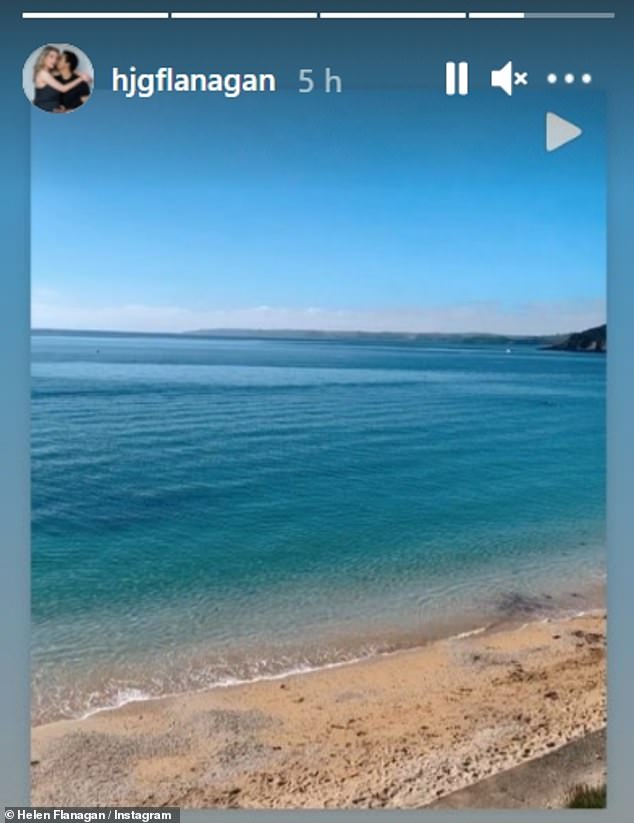 Stunning: Earlier on Thursday Helen shared a photo of the beautiful Falmouth Bay with her social media followers

‘As soon as I found out I was pregnant with Charlie, I said to my mum I hope I don’t get Hyperemesis. I hope I’m OK.

‘I had to live with my mum and dad for three, four months. I couldn’t look after them. Now I’m not pregnant I feel like a normal mum again, I have loads of energy which is lovely.’

Helen added: ‘I had medication that worked with Delilah but I was just immune with Charlie. You’re constantly sick but it makes you feel low as well, you’re so on your own.

WHAT IS HYPEREMESIS GRAVIDARUM?

Hyperemesis gravidarum (HG) is defined as severe nausea and vomiting during pregnancy.

Celebrities who’ve been open about their own battles with HG include:

It affects up to two percent of pregnant women.

HG symptoms usually appear between weeks four and six and peak at 9-to-13 weeks.

Up to 20 per cent of sufferers experience symptoms up to weeks 14-to-20, however, most have relief in the later stages.

Unlike morning sickness, which affects up to 80 percent of pregnant women, HG causes severe dehydration and prevents sufferers from keeping any food down.

Some HG cases require hospitalization where women can receive IV fluids and nutrition.

HG’s cause was thought to be hormonal, however, research suggests it may be due to genetic variations.

‘I couldn’t have the lights on, I couldn’t watch the TV, the lights would just make me feel sick. We’re so lucky to have a baby but Hyperemesis is a tough one.’

Helen’s words come after she previously ruled out having any more children after the birth of her third baby Charlie in March.

Speaking to Fabulous magazine earlier this year, she said: ‘I always really wanted four children, but after the hyperemesis this time, I could never go through it again. So the decision about having more children after this one has been taken out of my hands, really.

‘It’s funny, I always thought if I knew I was carrying my last baby I would feel really sad about it, but because of what happened, I don’t see it like that. I see it as a positive decision and one I’m completely happy with.’ 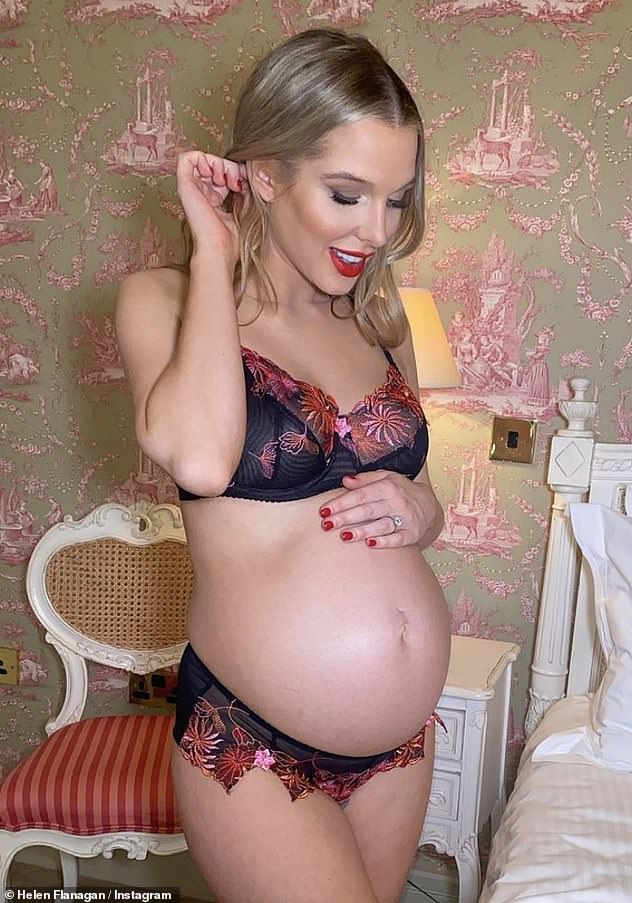 Tough: Helen revealed she would have to wait ‘a very long time’ if she decided to have another baby due to her suffering badly with hyperemesis gravidarum 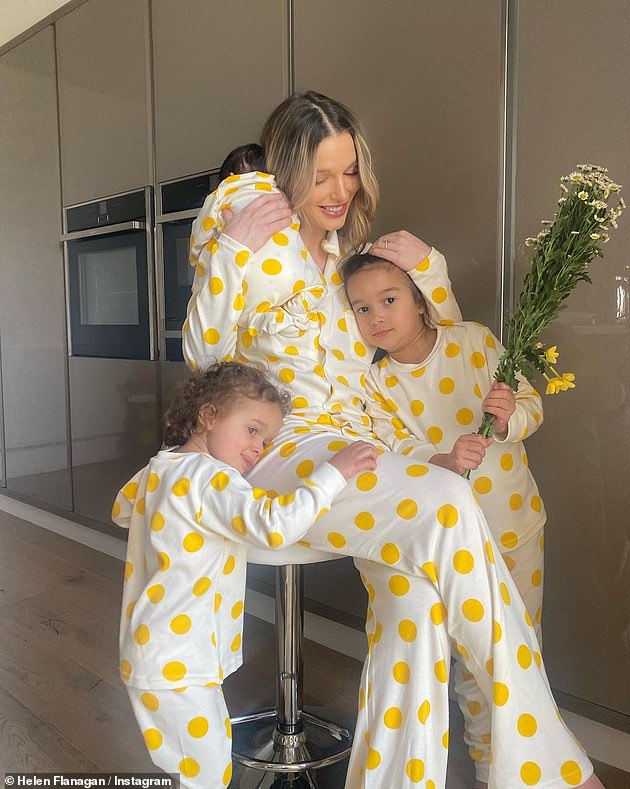