The European Space Agency is ending its collaboration with Russia on future moon missions.

It said it would no longer cooperate with Moscow’s space agency Roscosmos on the science missions Luna 25, 26 or 27 because of the ongoing war in Ukraine.

ESA had intended to fly important technologies on the three robotic missions to the moon, beginning with the scheduled launch of Luna 25 in August.

‘Following the Russian aggression against Ukraine, ESA’s Director General has initiated a comprehensive review of all activities currently undertaken in cooperation with Russia and Ukraine,’ ESA said in a statement. 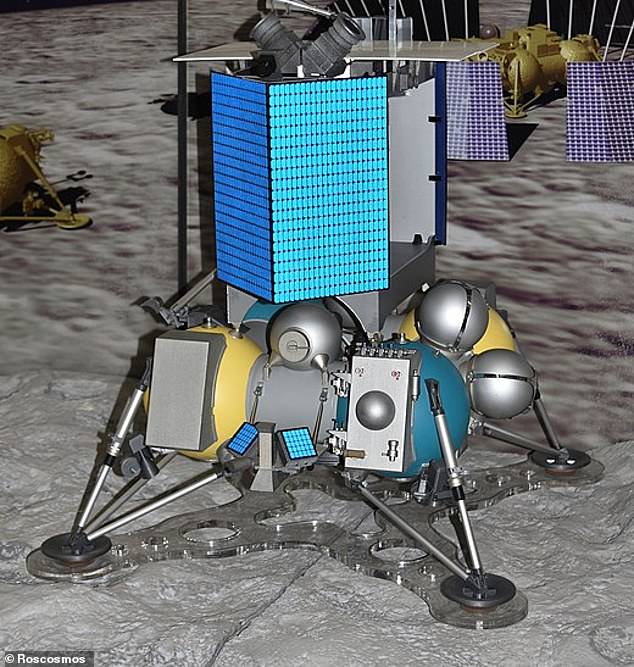 The European Space Agency is ending its collaboration with Russia on future moon missions. It said it would no longer cooperate with Moscow’s space agency on the science missions Luna 25 (pictured in an artist’s impression), 26 or 27 because of the ongoing war in Ukraine

Note: Latvia, Lithuania and Slovenia are associate members, while Canada takes part in certain programmes under a cooperation agreement.

‘The objective is to determine the possible consequences of this new geopolitical context for ESA programmes and activities and to create a more resilient and robust space infrastructure for Europe.’

It added: ‘The Russian aggression against Ukraine and the resulting sanctions put in place represent a fundamental change of circumstances and make it impossible for ESA to implement the planned lunar cooperation.’

The statement said that ‘ESA’s science and technology for these missions remains of vital importance’ and the space agency was working to find alternatives to continue the missions using other machines.

The agency is also currently working on an alternative path to fly its pilot precision landing and hazard avoidance technology, intended for Luna 27 and important for the proposed European Large Logistic Lander.

Last month ESA said it would be ‘impossible’ to continue working with Roscosmos on the British-built Mars rover project, which has suffered repeated delays since the idea was first approved back in 2005.

Formally known as ExoMars, the mission to send the Rosalind Franklin rover to the Red Planet had been earmarked for September.

It was due to launch from Baikonur, Kazakhstan, on a Russian rocket and land on Mars eight months later using Russian hardware.

However, the entire project is now at risk because of the worsening diplomatic crisis over the war in Ukraine.

The rover had only a limited time to launch to the Red Planet this year because of the alignment of the planets.

Now this short, 10-day window has been slammed shut, Rosalind Franklin will have to wait at least another 26 months to launch, if ever.

Roscosmos was set to provide some technology, scientific payloads, and launch vehicles for the mission, but the key elements of it, including the Rosalind Franklin rover, are ESA projects and have passed their flight readiness reviews.

Another example of how ESA is trying to find new partners outside of Russia is the recently signed agreement with the Japanese Space Agency, which will involve flying a mass spectrometer on Japan’s ISRO LUPEX lunar rover mission scheduled for 2024.