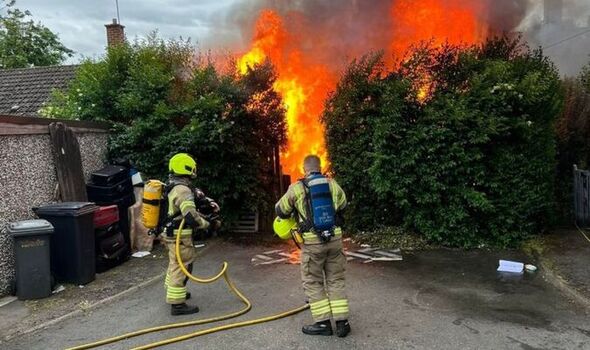 Recalling the incident, Ms Bower, 31, said: “The fire got really high, I think she [the friend who lives in the property] had gas canisters there, and the flames were higher than the house, there was a lot of stuff built up back there, too.

“She’s only really got access out the back of her house, but me and a friend ran around the front because we needed to get her dog out. It’s an American Akita that weighs about 12 stone but we managed to get around the front and pulled him out. As we were doing that, we could hear what sounded like petrol or gas canisters popping in the back garden.”

A total of nine emergency calls were made, and members of the local community tackled the blaze with garden hoses.

Chains were formed to attack the fire with buckets of water when the fire service arrived at the scene. Ms Bower, a self-employed cleaner who lives in Denver Court, explained she could smell rubber at first. She spoke of the moment when she realised the home of her friend was at risk.

“A kid that lives around here came up to me and told me about it,” said Ms Bower. “I rang the woman who owns the house as I know her, and all she said was ‘my garden, my garden’.

“I ran around and, by the time I got there, there were already two or three neighbours getting hosepipes. There were around 20 people or so doing everything we could in the end, people were panicking like mad at first.” It was then that she came to the rescue of the dog.

Ms Bower continued: “The woman had gone back in to get some things, and we shouted for her to get out, that we had the dog and that we needed to go. It was hectic for the whole street but everyone was chipping in and doing what they could – as weird as it sounds, it was nice to see in obviously what were bad circumstances.” 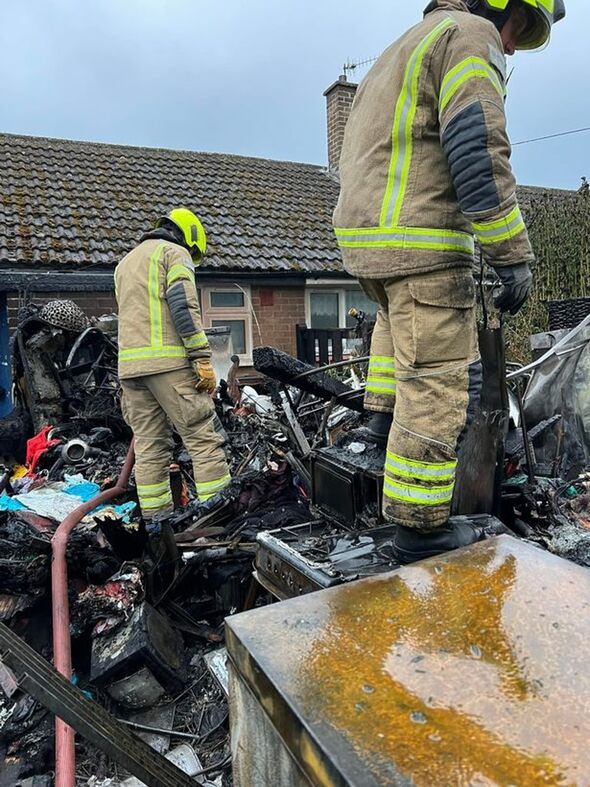 Firefighters said once they arrived it was thought that the fire had spread to the house and was threatening neighbouring properties.

Three main firefighting jets were used, with 19,000 litres of water used over the course of six hours to extinguish the blaze, which was contained to the garden it was started in and the back of the adjoining property, which was damaged.

Around 10 properties were evacuated at the height of the incident. No injuries have been reported.

A spokeswoman for Nottinghamshire Fire and Rescue Service said: “Following a fire investigation, we have been able to determine that the fire at Denver Court, Stapleford, had started in the garden. Due to both the severity of the fire and the dry ground from warm weather, the fire spread very quickly. But after many hours of hard work from firefighters they managed to extinguish the fire before it spread even further.

“The fire did spread to the house. However, this could have been a lot worse – windows and outside guttering were damaged. We are continuing to work with partner agencies to get to the bottom of this incident.”

Nottinghamshire Police have confirmed they are investigating the incident. They’re asking anyone with information to come forward.

“Nobody was injured during the blaze, which was put out by firefighters after causing limited damage to the outside of the house.

“Police are in the process of investigating what may have caused the fire and so would ask anyone who witnessed what happened or has any information to call 101, quoting incident 679 of June 30.”