Earth has a SECOND ‘Trojan asteroid’: 1,800ft-wide space rock is trapped in the same orbit as our planet for at least 4,000 years

Earth’s second ‘Trojan asteroid’ — a space rock that shares the same orbit around the sun as a planet — has been discovered by astronomers.

Prior to the detection of Earth’s first Trojan asteroid in 2010, the space rocks had only been spotted at Jupiter, Neptune and Mars.

This second example, named 2020 XL5, will remain trapped in the same orbit as Earth for at least 4,000 years, according to an international team of researchers.

Trojan asteroids orbit in the same plane as a planet, but don’t collide with it because they occur in ‘dead zones’ where gravitational forces allow the space rock to circle in a ‘sweet spot’ at precisely the same speed as the planet. 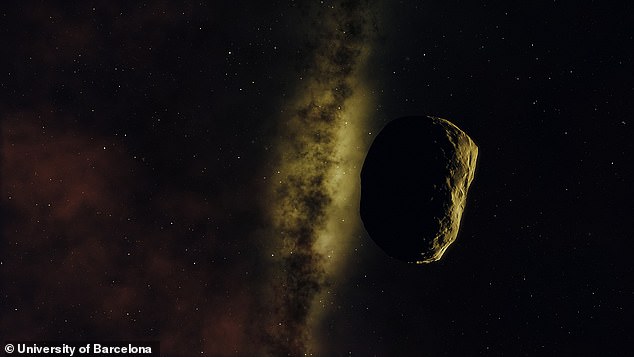 Discovery: Earth’s second ‘Trojan asteroid’ (pictured in an artist’s impression) — a space rock that shares the same orbit around the sun as our planet — has been found by astronomers

WHAT IS A ‘TROJAN ASTEROID’ AND WHERE ARE THEY FOUND?

A ‘Trojan asteroid’ is a type of space rock that shares the same orbit around the sun as a planet.

They had previously only been spotted at Jupiter, Neptune and Mars prior to 2010.

However, the discovery of 2010 TK7 made Earth the fourth planet in the Solar System that is known to share its orbit with an asteroid.

Now, a decade later, the second of Earth’s Trojan asteroids has been spotted by an international team of researchers.

Experts say it is a great candidate for future fly-by missions.

Trojans orbit in the same plane as a planet, but don’t collide with it because they occur in ‘dead zones’ where gravitational forces allow the space rock to circle at precisely the same speed as the planet.

The newly-detected 2020 XL5 is 1,800ft-wide and is a great candidate for future fly-by missions when astronauts eventually go beyond the moon and the International Space Station, experts have said.

It is also highly likely that there are other Trojans waiting to be found not far from Earth.

The asteroids are important because experts hope their peculiar orbits will help shed light on what the early Solar System was like and how it evolved.

Researchers led by the University of Barcelona used ground-based observations to determine that the 2020 XL5 asteroid is most likely composed of carbon, and may have been ejected from the main asteroid belt by Jupiter.

It was originally discovered on December 12, 2020.

Early observations suggested that it might have been an Earth Trojan asteroid, but experts said that because of low observational coverage, orbital uncertainties were too large for confirmation until now.

Toni Santana-Ros, of the University of Barcelona, studied the orbit of 2020 XL5 with colleagues and combined archival data with observations from three ground-based observatories.

Using this analysis, the scientists confirmed 2020 XL5 to be the second identified Earth Trojan asteroid, after 2010 TK7.

They also carried out an orbital stability analysis and believe that 2020 XL5 will remain in its orbit for at least 4,000 years.

The authors said 2020 XL5 was a larger asteroid than 2010 TK7, which will never get closer than 50-times the distance the moon sits from the us, and may be a better candidate for a future fly-by mission.

They wrote in their paper: ‘Trojan asteroids are small bodies orbiting around the L4 or L5 Lagrangian points of a Sunplanet system.

‘Due to their peculiar orbits, they provide key constraints to the Solar System evolution models.’

The researchers added: ‘We confirm that the recently discovered 2020 XL5 is the second transient Earth Trojan known.

‘To study its orbit, we used archival data from 2012 to 2019 and observed the object in 2021 from three ground-based observatories.’

They said Trojan asteroids close to Earth ‘may become ideal targets for space missions and, in the more distant future, to settle human bases or install scientific hardware that would benefit from their peculiar location’.

The study has been published in the journal Nature Communications.