Fragments of 3,500-year-old pottery have revealed that one of the world’s earliest known uses of opium was likely for ancient burial rituals.

Archaeologists discovered residue of the hallucinogenic drug in eight vessels that are shaped like upside-down poppy flowers – the plant from which it is derived.

The vessels were recovered from Tel Yehud in Israel, as part of a joint investigation by the Israel Antiquities Authority, Weizmann Institute of Science and Tel Aviv University.

Dating back to the 14th century BC, experts believe they were once used to store opium, which was consumed during burial ceremonies by family members or a priest.

Dr Ron Be’eri, an archaeologist with the antiquities authority, said that they would ‘enter an ecstatic state by using opium’ in order to ‘summon the spirit of the dead’.

Vanessa Linares, co-author of the study, said: ‘Because the opium was found at a burial site, it offers us a rare glimpse into the burial customs of the ancient world.’ 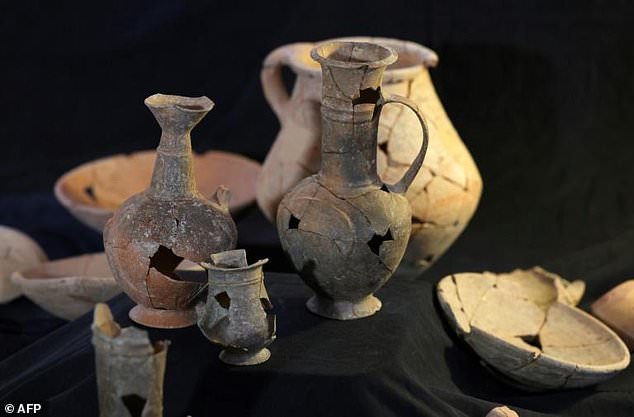 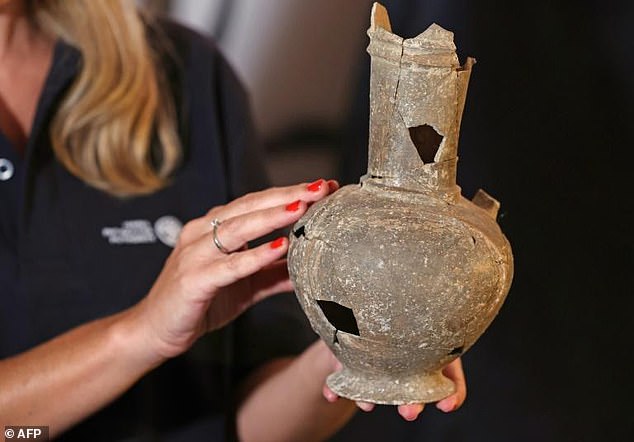 Dating back to the 14th Century BC, experts believe they were once used to store opium that was taken during burial ceremonies by family members or a priest

Historical writings from the 19th century suggest that opium was used during Canaanite burial rituals and as offerings.

This was due to vessels – known as Base-Ring juglets – discovered near grave sites having a poppy-like shape, suggesting they were used to store or ship opium.

However, this discovery is the first time traces of opium have been found on the pottery itself, providing evidence for this theory.

While humans have been known to use psychoactive drugs for thousands of years, this is now the earliest evidence of it in the world.

Cannabis residue was discovered on an altar in Tel Arad in 2020, but this dated back to the Iron Age, about 2,700 years ago. 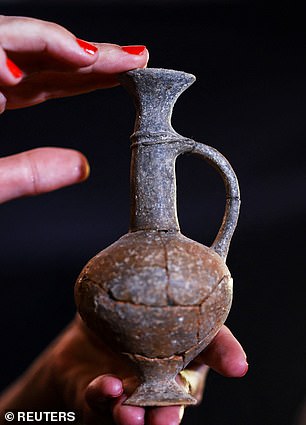 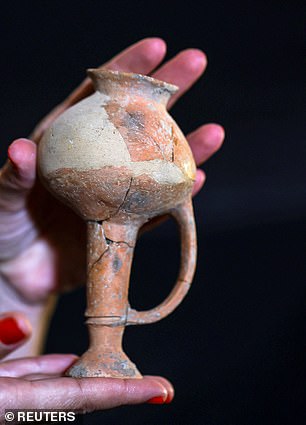 Historical writings suggest that opium was used during Canaanite burial rituals. This was due to vessels – known as Base-Ring juglets – discovered near grave sites, that had a poppy-like shape when upside down, suggesting they were used to store or ship opium

Vanessa Linares, co-author of the study, said: ‘Because the opium was found at a burial site, it offers us a rare glimpse into the burial customs of the ancient world.’ Pictured: A local open bowl that was placed as a burial offering 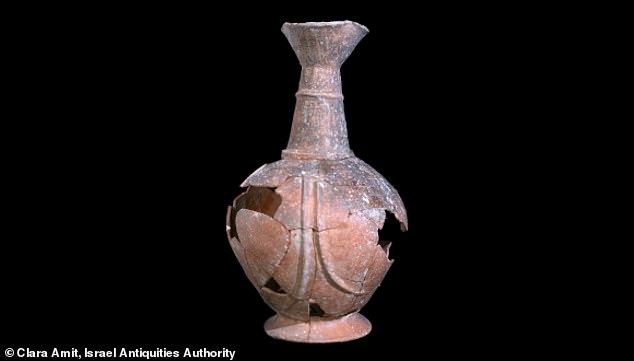 A Cypriot Base-Ring juglet. When turned upside-down it resembles a poppy-seed pod, from which opium is produced. Remnants of opium were found in the vessel 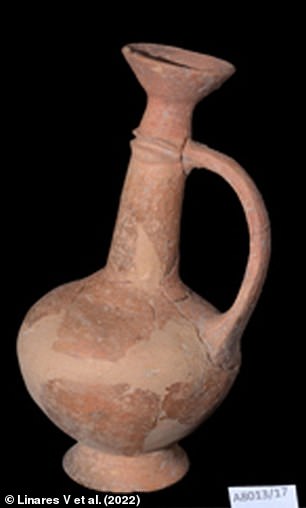 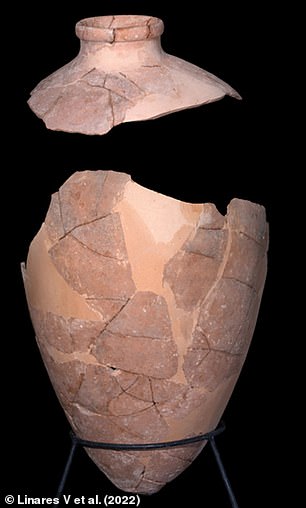 In 2012, a series of Bronze Age graves were uncovered during salvage excavations in Tel Yehud prior to the construction of new residences. Next to the graves were burial offerings – ceramic vessels intended to accompany the dead into the afterlife, including Base-Ring juglets. Pictured: A Cypriot Base-Ring jug (left) and Canaanite jar (right) in which opium residues were discovered

WHO WERE THE CANAANITES?

Canaan was a Semitic-speaking civilisation and region in the Near East during the late 2nd millennium BC.

Around 4,000 years ago, they built cities across the Levant, which includes present-day Lebanon, Israel, Jordan and part of Syria.

The Canaanites left no written records, so one of the only remaining sources of information about them is the Old Testament of the Bible, where they are mentioned 150 times.

While biblical texts suggest they were vanquished by the ancient Israelites, recent DNA and archaeological suggests the Canaanites survived and are the ancestors of the people now living in modern-day Lebanon.

In 2012, a series of Bronze Age graves were uncovered during salvage excavations in Tel Yehud prior to the construction of new residences.

They ranged from the 18th to the 13th centuries BC, and mostly contained the bodies of adults, and of both sexes.

The graves were of those who lived in ancient Canaan, a territory that included the lands of modern-day Israel and Palestine.

Next to the graves were burial offerings – ceramic vessels intended to accompany the dead into the afterlife, including Base-Ring juglets.

‘The dead were honoured with foods and drinks that were either placed in the vessels, or consumed during a feast that took place over the grave, at which the deceased was considered a participant,’ said Dr Be’eri.

In a paper, published in Archaeometry, researchers outline how they analysed organic residue in the 22 pottery vessels.

While the fragments would have been analysed at the time of their discovery, these sophisticated techniques have only been possible more recently.

They discovered the presence of opioid alkaloids and their decomposition products in eight of the vessels.

While the poppies the drug was derived from grew in Asia Minor, or modern-day Turkey, some of the pottery had been imported from Cyprus.

‘Opium was brought to Yehud from Turkey, through Cyprus; this of course indicates the importance that was attributed to the drug,’ said Ms Linares.

Opium residue was found in larger ceramic jars as well as the smaller Base-Ring juglets, also suggesting the drug’s trade was at a significant scale. 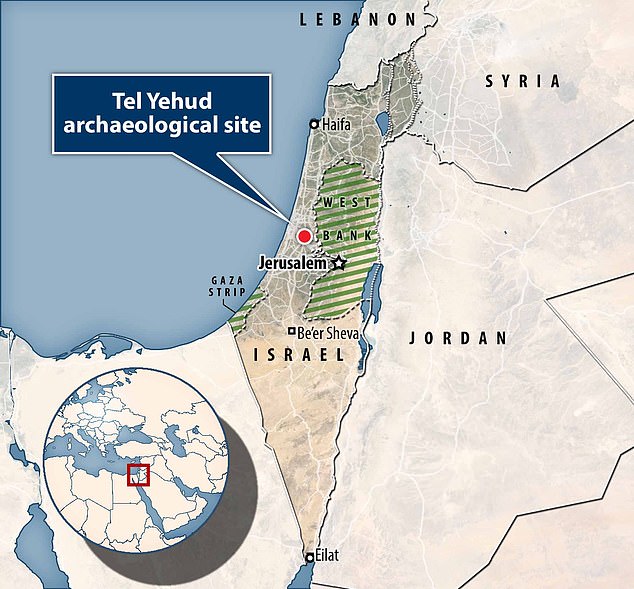 In 2012, a series of Bronze Age graves were uncovered during salvage excavations in Tel Yehud, Israel (pictured) prior to the construction of new residences

The opium-containing vessels may have been placed in graves ready for the ceremonial meals, rites and rituals performed by the living relatives.

However, the authors admit they can only speculate about the particular ways the Canaanites used the opium, as no written sources have yet been found to confirm them.

Dr Be’eri said: ‘From documents that were discovered in the Ancient Near East, it appears that the Canaanites attached great importance to “satisfying the needs of the dead” through ritual ceremonies performed for them by the living, and believed that in return, the spirits would ensure the health and safety of their living relatives.

‘It may be that during these ceremonies, conducted by family members or by a priest on their behalf, participants attempted to raise the spirits of their dead relatives in order to express a request, and would enter an ecstatic state by using opium.

‘Alternatively, it is possible that the opium, which was placed next to the body, was intended to help the person´s spirit rise from the grave in preparation for the meeting with their relatives in the next life.’

THE HISTORY OF OPIUM

Opium has been known for millennia to relieve pain and its use for surgical analgesia has been recorded for several centuries.

The Sumerian clay tablet (about 2100 BC) is considered to be the world’s oldest recorded list of medical prescriptions, and many believe the opium poppy is referred to on the tablet.

Some objects from the ancient Greek Minoan culture may also suggest the knowledge of the poppy, including  a goddess from about 1500 BC shows her hair adorned probably with poppy-capsules and her closed eyes disclose sedation.

Also juglets probably imitating the poppy-capsules were found in that period in both Cyprus and Egypt.

The first authentic reference to the milky juice of the poppy we find by Theophrastus at the beginning of the third century BC. 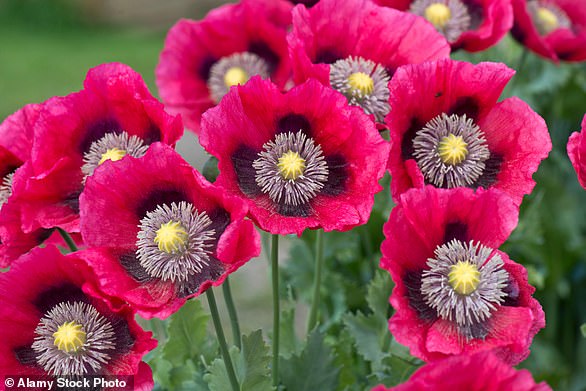 In the past, it has been argued that these juglets could have been used to hold poppy seed oil, containing traces of opium, used for anointing or in a perfume

In the first century the opium poppy and opium was known by Dioscorides, Pliny and Celsus and later on by Galen.

The Arabic physicians used opium very extensively and about 1000 AD it was recommended by Avicenna especially in diarrhoea and diseases of the eye.

Simplified preparations of opium such as tinctura opii were also used up to about 2000 in Denmark.

In the early 1800s sciences developed and Sertürner isolated morphine from opium and was the founder of alkaloid research.

A more safe and standardized effect was obtained by the pure opium.

Several morphine-like drugs have been synthesized to minimize adverse effects and abuse potential.