This Antarctic colossus is melting at a rapid rate, dumping billions of tonnes of ice in the ocean every year and pushing up global sea-levels.

Now, a UK-US team has surveyed the deep seafloor channels in front of the glacier that almost certainly provide the access for warm water to infiltrate and attack Thwaites’ underside.

It’s information that will be used to try to predict the ice stream’s future.

“These channels had not been mapped before in this kind of detail, and what we’ve discovered is that they’re actually much bigger than anyone thought – up to 600m deep. Think of six football pitches back to back,” said Dr Kelly Hogan from the British Antarctic Survey (BAS).

“And because they are so deep, and so wide – this allows a lot more water to get at, and melt, Thwaites’ floating front as well as its ice that rests on the seabed,” she told BBC News. 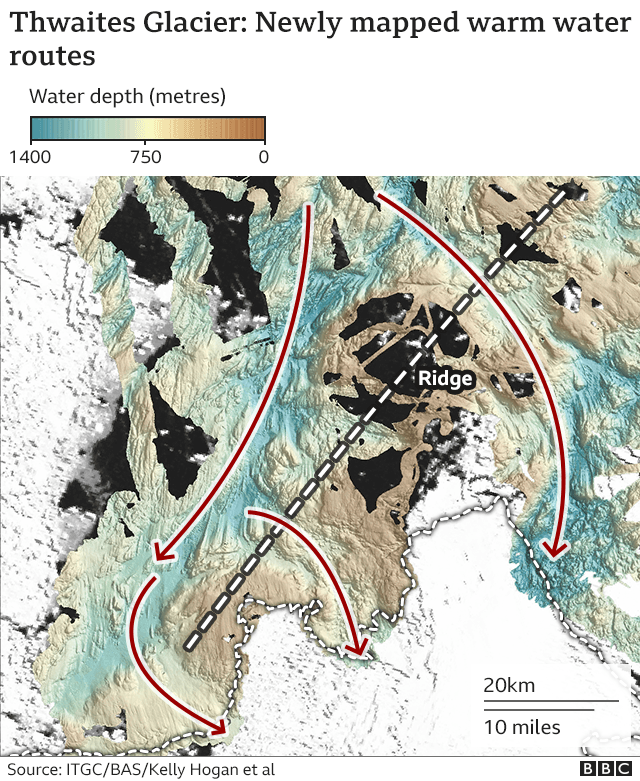 Why is Thwaites Glacier so important?

Flowing off the west of the Antarctic continent, Thwaites is almost as big as Great Britain.

It’s a majestic sight, with its buoyant front, or “ice shelf”, pushing far out to sea and kicking off huge icebergs. But satellite monitoring indicates this glacier is melting at an accelerating rate.

In the 1990s it was losing just over 10 billion tonnes of ice a year. Today, it’s more like 80 billion tonnes. The cause of the melting is thought to be the influx of relatively warm bottom-water drawn in from the wider ocean.

Currently, Thwaites’ ice loss contributes approximately 4% to the annual rise in global sea-levels, with the potential to add 65cm in total should the whole glacier collapse.

No-one thinks this will happen in the short-to-medium term, but Thwaites is considered particularly vulnerable in a warming world, and scientists would like to know precisely how fast any changes might occur. 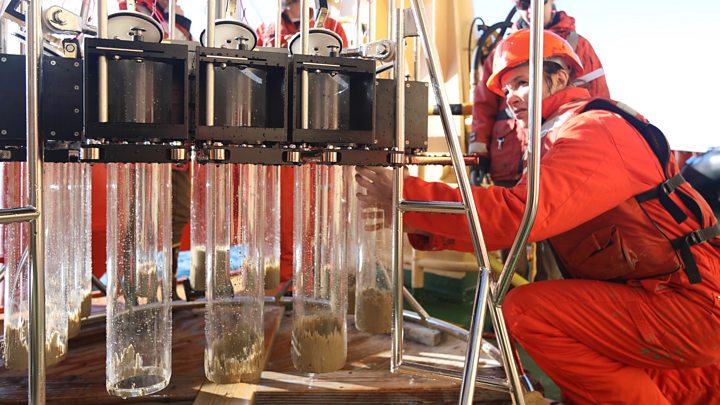 What does the latest research show?

The UK and the US joined forces in 2019 to investigate Thwaites.

Their scientists sailed a ship equipped with an echo-sounder right up to the shelf’s ice cliffs, to trace the shape of the seabed below.

A plane was also flown back and forth across the shelf to measure small variations in the pull of gravity. These deviations reflected the seafloor’s undulations under the shelf.

The two datasets taken together now provide the best view yet of Thwaites’ underlying topography. The maps trace the path of a network of deep channels that cut through a ridge, beyond which they join to form a major cavity under the ice shelf.

“The connected channels that we’ve mapped in detail for the first time are the potential pathways for deep-ocean warm water to get in and do damage at that point where the glacier is still grounded on the seabed, where it begins to lift up and float,” explained BAS colleague Dr Tom Jordan, “but also to melt the base of the ice shelf, which if you weaken will make the ice further upstream in the glacier flow faster.”

How will the new survey information be used?

Scientists need real-world data to corral their models so that when they run simulations of possible future behaviour, they get realistic outcomes.

The new information refines the volumes for ingressing warm water that can be considered possible under different scenarios.

In conducting their survey, scientists also now have a better idea of the general roughness of the seafloor.

This tells them about the sorts of speeds ice further back in the glacier can achieve as it slides across rock and sediment. What the researchers have produced, if you like, is a kind of “stickiness index” to additionally constrain the computer models.

What’s likely to happen in the near future?

At the moment, the eastern side of the ice shelf is hooked on to a large ridge, which gives it stability. But the current melting trend would suggest this situation won’t last much longer, says BAS’s Dr Robert Larter.

“When the Eastern Ice Shelf becomes unpinned, the ice will spread out and thin, eventually breaking up, as we can see is happening right now on the (central) glacier tongue,” he told BBC News. “Even before ice shelf break-up, the unpinning and thinning will reduce the buttressing effect of the ice shelf on the glacier upstream of it, resulting in increased ice flow velocity. This in turn will further accelerate thinning of the glacier and grounding line retreat.”

British and American scientists have had to temporarily suspend their investigations at Thwaites because of the Covid-19 crisis.

Teams were due to head back to the glacier this austral summer, but the location’s remoteness means the risks are too great should anyone fall ill. Once the coronavirus outbreak has been properly contained, the scientists will return, however.

“It’s amazing to go to a place like Thwaites to see the changes taking place right before your eyes,” said Dr Hogan. “When we were there in 2019, we were able to get right up to the ice shelf cliffs, and the reason we could do that and make our observations was because the icebergs and sea-ice that have always been there historically are starting to disappear.”

The latest research is published in two papers in the journal The Cryosphere, and can be accessed here and here.