Red lights may be synonymous with sex workers and Amsterdam, but a crimson hue also helps moths mate, a study has found.

Prolonged white light hinders mating but experts noted that when replaced with red light the number of eggs produced increases.

A scientific experiment based on this hunch proved the colour of the light does indeed influence moth sex life. 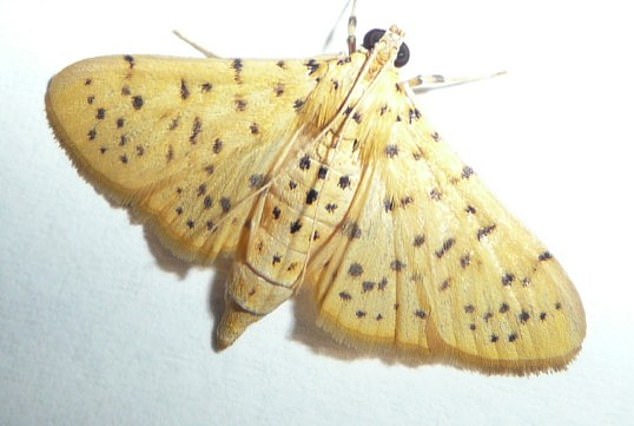 The researchers analysed how much of a specific protein was found in the antennae of male yellow peach moths (pictured), which are regularly used in labs for experiments

Lead author Dr Wei Xiao, from Southwest University in Chongqing, China, said: ‘Do you dim the lighting and turn on the red light for a romantic night in with your partner? It turns out moths aren’t so different in that regard.’

The researchers analysed how much of a specific protein was found in the antennae of male yellow peach moths, which are regularly used in labs for experiments.

They found that when exposed to medium intensity red light, the level of the proteins was highest.

Researchers say the long wavelength of red light probably penetrates further into antennae and stimulates the genes responsible for the protein and therefore has a more significant impact than other colours of light.

These proteins bind to female pheremones and their overexpression in the antennae of males makes them more sensitive to the chemicals being secreted by females.

The final part of the study involved watching how mating behaviours altered based on light and confirmed the finding.

Dr Xiao said: ‘Our study is the first to test the stimulatory effects of red light on mating behaviour and is therefore a potential springboard for research into novel conservation techniques for endangered insects.’

The full findings are published in Frontiers in Genetics.

Charred moth remains discovered on a 2,000-year-old grindstone in Australia are the earliest evidence of insects consumed as food

Scientists in Australia have uncovered the first archaeological evidence of insects being used as a food source by ancient Australian Aboriginal groups.

Particles on a grindstone discovered in the foothills of the Australian Alps were determined to be from a Bogong moth, which migrates to the area every summer.

The tool, small to be carried around by its owner, is estimated to be about 2,000 years old.

The discovery is the earliest evidence of insect food on a stone artifact anywhere on Earth, and offers a rare insight into the food culture of ancient Aboriginal people in Australia. 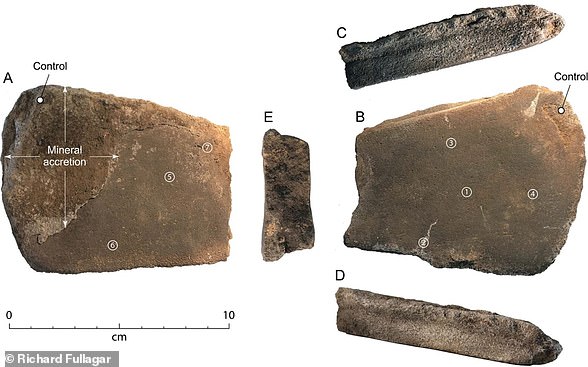 A grindstone discovered in a cave in Southeastern Australia is the first archaeological evidence that ancient Aboriginal groups harvested Bogong moths as far back as 2,000 years ago