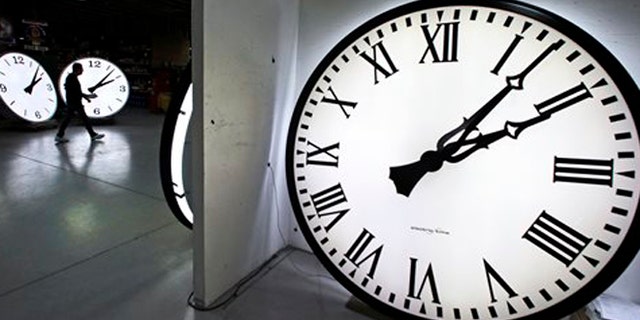 Tom Liberatore, a materials purchasing manager, walks past clocks being tested prior to shipping at the Electric Time Company in Medfield, Mass. (AP Photo/Charles Krupa)

Theoretically, we’ll gain an hour of sleep. But we’ll also be losing an hour of evening light through March 13, 2022 — when it’s time to “spring” forward. The tradition of changing clocks officially began in the U.S. on March 19, 1918.

Here’s what you need to know about the century-old tradition.

When did daylight saving time start?

It was established during World War I as “a way of conserving fuel needed for war industries and of extending the working day,” the Library of Congress explained in a post online.

But it was only temporary. The law was repealed about a year later, on August 20, 1919, as soon as the war was over.

“However, the sections of the 1918 law, which had established standard time zones for the country, remained in effect,” the library said. “In 1921, Congress readjusted the western boundary of the standard central time zone, shifting parts of Texas and Oklahoma into this zone.”

What are the rules?

Daylight saving time and time zones are regulated by the U.S. Department of Transportation (DOT) under the Uniform Time Act. Daylight saving begins each year on the second Sunday in March, starting at 2 a.m.

“If a state chooses to observe Daylight Saving Time, it must begin and end on federally mandated dates,” the DOT says.

Does everyone change their clocks?

No. Hawaii, most of Arizona, and a handful of U.S. territories — including American Samoa, Guam, Puerto Rico and the Virgin Islands — do not observe daylight saving time.

A bill called the “Sunshine Protection Act,” which allows Florida to remain on daylight saving time year-round, was passed in the state House and Senate in March. Gov. Rick Scott then signed the bill into law. However, Congress still needs to amend existing federal law to allow the change.

If approved by the federal government, this will effectively move Florida’s residents one time zone to the east, aligning cities from Jacksonville to Miami with Nova Scotia rather than New York and Washington, D.C.

Why does it matter?

There are several reasons why officials believe daylight saving time is beneficial.

Some say it saves energy because people tend to spend more time outside when it’s lighter out. The DOT claims it also “saves lives and prevents traffic injuries,” because visibility is better.

However, some believe the process is a “hassle.”

Proponents of scrapping daylight saving time argue it’s generally unnecessary, disturbs sleep patterns and has recently become even more complicated. In 1986, Congress extended daylight saving from a six- to seven-month period and extended it again in 2005 to eight months — mid-March to mid-November.

“Congress really gave us a wise compromise in 1966 with six months of standard time, but because of the lobbies on behalf of daylight we now spring forward in the middle of the winter,” Michael Downing, author of “Spring Forward: The Annual Madness of Daylight Saving,” told Fox News in 2015.

Disagreements over daylight saving aren’t new. In 1965, before the Uniform Act was passed, 71 major cities in the U.S. with a population of over 100,000 were using daylight saving, while 59 others were not.

“People do not like the hassle of adjusting their clocks twice a year,” Downing added.

Fox News’ Matt Finn and The Associated Press contributed to this report.