If you’re still drinking full fat Coca-Cola, a new study may be the final straw in converting you to the diet variety.

Swiss Scientists have warned that consuming foods and drinks with even moderate amounts of added sugar doubles fat production in the liver.

Coca-Cola contains fructose and sucrose, which promote hepatic lipogenesis – the synthesis of fatty acids around the liver – even in small amounts, the experts found.

Worryingly, production of fat in the liver is still sustained even after sugar consumption stops, the experts say, and can increase your risk of fatty liver disease and Type 2 diabetes. 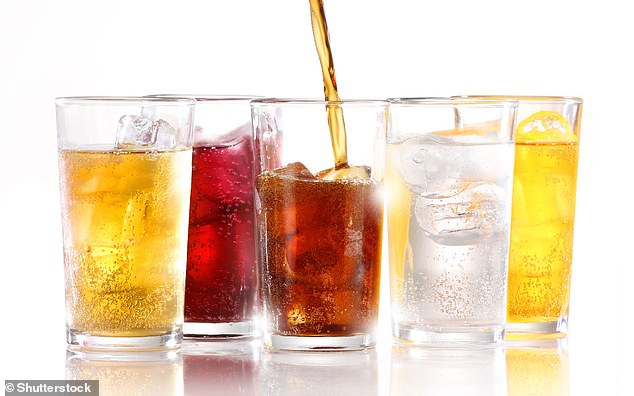 Even moderate amounts of added fructose and sucrose double the body’s own fat production in the liver, researchers from the University of Zurich have shown

‘Eighty grams of sugar daily, which is equivalent to about 0.8 litres of a normal soft drink, boosts fat production in the liver,’ said study author Philipp Gerber of the Department of Endocrinology, Diabetology and Clinical Nutrition at UZH.

‘And the overactive fat production continues for a longer period of time, even if no more sugar is consumed.’

Fructose, or fruit sugar, is in many sweetened drinks, and is added in the form of high-fructose corn syrup, particularly in the US.

Fructose starts its journey around the body in the intestines, and is delivered directly to the liver, where it is converted into fat.

It’s found naturally in many plants and honey, but has become more common in modern diets through refined sugar and corn syrup.

Coca Cola contains high fructose corn syrup, but diet sodas, like Diet Coke and Sprite Zero, do not and are instead sweetened with artificial substitutes.

Researchers wanted to know if consuming too much sugar had any other harmful effects if consumed regularly – and, if so, which sugars in particular.

It has also been debated whether fructose drives diabetes, high blood pressure and obesity, as well as non-alcoholic fatty liver disease.

For the study, researchers recruited 94 healthy young men between the age of 18 and 30 years old.

Participants were divided into four groups, each of which drank a different type of beverage every day for a period of seven weeks.

They either consumed a drink sweetened with either fructose, glucose or sucrose (table sugar which is a combination of fructose and glucose), while men in the fourth control group abstained from drinking sugar-sweetened beverages.

Three times a day, the participants drank 2 decilitres (dL) of their beverage (200ml), containing 13.3g/dL of sugar, for seven weeks.

The researchers then used tracers – labelled substances that can be traced as they move through the body – to analyse the effect of the sugary drinks on the lipid metabolism.

Interestingly, the participants overall did not consume more calories than before the study, as the sugary drink increased the sense of being satiated and they therefore reduced their calorie intake from other sources.

But the results showed that even moderate amounts lead to a change in the metabolism of test participants.

‘The body’s own fat production in the liver was twice as high in the fructose group as in the glucose group or the control group – and this was still the case more than twelve hours after the last meal or sugar consumption,’ said Gerber.

Sucrose, or table sugar, is made commercially from sugar cane and sugar beets and is the is the sugar we most commonly consume.

Until now, it was thought that fructose was most likely to cause such changes.

‘Our results are a critical step in researching the harmful effects of added sugars and will be very significant for future dietary recommendations,’ said Gerber.

The World Health Organisation recommends limiting daily sugar consumption to around 50 grams or, even better, 25 grams.

Meanwhile the NHS recommends adults have no more than 30g of free sugar – sugar added to a food or drink – per day.

Popular treats hide a surprising amount of sugar – a can of Coca Cola (35g of sugar) or one Mars bar (33g) contain more than the maximum recommended amount.

The study has been published in the Journal of Hepatology.

How to remove fructose sugar from YOUR diet

Easy? Not exactly. But most food that is boxed, bagged or canned has added sugars. A helpful tip is to shop on the outer edges of your grocery store. That is where there tends to be more fresh products with no added sugar.

Make your own sauces and dressings

This is time consuming but worth it. The sauces and dressings you make at home can help remove a large amount of added sugar that is found in the pre-made ones.

Some of your favorite yogurt has more sugar in it than a candy bar. This doesn’t help when you’re trying to lose weight. Buy plain yogurt instead and add honey or fresh fruit to get more natural sweetness

It is best to avoid juices and dried fruit are delicious but full of sugar. Make your own at home by buying fresh fruit instead.

It should be no surprise that these drinks are bad for you. If you don’t feel like you can go without your soda fix then try to limit yourself to a certain amount a week.

Do you have a sweet tooth? Still treat yourself to something sweet by eating dark chocolate instead. It’s better for you and has great health benefits such as lowering blood pressure and risk of a heart attack.

Stay away from mixed drinks

There is a lot of sugar in drinks such as a coke and rum or even a gin and tonic. Avoid these sugars by ordering wine, spirits with no mixer or mixing with soda water.